Reading and Leeds Festival 2019 has today announced even more names across the music stages, and revealed the world class comedy acts on the Alternative Stage. They’ll be performing alongside already announced headliners The 1975, Post Malone, Twenty One Pilots and Foo Fighters at the famous Richfield Avenue and Bramham Park sites this August bank holiday weekend (23 – 25 August). Tickets are available here.

Comedy is an essential part of Reading and Leeds and today the first wave of funny acts have been announced. Panel show favourite Josh Widdicombe will headline the Alternative Stage, entertaining audiences with his quick wit, guaranteed to have festival-goers in stitches. Having found fame as a regular on Channel 4 series The Last Leg,Widdicome has continued his storied career with stellar stand-up shows and rave reviews for his BBC sitcom Josh.

Comedy genius Bridget Christie is ready to take on the Alternative Stage crowds this summer with a headline set. A regular on the comedy scene since 2004 where she won the Foster’s Edinburgh Comedy Award the multi-award winner has since gone on to become a regular favourite on TV and radio.

Alongside the Alternative Stage, more names have been added to the remarkable music line up across the festival weekend. British singer-songwriter Mabel joins the BBC Radio One Stage bill ahead of the release of her anticipated debut album ‘High Expectations’ this July. Fans can expect to hear hits including 2017 platinum record ‘Finders Keepers’ and 2019 top 10 single ‘Don’t Call Me Up’. Irish rock band Picture This will thrill fans when they bring their eagerly anticipated new album, MDRN LV to life alongside indie rockers CHILDCARE. Rap-rock morphers The LaFontaines join the BBC Radio One Dance Stage with rising rap star Barny Fletcher and pop queen Kim Petras. Laura Jane Grace & the Devouring Mothers will bring songs from their emotionally charged debut album ‘Bought To Rot’, the undisputed kings of ‘fashion-art’ rock Palaye Royale join the Pit Stage bill with Californian punk rockers Plague Vendor. Merseyside crew Queen Zee will not hold back bringing their quirky style to The Pit.

American punk rock band Bleached will head to the festivals off the back of their US tour and siblings Sons Of Raphael will also be crossing the pond to bring their unrelenting energy for performances not to be missed. Oddity Road will deliver their heavy riffs and tight infectious songs, Philadelphia singer-songwriter Pink Sweat$ will bring his soothing R&B jams and Kawala, who are currently making waves within the indie music scene since the release of their first single, ‘Small Death’, will also be joining the Festival Republic Stage.

East London drill rapper Unknown T best known for his breakout hit Homerton B will be making his Reading and Leeds debut on the BBC 1Xtra Stage, as well as rapper and producer NAV who will be bringing his trademark vocals and hypnotic trap beats to the festival following the release of Billboard number one sophomore record ‘Bad Habits’. Elsewhere, US rapper YBN Nahmir is set to deliver an unforgettable performance, while  BiG HEATH, DigDat, Geko and Tyla Yaweh will also be joining the the BBC 1Xtra stage bill. 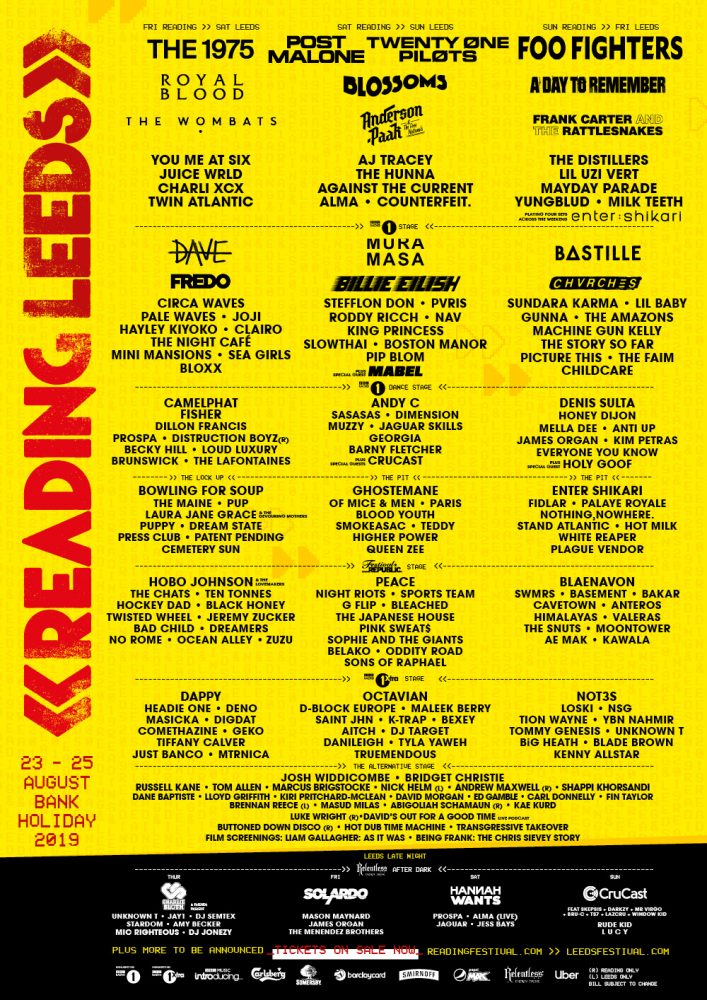 With hundreds of acts set to play, Reading & Leeds will again be the unmissable festival weekend of the summer – defining and celebrating the sounds of modern groundbreaking music, as well as a world-class comedy line up.