Record Store Day came into being in 2007 when over 700 independent stores in the USA came together to celebrate their unique culture. The UK followed suit, and 2015 will see the eighth celebration of the UK’s unique independent sector. Although mixed feelings surround the day and how popular it’s become, I am most certainly in favour of celebrating this day when independently owned record shops come together with artists to celebrate the art of music. Supporting independent stores and artists, live music and lots of exciting new vinyl releases and special re-releases – what’s not to love?

Whether setting out to invest, or simply have a good time, here’s how some of us here at Gigslutz spent Record Store Day 2015…

My first Record Store Day experience was back in 2010 at Rough Trade East, where turning up at 6am was a reasonable hour to get what I was after. Record Store Day in Kingston, however, is done a bit differently. Alarm bells were set off and mass panic ensued when Banquet Records announced on Twitter on Friday that the first person had arrived in the queue at 3… IN THE AFTERNOON!

My boss graciously allows me to leave early but, despite arriving at 6:15pm, I’m still 12th in line for all the vinyl-shaped goodies. The long hours are passed with free pizza, courtesy of Banquet Records, and convincing passing drunks that we’re queuing for a Zayn Malik signing. Before long, the sun has risen over Kingston High Street and local businesses emerge as early as 5am so we can take breakfast orders and pump warm caffeine into our systems.

Although 14 hours is a rather long time to wait, it’s more than worth it to stagger back home with a plastic bag full of Record Store Day releases including Bowie, The Manic Street Preachers and Suede amongst others. It’s also great to see how the love of music can pull a community together; I just hope the future of Kingston holds against plans of gentrification, as we would most likely lose precious memories such as these.

It’s a nice early start that brings me to the doors of Marrs Plectrum Records in Peterborough. Even though the shop is the smallest independent in the UK, the customary RSD queue is in place. A great atmosphere and connection with the store is created, with bacon sarnies, as well as cups of tea and coffee being served to the eager customers outside.

Eager customers indeed, with the earliest arrival being just before 4am! By the time the doors open, the queue has started to elongate, a sign of a hopeful RSD for Marrs. I myself obtain Gaz Coombes’ ‘Detroit’ 10″, a great tune taken from his new LP, Matador. For many, where ever your nearest record shop, I can see this being a busy and possibly expensive day out!

Waking up at 7.00am, like a child on Christmas Day morning, I’m pretty sure that Record Store Day is going to be almost as magical. Not only because of the bands performing in the stores, but for the buzz in there as customers pile in and the smiles on their little faces as they clutch the gifts they’ll be giving themselves. It’s a wonderful life… It’s a wonderful format… Happy Record Store Day one and all.

Unfortunately, the reality is more like The Grinch, with people who don’t care for the music or the format ensuring they’re first in line in order to sell the albums on for a profit. “eBay tossers” is how Johnny Marr has referred to them and he’s spot on. Copies of his ‘I Feel You’ 7″ were selling for over £30 on the auction site, despite Marr tweeting to not pay the prices.

I end up with Future Islands’ In Evening Air, as well as a Walker Brothers collection and Spandau’s debut from Vintage Vinyl. So, maybe Record Store Day isn’t for me – I could pick up any of the albums I got on any given Saturday. But at the end of it all, a vinyl is for life, not just for Record Store Day. Or eBay.

Record Store Day is always there for those of us who enjoy continuing to buy hard copies of music (the way it should be!) Downloading music doesn’t compare to the feeling you get when you find the album you’ve been on the hunt for, for months, in your favourite independent record store.

I begin my Dublin Record Store Day trek with HMV on Henry Street which has 40% off all vinyl; their selection is great – everything from chart topping James Bay, Ed Sheeran and Hozier, to crazy reductions on Fleetwood Mac.

HMV has live music throughout the weekend in their basement, one band being ‘The Mighty Stef’.  A band from Dublin who stop by whilst on their Irish tour, promoting their capturing rock album, Year Of The Horse.

I continue to check out Tower Records on Dawson Street, which is a vinyl haven. Everywhere in sight has reduced albums and singles. I spot HAIM, The Strypes and Arctic Monkeys in the big sale section; there’s also a ton of Rolling Stones and The Who albums on sale, right as you squeeze in the door, as well as exclusive editions of ‘HamsandwicH’s vinyl.

It’s safe to say it’s a good day, filled with browsing and buying records, Dublin got it right this year.

With Glasgow housing a number of independent record stores, RSD 2015 promises to build on the success of 2014 and be another popular day for music lovers attracted to the various events taking place in the city.

Love Music opens their doors at 8.30 am (although a couple of lads called Dwayne and Edd decided to start queuing some 20 hours before). Entertainment kicks off at 1.30pm on the day with Fini Tribe , Randolph’s Leap , C Duncan , James King & the Lone Wolves , Colonel Mustard & The Dijon 5 , Frankie Iero (ex My Chemical Romance), The Mickey 9s , Gerry Cinnamon , Finn LeMarinel and Tuff Love performing.

Monorail Music opens a little later at 9.00am, with cakes and entertainment from DJs, Rose McDowall, James Yorkston, Pennycress and Halfrican, while Mixed Up Records attracts sleepy-heads by opening at 10.00am.

For those not chasing vinyl but wanting to support and experience the day, the Record Factory open their doors at noon and, with the sun shining and a massive beer garden featuring live acts including My Baby (Seasick Steve tour support), I cannot think of a better way to relax.

Admittedly, I’m not a fan of queuing, lack of sleep or early mornings… So, it’s no surprise that, despite my love of music, I don’t manage to get hold of any of the day’s special releases by the time I arrive at Berwick St at 11am. I’m under no illusions that I’ll be able to nab that limited edition Foo Fighters Laundry Room Songs or Courtney Barnett’s ‘Kim’s Caravan’. But, as I see the queue from Sister Ray still winding around two corners upon my arrival, I can’t pretend I’m not a little disappointed.

However, a wander across the road to Reckless Records soon sorts me out. As I’m not dedicated enough to get my hands on any of the new releases, I treat myself to an essential record for any collection: Sex Pistols Never Mind The Bullocks. So, all is certainly not lost. Now I can step out and enjoy the sunshine, live music, beer and falafel.

As 6Music’s Shaun Keavny curates proceedings from the Berwick St stage, the sun shines down on the mass of smiling people of all ages, stretching as far back as the eye can see: all united in their love of music.

Young Knives start off the day’s live music, before the wonderfully summery, ska-fused tunes of LazyTalk flow from the stage as hoards of music lovers bounce to the uptempo beats. Although I miss John Cooper Clarke, I can’t think of a better reason to be gathered in the sunshine, plastic cup in hand, live music blasting through the air, than to be celebrating our love and support for independent record shops. 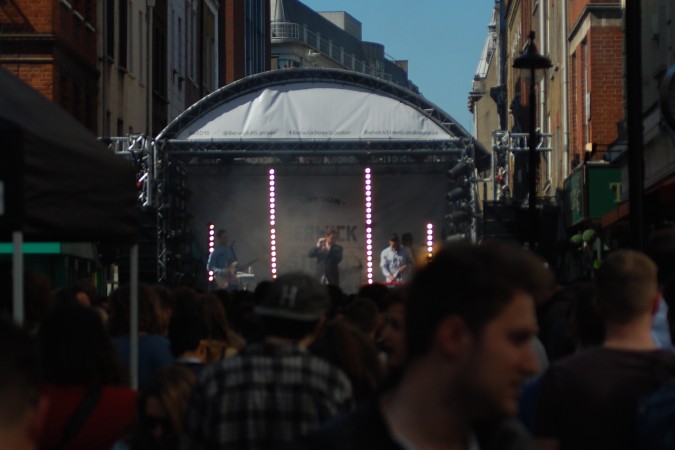 LazyTalk on stage at Berwick Street