Fans of Joy Division and New Order will be overly joyed to see a reissue of the long since out of print Kevin Cummins book Juvenes which was originally published in 2007. This new edition features previously unseen contact sheets with fascinating detail, newly conducted interviews with surviving band members plus additional material and archive. There are a number of editions for your consideration, but be quick as some might be close to being sold out. There’s a 100 only edition that includes 8 x 10 photo print of Ian Curtis which isn’t featured in the book, housed in a cloth bound foil stamped clamshell box. Then there’s a signed edition all for the measly sum of £30, which is not to be sniffed at.

As you know from Kevin’s work with Joy Division, his work depicts Manchester in it’s grim, suburban and down trodden state, a bygone era. The band are often shown as hunched over with their long winter coats trapsing through the back streets. Similarly the band on stage showcase a ramshackle kind of affair, nothing like the lavish setting the band took on when filling out stadiums when New Order were formed, it’s Ian that takes centre stage, his silhouette lights up the book in many forms. His gaunt look, often wild arms and hips flailing, many have tried to copy Curtis yet his demeanour and iconic figure will never be bettered, Kevin was in the right place at the right time to capture these stunning moments. 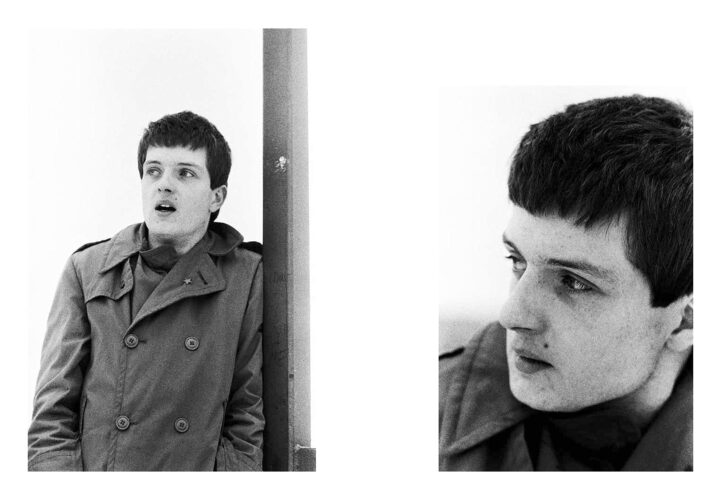 One of the most poignant things in the book is the new interview with Peter Hook where he discusses with Kevin the photos plus the Orchestrated Joy Division night held at the Royal Albert Hall, London back in 2018. Both acknowledge the emotion edge to the evening as the songs they both knew so well were played in a setting and with a sound that lifted the sounds to new heavenly heights, both acknowledge the evening was very emotional. No doubt this setting in the huge hall was a million miles away from when Kevin first shot the band as Warsaw supporting the Buzzcocks in 1977 and with such differences comes the thought that the self-taught Cummins would not doubt of funded the camera, reels and dark room to start this whole process of capturing and treasuring these masterful photographs.

This vastly interesting and exceptionally lavishly designed book is straight out of the top draw, not only of interest to the fans of Joy Division and New Order but for new fans and music fans alike, the work of Cummins and Joy Division goes hand in hand and this new book fits right at the top of anyone’s collections.

Juvenes can be purchased via the following links. 100 copy edition. Signed edition.

BOOK REVIEW: The Beatles – Get Back hardback book