In between performing at every UK festival under the sun and signing a lucrative record deal with Polydor, Sam Fender has found the space to release the powerful ‘Dead Boys’.  The track itself is his rawest statement to date; tackling the issue of male suicide rates, while heartbreakingly make listeners melt with his honeyed vocal.

The lamenting ‘Dead Boys’ sets Fender head-and-shoulders above the rest in terms of striking songwriting abilities.  Musicians radiating the confidence to tackle imperative issues, such as the stigma surrounding male suicide, are few and far between.  Fender, however, offers us an effortless hand in consolidation and a metaphorical shoulder to cry on.  It is big, it is bold, and it is nothing less than stunningly inspiring.

‘Dead Boys’ however, is not the only treat Fender has whipped out from under his sleeve this week.  Alongside the track (which was premiered via Annie Mac on BBC Radio 1) the singer/songwriter has cemented twelve UK tour dates for this coming October/November.

Kicking off on October 30, at York’s Fibbers, the tour shall see Fender gracing the likes of the legendary King Tut’s in Glasgow, Soup Kitchen in Manchester and The Castle & Falcon in Birmingham, before concluding with a gigantic homecoming show at Newcastle University.  The latter show takes place on November 17, with tickets for all upcoming tour dates available to purchase from Friday 17 August. 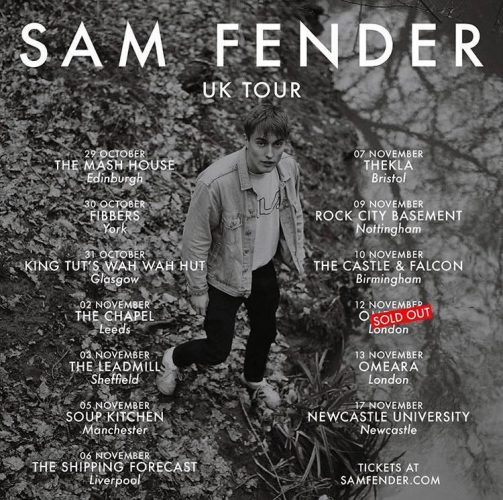