Wireless Festival 2019 is set to take place between July 5-7 and will be headlined by Cardi B, Migos, Travis Scott and A$AP Rocky.

A heavyweight lineup dripping with talent has been announced for Wireless Festival 2019.  The first day of festivities, taking place across Friday, July 5 will be co-headlined by Cardi B and trio Migos.  Elsewhere, expect to see the ethereal Ella Mai, Manchester MC Bugzy Malone, IAMDDB and veteran DJ, Tim Westwood, also.

Saturday 6 July will be headlined by hip-hop superstar Travis Scott, who will be supported by the likes of Young Thug, Stefflon Don, Sawettie, DJ Semtex and Lil Uzi Vert.

Elsewhere on Sunday 7 July, you can expect to see AJ Tracey, Flohio and Lady Sanity.

The Wireless festival line-up comes after organiser Live Nation received criticism after last year’s event received complaints regarding vulgar language, drug taking and anti-social behaviour.  This year’s event has been granted a license to go ahead as long as performers avoid “banned or obscene songs”  and not to “offend the general public” with exposing clothing.  Stricter noise levels are now also in place due to Wireless taking place in Finsbury Park, a setting close to the public.

General Admission and VIP Tickets are available for purchase from here. 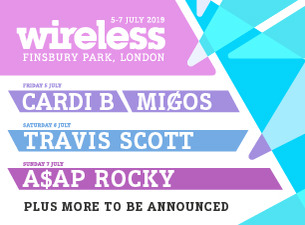