It’s official: it’s been exactly a week since 85,000 of the most passionate, hardcore music fans in the UK journeyed on their annual pilgrimage to the 22nd edition of none other than Scotland’s paramount music festival, T In The Park.  In this in-depth review, we look back over that unforgettable (for some) weekend and pick out the best bits.  T In The Park: One Week On Round-UP.

Despite the few teething problems, the first T In The Park to be held in the grounds of the mighty Strathallan Castle was both sensationally electrifying and remarkably unforgettable.  Fronted by previous Glastonbury headliners, Kasabian, the man behind the 2013 takeover track, ‘Levels’, Avicii, and the iconic Noel Gallagher and his High Flying Birds; it’s fair to say that the 2015 musical celebration of T In The Park was fabricated from the same elements which compose dreams.

Main stage openers, Glaswegian synthpop trio, Prides, made living history by becoming the first magnificent act to have the honour of gracing TITP’s biggest, and most renowned stage.  Following in their footsteps on the main stage, were the Jarman brothers, The Cribs, and a slightly underwhelming performance from  a tired looking Liverpudlian trio, The Wombats.

Friday also saw: a problematic set from Kent duo, Slaves – who thankfully managed to overcome a broken snare drum and deliver a frenzied performance – on the Radio 1/BBC 3 Stage; a very indie affair from Coasts, who attracted a crowd of glittery, head-banging teenagers to the BBC Introducing tent with tracks from their forthcoming  self-titled debut album such as: ‘A Rush of Blood’ and ‘Oceans’; and Hot Chip, who’s exhilarating blend of electric synthesised dance pulled in an colossal crowd to King Tut’s Wah Wah Tent. 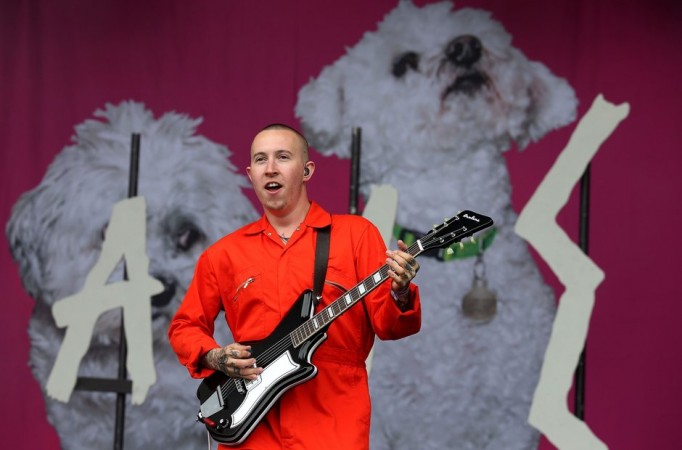 Warming up for headliners was the man, branded by Morrissey as being ‘force-fed’ to us, Sam Smith, who’s flawless performance brought covers of the late Amy Winehouse and Diana Ross to the table.  But the night however, belonged to four men from Leicester (or Les-tah as they would say.)

Doused in the same florescent pink featured on their latest, phenomenal record, 48:13, Kasabian pumped through an hour-and-a-half set with slick style, sophistication and not to mention adrenaline-fuelled tunes to boot.  ‘Fast Fuse’, ‘Vlad The Impalor’ and ‘L.S.F’ all made traditional appearances while being accompanied by 48:13‘s lead tracks, ‘Bumblebee’, ‘Stevie’ and ‘Eezeh’.  Up there with one of Kasabian’s best performances, the band poured their heart into TITP, signalling a fresh era of uncontrollable energy from the band and the correct way to end the first night of the music extravaganza.

Wiping the hangover from your eyes, the Saturday edition of T In The Park was off to a flying start when Scotland’s “biggest independent band” and Gigslutz favourites, The LaFontaines, found themselves bringing their concoction of hip-hop-rap-pop to the Main stage.  With a tight bundle of die-hard fans knitted into the ever-growing crowd, The Fonts preformed a star-studded set – something that frontman Kerr Okan has described as a “bucket list moment”.

Following on, for the first time, during the indie parade of Circa Waves on the Radio 1/BBC 3 Stage, the sun shone through the clouds like a startling beacon of light, lifting the spirit of the hundreds of hungry teenage fans, waiting in the wings to bounce around to ‘T Shirt Weather’, ‘Stuck In Your Teeth’ and ‘Get Away’.  Although succeeded by a slightly-subdued set from ruffians, Palma Violets, it was Marina & The Diamonds performance in the King Tut’s Wah Wah Tent who held the key (and the secret) to creating an unforgettable afternoon of live music.

Slick and sexy in a foxy purple cat suit;  Marina brought her glittery Froot lovers to the peak of climax during her roaring forty-five minute set.  Blending elements of The Family Jewels (‘Not A Robot’, ‘Oh My God!’), with her former alter-ego as a ‘Bubblegum Bitch’ and proving she still possessed a part of Electra Heart; Marina’s cocktailed performance of archaic and new-fangled tracks lit up the stage and made us wonder why 2015 was the year Marina only just lost her virgini-T. 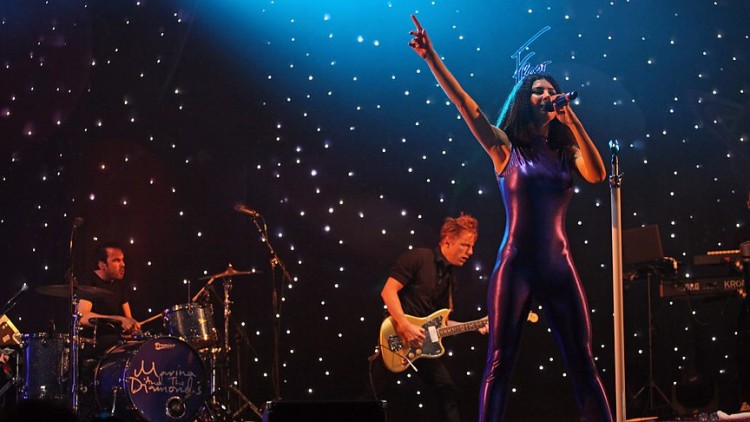 Keeping in King Tuts’, the modern soul collective from London who’re worth the hype and more, Jungle, brought the preppy pop vibe to a swooning suggestive halt, thanks to tracks such as ‘Julia’, ‘Lucky I Got What I Want’ and ‘The Heat’.

As the evening drew on, The Vaccines made their death-defying return to T In The Park with a heavily-dominated English Graffiti enhanced set.  But, while the afternoon may have belonged to Marina; the evening was about one band, and one band alone.  Four syllables; four members; two albums; one undeniably genius set.  The Libertines: take a bow.

Appearing on-stage and rushing straight into ‘The Delaney’, Pete Doherty, Carl Barat, John Hassall and Gary Powell were a bunch of absolute crowd pleasers, roaring through fan favourite tracks such as ‘What A Waster’, ‘What Katie Did’ and ‘I Get Along’.  The sparkling connection between The Libs’ frontmen was astonishing to witness, making it unbelievable to imagine that this bands blood was tainted with sourness.  Stealing the show and being the highlight of the entire weekend, the Scottish lovers cried and embraced each other during The Libs’ final track, ‘Don’t Look Back Into The Sun’, sealing the deal of knowledge: this four-piece are on fire, and their new record, Anthems For Doomed Youth, is about to be anything but ordinary.

So, how do you follow The Libertines?  For DJ, Avicii, it was a crowd surge and a lot of unsmiling faces, but for Manchester lads, Courteeners, who headlined King Tut’s Wah Wah Tent on Saturday night (following a jam-packed Proclaimers set, which seen a riot of Scots trying to break into the maximised capacity tent) they managed to follow and make history in supreme style.

The Courteeners third TITP seen Liam Fray and his band of merry men taking the vivacious atmosphere into their stride, allowing every chord of every anthem to douse the swarm in King Tut’s with a sense of overwhelming gratitude.  ‘Small Bones’, ‘Bide Your Time’, ‘Please Don’t’ and fan favourite, ‘Cavorting’ were all preformed to a mesmerising standard, while of course ‘Not Nineteen Forever’ and the ritualised closing track, ‘What Took You So Long?’ left the crowd gushing with euphoric bliss.  Throw an Oasis cover and a tribute to The Libertines (‘Here Come The Young Men’) into the mixture, and the results were phenomenally outstanding.  If there’s one band who know how to pull an absolute banger of a party out of little expectation: it’s Courteeners.

“Sixteen! So sweet” heckles a white-clad Ellie Roswell during her guttural performance as frontwoman of one of the most innovative new bands on the festival circuit; the howling Wolf Alice.  Due to the release of their debut, My Love Is Cool, the four-piece, who opened the Radio 1/BBC 3 Stage on Sunday July 12th, attracted a fantastic range of ages (not to mention dancing abilities) to their set; making them perhaps one of the acts over the weekend who have the ability to appeal to absolutely everybody.

Scottish veterans of the festival, The View, seen their first show at Strathallan (yet their eighth TITP set) go down a treat on the Main stage, where frankly the entirety of the Scottish population had seemed to congeal into one voice.  Running through a festival set for the ages, The View found themselves belting out undeniable classics (‘Grace’, ‘Wasted Little DJ’s’, ‘Skag Trendy’ and of course ‘Same Jeans’) and having the crowd in the palm of their hands, with their hearts in their mouths. 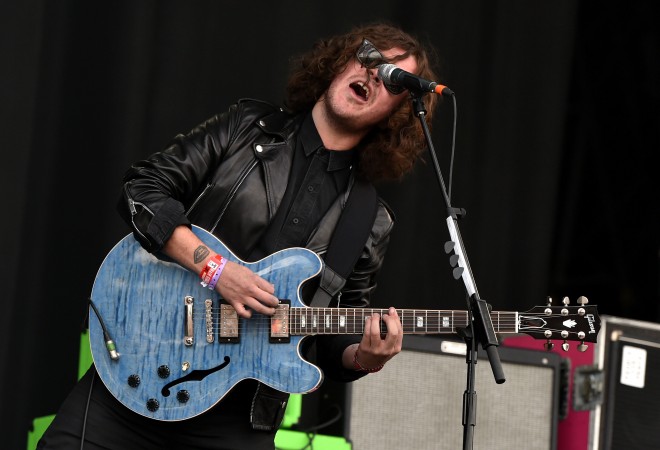 Everything Everything brought their cult sounds and matching regal red flannel jackets to the King Tut’s  tent to perform a spellbinding, career-spanning set, while over on the Radio 1/BBC 3 stage tension was rising as the wait for Catfish & The Bottlemen was brought to an abrupt halt, due to the arrival of the biggest breakthrough act of this year on stage. Storming through tracks from their debut album, The Balcony, the quartet put on a roaring, humble performance, attracting one of the biggest crowds of the entire weekend.

A quick dash over to King Tut’s allowed the Catfish-lovers to witness the very end of the legendary former band of The Smiths’ Johnny Marr, Modest Mouse‘s set; which boasted a perfect balance of oxymoronic chilled adrenaline, as (what seems like) the entire festival geared up for the on-slaughter which was taking place at half past 7 on the Radio 1/BBC 3 Stage.

Making his triumphant return to TITP, a Wimbledon lad stepped out centre stage to a whirlwind of applause, tears and beaming smiles.  For many, the final day of TITP was their first glimpse at one of the most talented musicians in the UK.  Slipping into ‘Limits Lie’, ‘Don’t You Find’ and the classic ‘Salvador’, Jamie T, made himself at home.  A slot dedicated to uncontrollably obsessed Jamie T fans, the twenty-nine year old pummelled his way through fan favourites, such as an acoustic version of the colossal ‘Back In The Game’, a resounding rendition of ‘Sheila’ and ‘368’.  Finishing on a double sucker punch of ‘Sticks n’ Stones’ followed by ‘Zombie’ (which created one of the biggest pits Strathallan has had the honour of witnessing) Jamie T blew the minds of the lucky festival goers, and implanted the idea that there isn’t a man at the moment who has the ability which he possesses.

The man who claims he got “caught in the man’s machine” was only going to be bettered by one act on the closing night at TITP: which was of course Sunday night main stage headliners, Noel Gallagher’s High Flying Birds.  With two ‘solo’ records in his back pocket (while planning a third as we speak) the senior of the two famous Gallagher brothers took to the stage and became the ultimate showman; designing a set which automatically appealed to everybody: old, young, new fans or ancient obsessive’s; there was something for everybody.

“You like Oasis, don’t you?” Gallagher rhetorically asked before jumping into Oasis’ ‘Fade Away’.  The hilariously iconic ‘Digsy’s Dinner’ was dedicated to the man who paraded his wares on the Radio 1/BBC 3 Stage only moments before, while ‘The Masterplan’, ‘Whatever’, surprisingly ‘Champagne Supernova’ and of course, ‘Don’t Look Back In Anger’, all got worthy mentions.

Between the Oasis tracks however, Noel and his High Flying Birds promoted their new record, Chasing The Sun, in the most melodically beautiful way possible.  ‘Lock All The Doors’, ‘Riverman’, ‘In The Heat Of The Moment’ and ‘The Girl With X-Ray Eyes’ all got gracious nods, swooning the gigantic crowd gathered below Noel’s very feet, while being entwined with traditional tracks from the High Flying Birds’ self-titled debut LP, ‘Dream On’, ‘AKA…What A Life’ and ‘Everybody’s On The Run’. 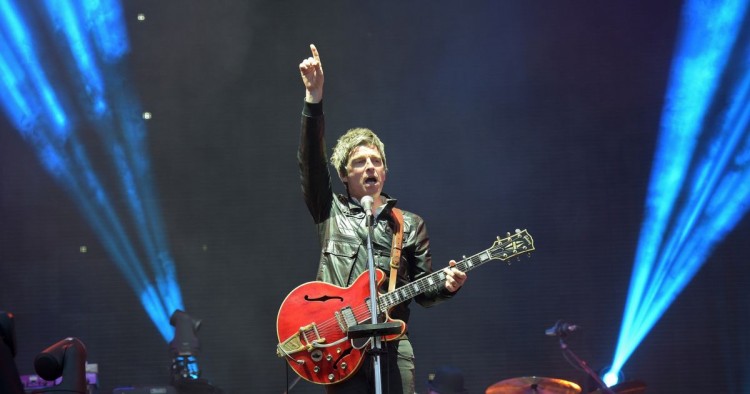 The crowning moment of the set however came from the live rendition of ‘If I Had A Gun’.  Putting the world at stand-still, Noel managed to collate TITP into one voice and send chills of pure ecstasy coursing down spines.  There isn’t many frontmen of a ‘newly created’ band who can control emotions like Noel Gallagher can, and, for that alone, his headline set at T In The Park should be universally applauded and forever in the back of minds.

One crazy weekend filled with love, laughter, mud and not to forget some world-class music.  Until next year TITP, we’ll be missing you.