Having already seen the band briefly at This Feeling’s Queen of Hoxton gig in March, and sampled clips from their debut album Pavilion, on the 2nd April 2014 I dropped everything to see them perform alongside Rouge and The Franklys in Camden.

The night was introduced with a bold opening by Rouge, who worked through a surprisingly powerful set, even covering Leadbelly’s (recognised for the Nirvana cover) ‘Where Did You Sleep Last Night’. Despite a critical reception from some, stating that the sound was “too clean” for the song choice, the band was met with positivity as the crowd gradually converged around the stage to approvingly bob along. 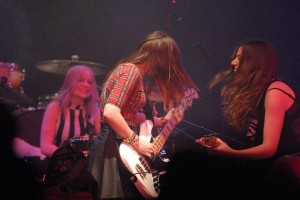 There’s definitely something about gutsy female bands that seems to be making a comeback, or even marking its territory. “Genre” discrepancies aside, the likes of Wolf Alice and Deap Vally work because of the antithesis between the feminine sound and the more typically masculine aggression in either vocals or instrumentals. Feminists did it well with the Riot Grrrl genre of the 90’s, and now, evolved, that fundamental formula for good female-fronted music is back to, with any luck, stay.

Time passes quickly, and after a brief conversation about chicken, a new EP and a dog called Nigel, the Mono Polys take the stage, opening with the acclaimed ‘Ancient History’ and working through a setlist of exciting sounds, some familiar and some more novel to my keen, vastly judgemental ears. Polite with a hint of self-deprecation at points, the band come across as charismatic both on stage and in person, all members expressing their own individual styles in their performance, not seeming false or overdone at any point.

There’s a definite air of modesty in The Mono Polys, which is something I like in a band. Seemingly unaware (exteriorly, at least) of their accomplishments and how interesting they are as atypical students, there was not even a hint of an outward façade or any sort of arrogance, but perhaps an awareness of potential room for improvement, future aspirations and a sort-of untouched hedonism about the whole experience as if being 17 with an album out and having the ability to just pick something stringed up and play it is just totally normal and mundane.

Being the only male-fronted band there, The Mono Polys naturally stood out as something different with their versatility; individual personalities which somehow harmonised as an act and charged lyrics. Evidently highly-educated in what it is that they’re doing, the band came across as competent the whole way through, demonstrating that they don’t require a huge amount of post-recording editing to create the sound that’s been received so well, which makes a change from the oft well-recorded, struggling performances that can well be the case in even multi award-winning artists. 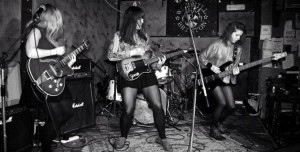 The night draws to a close with a final incendiary push as the, again, gritty and aggressive all-girl atmosphere returns to the scene under the label of ‘post-punk-rock’, and, sounding like something that would have fitted in on Misfits, The Franklys attracted photographers, writers and people who looked like they probably knew what they were talking about who reappeared with a glisten of profitability in their eyes.

Three hours later, and, in a different part of the country surrounded by different people with a different set of priorities to probably start focusing on, I’m still thinking about all three bands, which, surely, as with anything, is a key determiner in predicting what happens next…

The Mono Polys’ new EP ‘Blossom’ is available on iTunes.