“I don’t get what the hype’s all about” mutters my friend as we are making our way to Hyde Park for her first ever Arcade Fire show. Indeed, if one’s sole knowledge of the Montreal indie act consists of listening at home to their too alike-sounding and not terribly exciting records, they may wonder what is it that makes this band loved by millions, having achieved a cult status that has made their Reflektor tour a roaring success. And what a tour it has been: after headlining Coachella and Glastonbury, their first outing in Hyde Park in 3 years seems like no big thing for the Canadians. There is a reason behind all this, as my friend is about to find out. 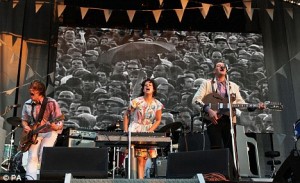 As we approach the venue, there is blistering sunshine which lifts the spirits and warms the crowd up. Fortunately so, as the supporting acts do not handle the task well: we are presented with some rather amusing growling coupled with raunchy movements by Future Islands’ Samuel Herring, followed by a sleep-inducing performance by Wild Beasts and a hopeful string of lively country songs by Jake Bugg which is quickly drowned in a seemingly unending series of his second-album mushy love ballads. Then again, do Arcade Fire even need support? Surely a band that has produced a tour of such mammoth proportions can do all the crowd warming-up themselves. Most of their fans seem to think likewise, as just prior to their appearance the audience triples and the park buzzes with excitement.

The show begins with a dose of Arcade Fire-styled banter, as their ‘fake’ giant-headed papier-maché versions strum a few introductory chords on the mirror-lit stage. Win Butler promptly ushers them off stage: “Guys, this is a big gig!” This comes across as a message to the gathered crowd, reassuring us that even on their last European Reflektor show they are here to deliver nothing but their best. Then the real gig opens up with ‘Normal People’, breaking their show routine which has been featuring Reflektor at the start of most of their latest gigs. This works just as well as an instant crowd pick-up, getting everyone from their relaxed state to mad prancing in no time. Crowd favourite ‘Rebellion (Lies)’ and ‘Joan of Arc’ keep the pace up, the latter seeing Régine Chassagne on a pedestal with a cloak and a glittery eye mask. After ‘Rococo’, Win takes a short pause to say a heartfelt thank you to the crowd, the first of many that evening.

Some classics from previous albums ‘The Suburbs’ and ‘Funeral’ follow, in between of which Win pauses again to talk about a non-profit organisation deeply supported by the band – Partners in Health, under the cheering of the crowd. By then the 60,000 people in the park are fully under the band’s spell, willing to submit to any whim of theirs and responding equally favourable to both fast and slow-paced songs. There is magic in the air tonight radiating from the ten musicians on stage: their drive is so infectious that they manage to fill even ropy songs like ‘Crown of Love’ with a buzz, while fast energy-pumping numbers send everyone into absolute joy.

Thus we come to ‘We Exist’, with the screen in the background showing the collective male dance scene from the video for the single,topped with giant projections of male dancers in flashy drag costumes and blond wigs. After a momentary confusion, the front portion of the audience turn around to note the existence of a second smaller stage some 200 metres opposite the the main one, on which the dancers are perched. Later, during the performance of ‘Reflektor’, this becomes the stage for the mirror-suited mascot that has been part of all of the band’s latest shows, while Régine with a mirror in each hand illuminates us from the main stage.

And then comes the undeniable high point of the show. It’s ‘Never Over (Hey Orpheus)’ starts with all members on stage, until Régine disappears only to reappear on the b-stage in the blink of an eye for a dazzling dance macabre with 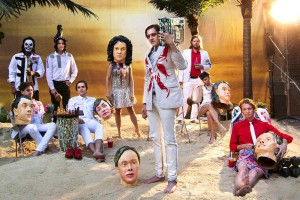 a skeleton-costumed man, with the setting sun in the background. The chorus comes timed for the settling of the dusk, with Win and Régine with her skeleton companion overlapping their voices in perfect harmony from across the field as they do a spectacular recreation of the distant longing of the two spouses separated, from the eponymous myth of Orpheus and Eurydice. For a short moment that seems eternal, one can feel the raw emotion between the real-life couple as Win takes his guitar off chanting ‘It’s never over’ almost acapella to Régine, answering to him from beyond hundreds of people. Before the crowd can wake up from the trance, the song does come to an end and Régine retakes her place in the centre of the stage for an abrupt change of mood with a joyous rendition of ‘Sprawl II (Mountains Beyond Mountains)’, before the band takes a short break.

As every regular on their shows knows, the gig is far from over. The Bobbleheads, this time featuring a papier-maché head of the Pope, reappear onstage, quickly joined by the actual band for a cover of The Rolling Stones’ ‘Sympathy for the Devil’ and Arcade Fire’s own ‘Here Comes the Night Time’, the latter of which is turned into a carnival-like celebration by hurling a shower of golden confetti at the exultant audience. ‘Neighbourhood #3 (Power Out)’ and ‘Wake Up’ provide a triumphant wrap up of the show, and Win spends his last minutes onstage capturing the moment with a handheld camera.

There is no doubt that Arcade Fire put their heart and soul into every performance, and while their records lack vitality, onstage they make each song shine with its own light. If one thing is to be taken from the show, it is that they are a band that needs to be experienced live, if only for the fleeting moment of invincibility felt in the air as hundreds of strangers were chanting as one the wordless chorus of ‘Wake Up’ in the emptying park.

View all posts by Mariana Nikolova →