On the back of releasing his stunning book While We Were Getting High: Britpop and the 90s; Celebrated photographer Kevin Cummins is now ready unleash a 4 CD package containing 71 tracks and a 2LP vinyl set entitled Caught Beneath The Landslide offering 26 tracks released via Demon Music Group.

With a release date of 14th May of the 4 CD set out on 30th April and the 2 LP version out on 14th May, this set draws on some of the most iconinc and revered artists of the period, featuring many hard to find and rare tracks. Giglsutz took the time to sit down with Kevin to bend his ear on the release plus what he thinks the chances of Manchester City winning the Champions League are:

Hi Kevin, I’ve been an admirer of your work from your time working with the weekly music papers back in the early 90’s, I was a weekly purchaser. You’ve now released an album featuring many artists that you photographed for the fabulous book While We Were Getting High: Britpop and the ’90. Why did you want to release a CD?

I thought it’d be a nice idea to have a soundtrack for the book. When I’m editing a book I always listen to a pertinent selection of music. Fortunately Demon thought it’d be good too.

How did the set list for the CD come about?

A combination of stuff I liked and stuff that wasn’t massively obvious. We also tried to get rare versions of the better known tracks to give everyone value for money. Then it was a case of getting the license for all the tracks. Fortunately I had an excellent person – Michael Mulligan – doing all the hard work and negotiating deals.

How did you get the likes of Steve Lamacq, Johnny Dean (Menswear), Math Priest (Dodgy), Kevin Miles and Matt James (Gene) and Jaime Harding (Marion) to contribute to the box set?

By asking – simple as that.

The early 90’s was an exciting time for new bands coming through like Manic Street Preachers, Suede and seeing the re-emergence of Paul Weller. Do you have any interesting stories being in and around the bands of this time?

Interesting stories: Paul Weller in Belfast for the first time. The Manics in Bangkok, Suede in San Francisco, Blur in Japan and Los Angeles … er no, nothing much happened 🙂

There a couple of bands from the early 90’s, notably World Of Twist, Flowered Up and Whiteout, that aren’t included. Did you miss the chance to photograph these bands?

I actually photographed Flowered Up. Sometimes there was a licensing issue, sometimes it was a matter of space. Ask 5000 people to compile a play list and there wouldn’t be two the same. 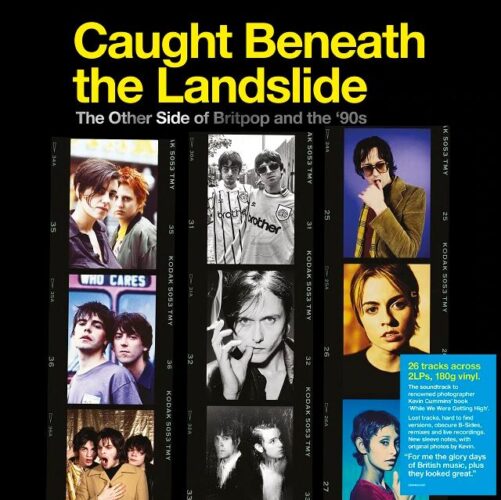 Were there any bands that you’d have liked to be included but couldn’t include?

No. I’m really happy with how it worked out.

When you photographed artists you often used bold colours as a background image. Was this on purpose?

Well I didn’t very often. Sometimes it was because we needed plain backgrounds for NME or Vox covers.

Who influenced you to photograph in this style?

Nobody. It was purely out of necessity.

How has lockdown and the regulations around COVID been for you in 2020 and the start of 2021?

It’s made photographing people a bit awkward, fortunately I have an excellent telephoto zoom lens. Hopefully we’re over the worst of it now.

Do you have any projects in the pipeline for the forthcoming future?

I have a Joy Division book coming out with Cassell / Octopus this October. The perfect Christmas present.

Are Man City going to win the European Cup this season?

It’s looking good isn’t it – but you never know in a one off game. We look determined to win it though.

Caught Beneath The Landslide can be ordered here

WATCH: Jake Bugg is out of this world in video for new Steve Mac produced single ‘Lost’