I didn’t check the set list, I avoided the deluge of reviews from the opening nights, I stuck my fingers in my ears and shouted down anything that sounded even remotely like it might be about to become a spoiler, no matter how well-meaning and innocently chatty. There were a lot of conversations, between the start of Kate Bush‘s run at Hammersmith and the date printed on my ticket (and I did have a ticket, not a press freebie, I might add), that played out a bit like this: 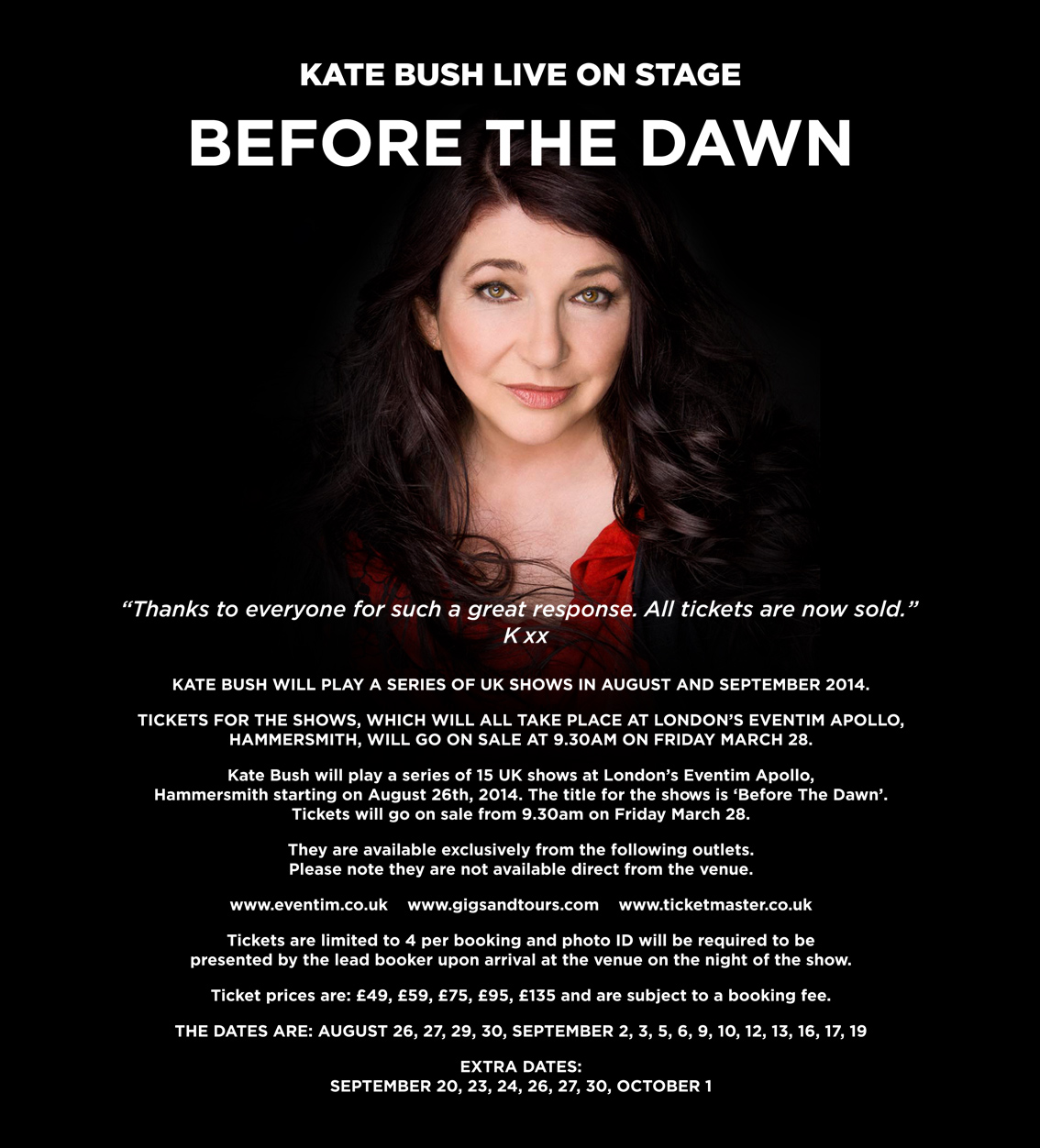 Other person: “Wow, it’s meant to be quite the spectacle; apparently there’s a-“

“Have you seen the set list on Spotify? You must be looking forward to-“

“Did you hear she ends the show with-“

So, for anyone who is still attempting to stay blissfully ignorant as to the content of Bush’s Before The Dawn comeback outing, with a week left to go, rest assured that you will find no specifics here.

Maybe my uncharacteristic commitment to delayed gratification had something to do with the fact that this had been such a very long time coming. Having been but a twinkle in my parents’ eyes when Kate Bush last toured, I can’t claim to have been waiting for 35 years, but it is still a good couple of decades since I first heard that magical voice (via the inclusion of ‘Babooshka’ on a TV-advertised cassette compilation called Woman To Woman which I received for my ninth birthday). A few more weeks, with a ticket in my pocket, were a sort of perverse treat. It paid off on the night, as the beauty of the intimately familiar was thrown into sharp relief by the utterly new, each creeping moment of suspense and every sudden reveal all the more gratifying for my carefully preserved naiveté.

During the seemingly interminable, solitary train journey up to London, I had felt almost nervous; not for fear that Kate Bush would let me down, more the opposite: I was happy to be a leaf on her breeze, sure it would take me somewhere worth going… but where? It occurred to me that I recognised this mood, much as I hadn’t felt it for a while; it was that peculiar state of hazy alert that precedes a coming-of age moment, like getting your A-level results or finally ending up in bed with the object of a long-harboured crush. I know – so far, so ‘fangirl’ – right? But, such is the strange power wielded by this enigmatic artist, that I say all this as someone who would not even qualify as a Kate Bush super-fan – I may be in awe of her talent, revere her as a pioneering woman in the music industry and love many of her songs, but I don’t know all her work inside-out and I’ve never dressed up as her and danced around a park for a video

Kate Bush is such an idol to so many that the 22 nights of this run sold out in 15 minutes. She could have just walked on and sung her hits against a black backdrop, and people would have been fighting back tears of euphoria. But who bothers to come out of retirement after 35 years as a relative recluse to churn out a bog-standard show? Certainly not one of the most inventive and influential musicians and performance artists the pop world has ever seen. Some people had cynically speculated that she was just doing this for money, but that never sounded credible for a moment, and – without reneging on my ‘no spoilers’ pledge – I can safely say that the sumptuous extravaganza with which she makes her comeback is about as far from being a tawdry cash cow as it is possible to imagine.

That Bush’s glorious songs have stood the test of time, protected from fashion by being so very singular in the first place, has never been in question; she has now proven beyond any doubt that her voice is just as timeless and ageless a phenomenon – rich, elastic and gleaming with life’s many colours. Her energy, physical grace and storytelling spirit, too, remain righteously undimmed, as she whisks her elated fans off on a scenic tour of her heart and mind, supported by a flawless cast of musicians and performers which includes her now-grown-up son, Bertie.

Moving, startling, eccentric, elaborate in its staging yet stark in its emotional impact, and dusted with warm humour, Before The Dawn is one of a very small handful of shows that I have seen – of any genre or art form – during which I have felt stabs of genuine sadness that everyone I love is not able to see it too. Not just that they are not there, with me, to share the ride in real time and pull gleeful ‘WTF?!’ faces, but that they may not ever get the chance to experience it at all, for themselves.

While there were a couple of slight dips in my attention during the latter part of the show, these were tiny drops in a vast ocean and in no way detract from the fact that Before The Dawn is a mighty achievement from a rare visionary. For the majority of the three hours’ running time I was literally perching on the edge of my seat; parts of the show grabbed me on a fundamental level and refuse to let go. Kate Bush is arguably of a stature that allows her to do as she pleases, and she has gone to extraordinary lengths in order to give something great to the world.

The title of this production (from which Bush’s own name is absent, throwing the spotlight more fully onto her creation) is a thematic thread snaking through a mysterious hinterland. There is a sense that it all could have been a vivid, early-hours dream, of the sort that feels so lucid – so intense and hyper-real it might be in 4D and Technicolour – that waking up suddenly in your drab normal room to greet the drab normal world, after the dawn, seems something of an unfair practical joke. Except that it wasn’t a dream, and Kate Bush really has come back to make our waking world that little bit less drab and normal. Thank god.