Hyde Park last night was graced by The Libertines as they continued their second reunion together. Following on from their two intimate warm up shows in Glasgow last weekend they performed in front of 60,000 at Hyde Park and boy they smashed it… 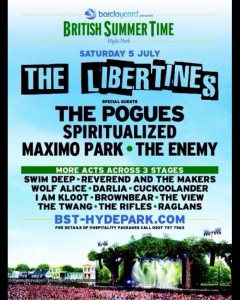 Having been lingering around from 2pm, watching thousands of people splash the cash on £5 pints and £20 bottles of wine (I hate to think what it cost in the Champagne tent), I managed to catch Coventry favourites The Enemy before making my way over to see The Rifles. Or at least I tried. Unfortunately if you weren’t standing within 5ft of the pathetically placed stage you were unable to hear a single note played… Who organised that? Following on from the stage closures for Graham Coxon and Swimm Deep there appears to have been some rather poor planning and organsiation from BST. 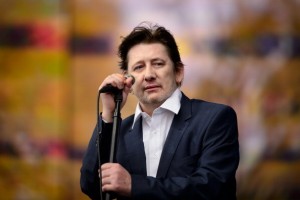 Having reluctantly given up on The Rifles I sourced a nice spot towards towards the back – dead centre of the main stage and took in main support act The Pogues. As expected they gave a lively performance. The Pogues are a top band although I feel the majority of the crowd around me assumed they were on the bill as some sort of ironic act as they all burt into a ridiculous Irish barn dance – it was a sight to behold (for all the wrong reasons).

Pete Doherty, Gary Powell, Carl Barat and John Hassall walked on stage to a rapturous reception of cheers and screams with pints being thrown and flares being set off everywhere. And it didn’t take long for thing to turn a little sour with forced stoppages during ‘Boys In The Band’ and ‘Time For Hero’s’. This was due to crowd surges which had prompted security to walk on stage to stop the show. This seemingly left the band pissed off as drummer Gary Powell came to the front of the stage and said: “We love you guys but you have to move back” although Pete took things in better spirits as he serenaded the crowd as they were moving back with a version of ‘Build Me Up Buttercup’.

With crowd issues put to one side The Libertines produced a mesmerising 24 song set. Starting with ‘Vertigo’ they included all the favourites such as ‘Music When The Lights Go Out’, ‘What Katie Did’, ‘Don’t Look Back into The Sun’, ‘What A Waster’ and ended on, ‘I Get Along’. As the penultimate song for the night they also included Babyshambles tune ‘Albion’, which was greeted with a huge cheer as the pair (Pete and Carl), sang into the same mic together. Nice touch…

Before they went off stage Pete and Carl paid tribute to all the war heroes by reciting Siegfried Sassoon’s 1918 poem, Suicide In The Trenches. word for word to end the exquisite show. They read: “We remember and honour those who gave their lives for liberty. We thought it was nerve-wracking coming out here tonight but leaving Kings Cross station with a rifle across your back in 1914 must have been really hard.”

It was lively, it was emotional, and was jammed packed full of Libertines goodness. We have been served up too many straight down the line beige bands in recent times and the likes of The Libertines have been sorely missed. They Libertines are back and thank fuck they are…