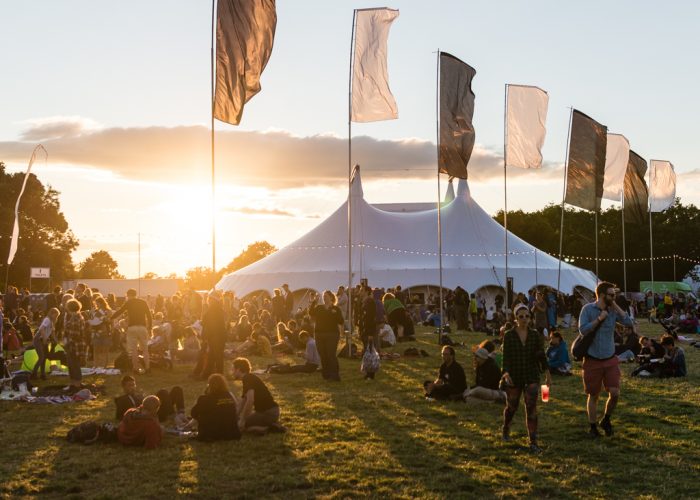 Steeped in history and set to host some of the leading lights in both science and music, Gigslutz set off on a field trip to Jodrell Bank Observatory, home of both the iconic 250-ft Lovell Telescope and this year’s inaugural Bluedot Festival. To boldly go where no man has gone… ahh actually, no there was really quite a few in attendance. What follows is an account of our findings.

The Bands Who Fell To Earth

It’s unclear from what part of the cosmos they descended but here are a couple of unexpected outfits we’re extremely glad we caught. Friday night saw Manchester’s hybrid raveling collective Space Cassette overrun the Nebula Stage. With their intergalactic GOAT-esque get-ups, Age Of Glass set out to liberate onlookers with their specialist blend of Prog/Electro/Punk mish-mash.

Henge then arrive with their mushroom-adorned backing dancers to transmit their eschewed Sun Ra influenced space dub over the heads of the thriving hive mind of the Nebula Stage. Then the chorus of the anthemic ‘Weapons of War’ picks up and is chanted against a rallying backbeat until it is seared into the audience’s collective consciousness forever:

That the weapons of war,

Are manufactured no more.

That we have in its place,

The means to unite and colonize space!” 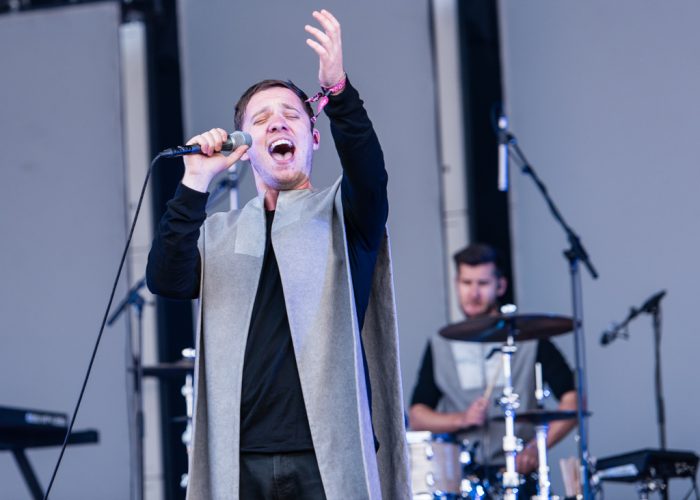 Imagine (in all it’s caricatured, cartoon fancy) a scientist wildly pouring luminous test tubes into a foaming beaker as the crowd bursts into a frenzy. That staggering, glass-shattering eruption of light and sound is captured by Everything Everything. Jonathan Higgs’ rapid fire, snarl-to-falsetto vocal delivery weaves its way in-between inventive arpeggiated guitar work and spasmodic synth patches. They are profoundly odd and utterly inimitable.

Reads George Bernard Shaw’s quote during Prof. David Nutt’s lecture on Psychedelics. It’s an elucidating moment in what is an inspiring talk, strongly tying in with Bluedot being billed as a ‘mind-blowing, festival of discovery’. Exploring both outer and inner space, as Bill Hicks would say. The breadth of lectures taking place over the weekend is one of the most distinguishable aspects of Bluedot, which lends its name from astronomer Carl Sagan’s ‘pale blue dot’ speech. This well carried out combination of science, technology and music does not fail to disappoint. Towards the end of Nutt’s lecture, the audience breaks out into scores of applause as he compares the Psychoactive Substances Bill to the Catholic Church banning telescopes for 150 years, which seems especially poignant considering the location. Unfortunately we do miss dance-pop physicist, Brian Cox’s ‘Infinite Monkey Cage’ live special with Charlotte Church, Robin Ince and Jodrell Bank’s Tim O’Brien early Friday evening, however we more than make up for that over the course of the weekend. 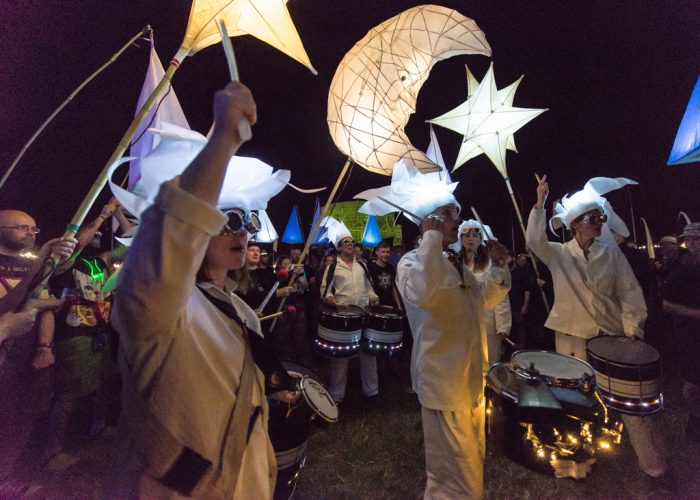 We run into Joy Division/New Order’s Stephen Morris waxing lyrical about the band’s halcyon Hacienda days (or getting fleeced by Tony Wilson… there’s no hard feelings) and his curious hobby of collecting and restoring – and subsequently injuring himself in/and on – tanks… apologies, ‘classic military vehicles’. We then catch snippets of talks on trans-humanism and the corruptive bias of mass media. As well as Dr Catherine Loveday’s lecture on the ‘reminiscent bump’ and the neurological reasoning behind why we respond positively, or not, to music (as the warbling Whitney Houston clip deftly proves). We’ve been fortunate enough to provide our own case study below, carefully adhering to the scientific method so befitting of Bluedot… All right, maybe not so much – but we gave it our best damn shot.

Sunday afternoon may see us at our lowest ebb, however the Oxytocin is a-flowin’ by the time folk-trio-turned-psych-pop-stalwarts, Stealing Sheep finish their standout set. Like Gwenno lost in a hall of mirrors, the giddy Krautrock influenced material lifted from sophomore LP Not Real feels re-imagined specifically for the dance floor. There’s stressed focus on the advanced vocal harmonies and the resounding Disco backbeat; as if Abba after being projected into space, had broken out of their cryogenic stupor and revamped both the space shuttles’ hardware and their distinctive sound. 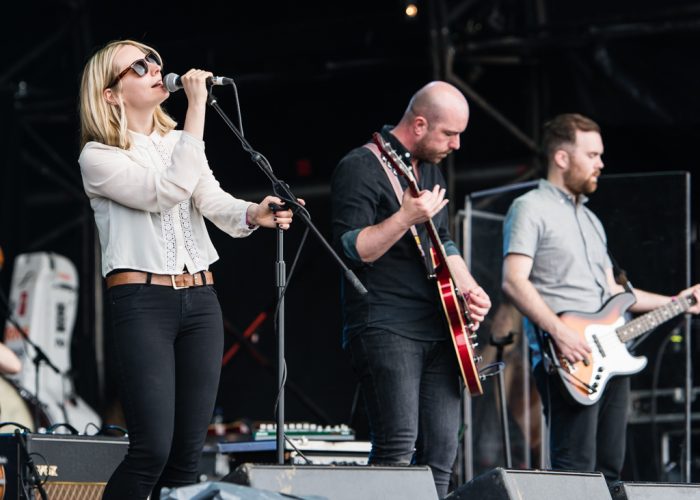 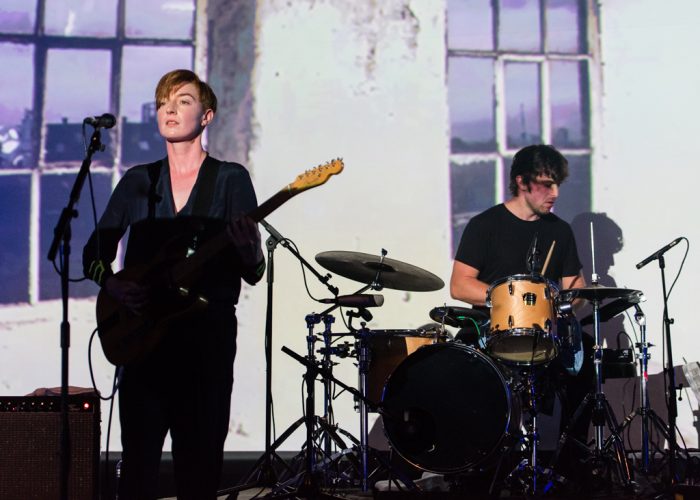 Another notably uplifting performance comes courtesy of Lanterns on the Lake, accompanied by the grand Royal Northern Sinfonia. Recalling the sweeping cinematic sound palette of Sigur Ros’ Með suð í eyrum við spilum endalaust, their slot drifts along with a subtle sense of understated beauty. Elsewhere, against a stark barbed wire backdrop, Lonelady captures the industrial claustrophobia of post-punk and ingeniously pairs it with driving funk grooves. Both ‘Groove It Out’ and ‘Hinterland’ go to blow-to-blows with Caribou’s Sun, Air’s ‘L’femme d’argent’ and Underworld’s ‘Born Slippy’ for biggest electro-anthems of the weekend in this reviewer’s humbled, hyped-up opinion. 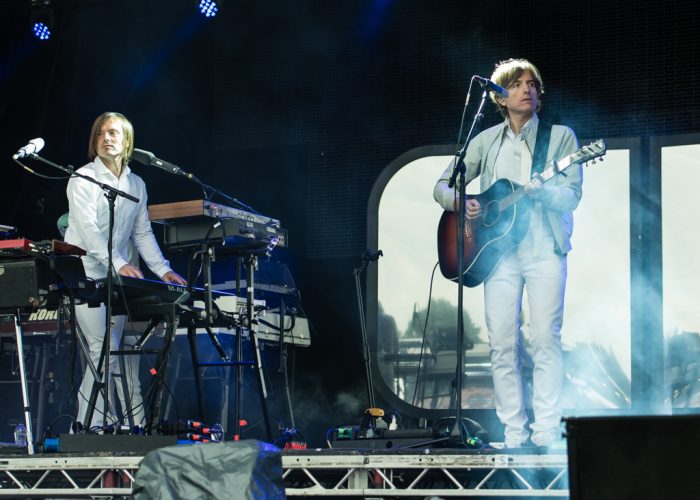 A downtempo divide in proceedings does it for some as Franco-disco duo Air draw on eagerly-anticipated Moon Safari cuts for a restrained set that sends some into eyes-clenched euphoria and others, sadly just to the bar. 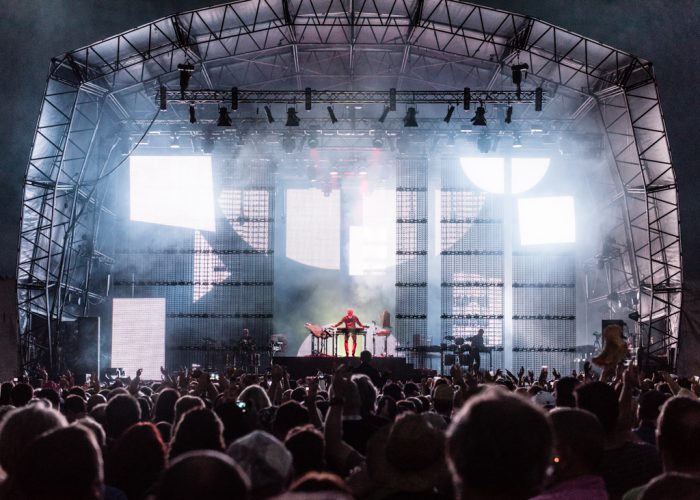 Bringing the Lovell Stage on Saturday night to an almighty close was Jean-Michel Jarre pioneer of the laser harp and electronic music extraordinaire. The amassed Oxegène t-shirt-wearing crowd anticipated one of the most intense lightshows of the festival and they certainly were not disappointed. Known for his compulsive collaborations, tonight he stands alone fervently pitched over his stacked synthesizers and sets lasers to stun (soon, soon the space references shall be over). No stranger to playing to the masses, he carefully cherry picks from his extensive back catalogue, with the intergalactic swoon of Stardust and Oxegène, part 4, wowing onlookers. Mid-way through his set, he presents his cultural relevance as he casually reflects on his recent travels to Moscow to collaborate with Edward Snowdon on the song ‘Exit’. What follows is a creative unification of provoking Snowden imagery alongside his trademark brand of nerve-tickling electro. 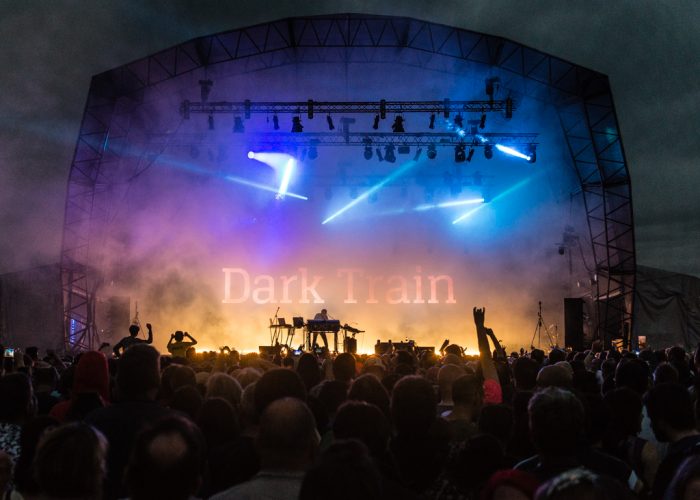 Cast in a spectral red light appearing like some demonic sprite, Underworld’s Karl Hyde put Friday night’s audience through their paces, as rain pours down during the middling mid-tempo ‘I Rah’. Exhausted devotees then receive the perfect opportunity to dance themselves clean during an encore of the decade defining ‘Born Slippy’. 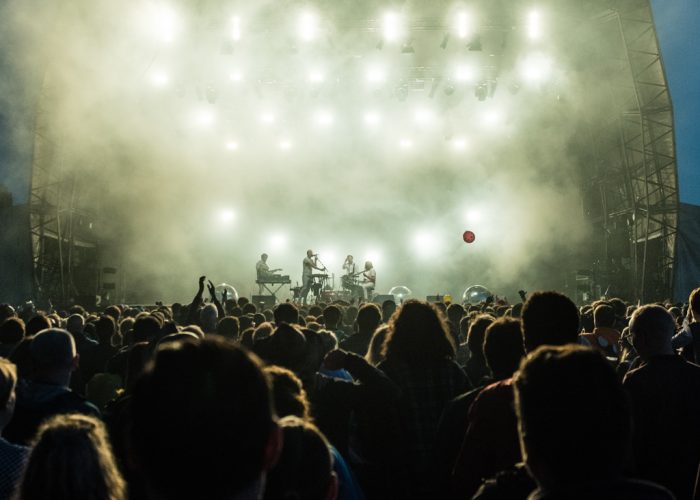 If there’s one live act that you can be assured will live up to their name it’s Dan Snaith’s Caribou. In a set that seems to absolutely fly by, the four-piece appear on the top of their game as they power through cerebral classics like ‘Odessa’ and the rapturous refrain of encore number ‘Sun’, interspersed by fine ’60s psych-bop Our Love selections. During ‘Mars’, the red planet can actually be spotted overhead. Admittedly we couldn’t have told you that at that time. But there’s certain folks cutting loose that could have, and well, that’s pretty cool Bluedot. 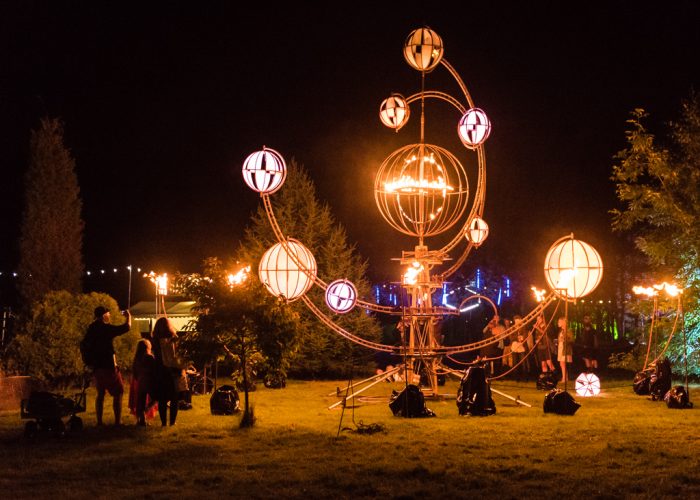 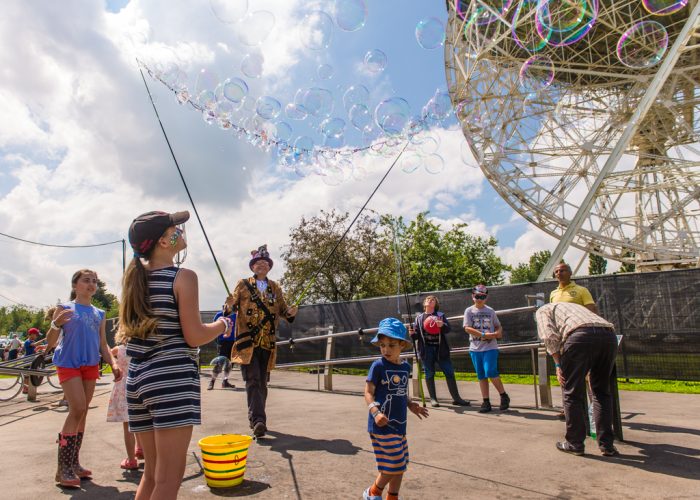 A couple of (unnamed) online publications had a pop, questioning Bluedot’s status as a ‘family-friendly’ event, but from this reviewer’s perspective, a kid in a multi-coloured Caribou t-shirt jiving along on their dad’s shoulders, that’s pretty welcoming and it neatly sums up this fledgling festival. Sure, you overhear friends enthusing about the love they’ve just received on a certain Instagram post but you also catch them excitedly chatting about the great talk they caught earlier on gravitational waves. Sometimes a Clanger accuses you of being a hipster. It’s fine. (Also, blue dungarees, Clangers? The ’90s revival-chic look isn’t fooling anyone.)

With an expertly curated line-up, stellar installations (such as the Luminarium and Brian Eno’s ever-evolving ‘visual music’ cast onto the Lovell telescope) AND a diverse crowd, of performers, thinkers and drinkers, it succeeds in celebrating human ingenuity. Space, my friends, is most definitely the Place.