Having followed The Shakes over the last year, I was lucky enough to catch them at The Brewery Quarter in Cheltenham recently and my word, I wasn’t disappointed. A warm-up bill for the fantastic Lakefest, the band are due to appear on the Main Stage on the Saturday afternoon at the festival – same day as a certain Manic Street Preachers.

After a successful day of warding off the elements, as luck would have it, the rain started to fall just as The Shakes were about to begin their headline slot. This appeared to jog the band’s hand as their set began 5 minutes early, possibly sensing that they might be about to lose a large section of potential new converts. Within minutes, the first menacing chops of Watch It are ringing out across the square from Joei’s Rickenbacker, slowly speeding up into a frenetic pace as Zak joins in on Tambourine and the band explodes into life. This is their set opener at every show and generally tends to work as an instant answer to those that recognise their obvious self-confidence and respond with the question; “Can they back it up?”. 30 seconds later the answer is a delightful yes. Its such a simple song but is an instant classic in the vein of Every Fallen In Love or Fell In Love With A Girl. Ironically, the hook line of the song asks the audience “Are you going out or are you staying in?”.  Although it’s fair to say that the actual subject matter of the song would appear to be in sightly less jovial terms.. 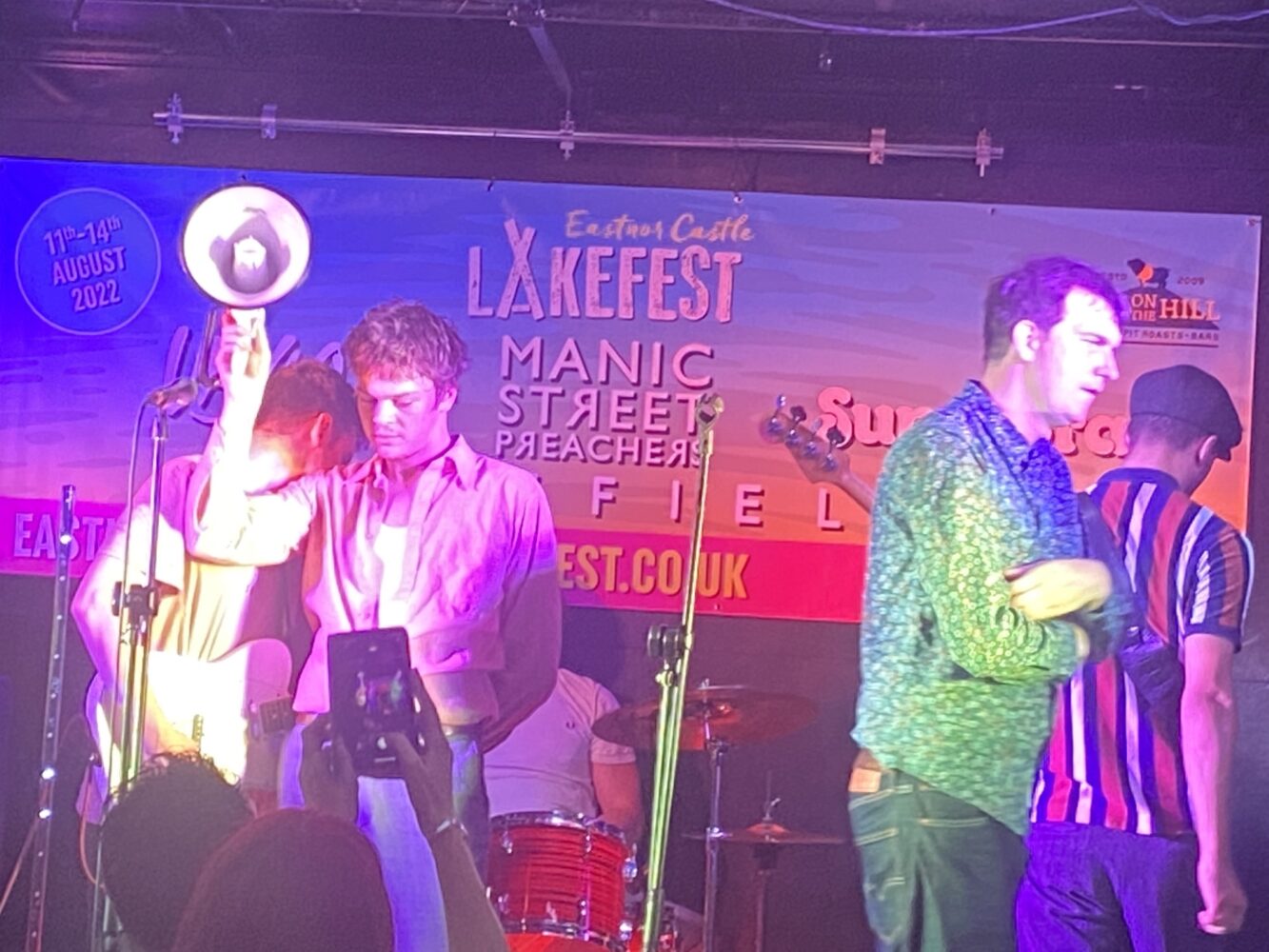 Next up is Welcome To The Show. This is a Northern Soul-esque stomper about a night on the town and is reminiscent of prime Dexys Midnight Runners. More and more people edge towards the front of the stage as their Roadie – a Johnny Vegas double – does a valiant job of keeping the rain off their pedal boards. Next, the band launch straight into Empires Fallen – a song about the Establishment which includes memorable lines like “A glass ceiling above our heads and forever closing walls”, “Do you know what it feels like to have nothing taken away from you?” and lyrics about the removal of Statues that are no longer seen as worthy of admiration in “Edward Colston’s in the Sea, Margaret Thatcher’s soon to be”. This is a band who aren’t shy to show that they have a keen interest in Politics and are not afraid to tell the local crowd what they think of their elected representatives.

Lost Along The Way is next up and you can hear echoes of The Specials in this ode to smoking far too much Mary Joanna. Followed by Holloway In The Sun, a song about youthful exuberance on a trip to Benidorm and renamed as Holloway as a nod to Joei’s local manor. Its prime Parklife-era Blur and brings to mind their punk banger Bank Holiday from that album. The band later revealed to me that this track had previously been mooted as their debut single. Maybe its the sound of Summer 2023? The Shakes look set to dictate those terms anyway… 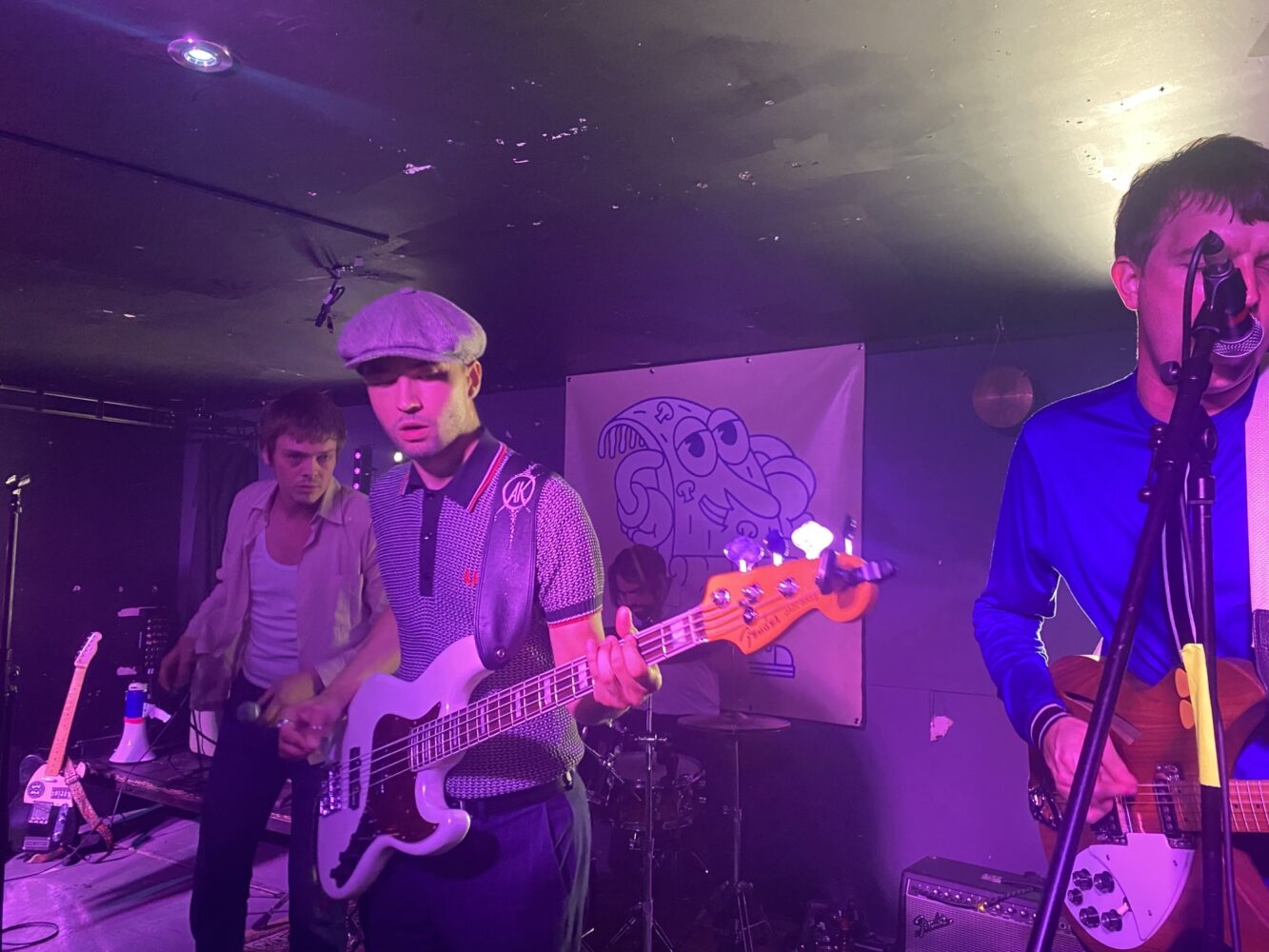 One thing I’m always taken aback by is the fact that Zak is actually not at all arrogant between songs and despite his stage presence comes across as quite a vulnerable individual. He dedicates I’m Your Man to a love long lost. This is a gorgeous ballad and a cry for forgiveness, decorated by Motown-style doo-wop backing vocals. You hope for Zak’s sake that the girl to whom he pours his heart out has forgiven him since. He seems like a decent bloke as was evident when I spoke to him after the show.

As we reach the midway point of the set, the crowd are already won over and they have no idea what’s about to hit them next. Take Me Away is destined to be a classic. It’s like the moment you heard the Oasis demo Columbia but if it was mixed with Mathar’s Indian Vibes. You picture Nimmo as Jagger in Performance as he stands blissed out and the band weave their psychdelic majesty all over the song. This is a huge tune. A huge tune.

Then without a moment’s rest, Oli starts tapping out the beat to Change Isn’t Strange. This is the moment. This is the Single. This is the one that will be played in bars and clubs for decades to come. The Kinks, The Strokes and the heart warming duet between Zak and Joei at the end straight from The Libertines’ Albion-period all in one tune. This is a band who have been influenced by so many and have applied their own magic to create a marvellous sound that is sure to appeal to the masses in the coming months. They aren’t bothered about your haircut or clothes, just that you appreciate the music for the music’s sake.

Fake Reality comes next. With its B52’s bass line, it instantly sounds like another potential single with  lyrics suggesting that someone has pissed the band off in a past life enough for them to document the quarrel in a tune. Someone somewhere has brought disgrace to their family name it would appear that The Shakes refuse to be indicted. 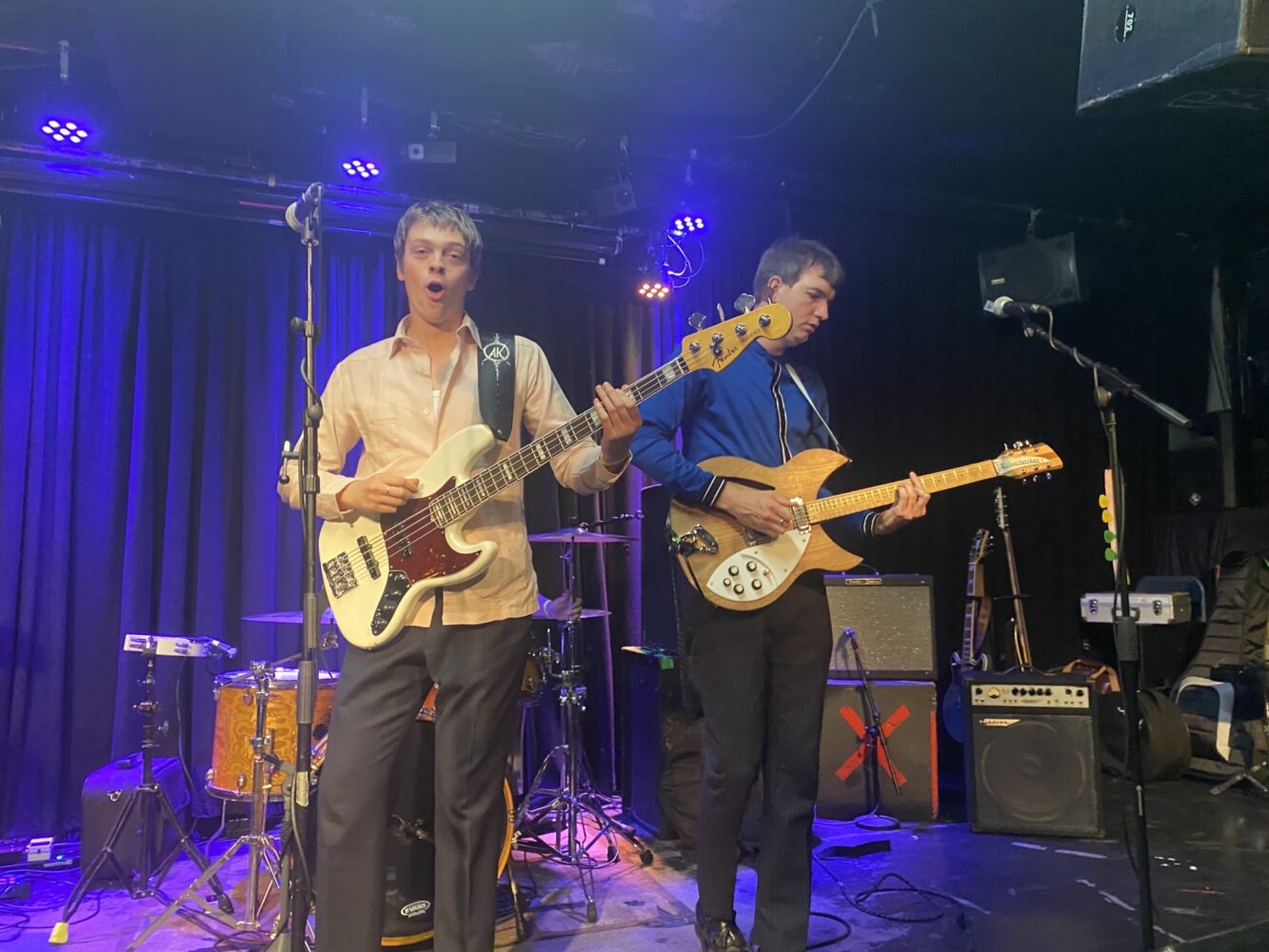 And now the tune people have been waiting for… Zak introduces Sorry Officer as their next single. In fact, this is actually the band’s debut single. I haven’t heard a track like this in years. So many parts all coming together in one glorious anthem about Police Brutality and never ever grassing on your mates. Has there ever been a more simple and straight to the point lyric as “I aint no rat and I won’t tell, aint got no price and I won’t sell”? This is the sound of Young Britain today. Nimmo later tells me that this tune will be getting a lot of attention when it’s released and he will only smirk when I ask him why. He knows something we don’t. He is aware of the trajectory in front of him and he seems fully prepared for it.

The band leave the stage to cries of ‘one more tune!’. The band duly return and Zak is again baring his sensitive side by declaring his lost love. The song is called Broken Rainbow and it’s the first time I’ve heard it. Wow. How can such a beautiful Phil Spectoresque ballad be turned into a seering anthem by a few chords on Joei’s guitar. This is their Live forever moment – of that I’m sure. We wonder if the girl in question found the Broken Rainbow that a passionate Nimmo sneers about. Ironically in the pouring rain.

Cheltenham is then treated to a second encore with Here Comes The Rat. I am told by a shocked manager that this is the first time this has happened. The song is dedicated to the 97 Souls who died at Hillsbourough and is an out and out attack on the so-called ‘news’ paper that shall not be named. One last final rallying call to the rebels and then its over. The band stand triumphantly onstage, grinning ear to ear, as they know they have converted many new followers to the cause. 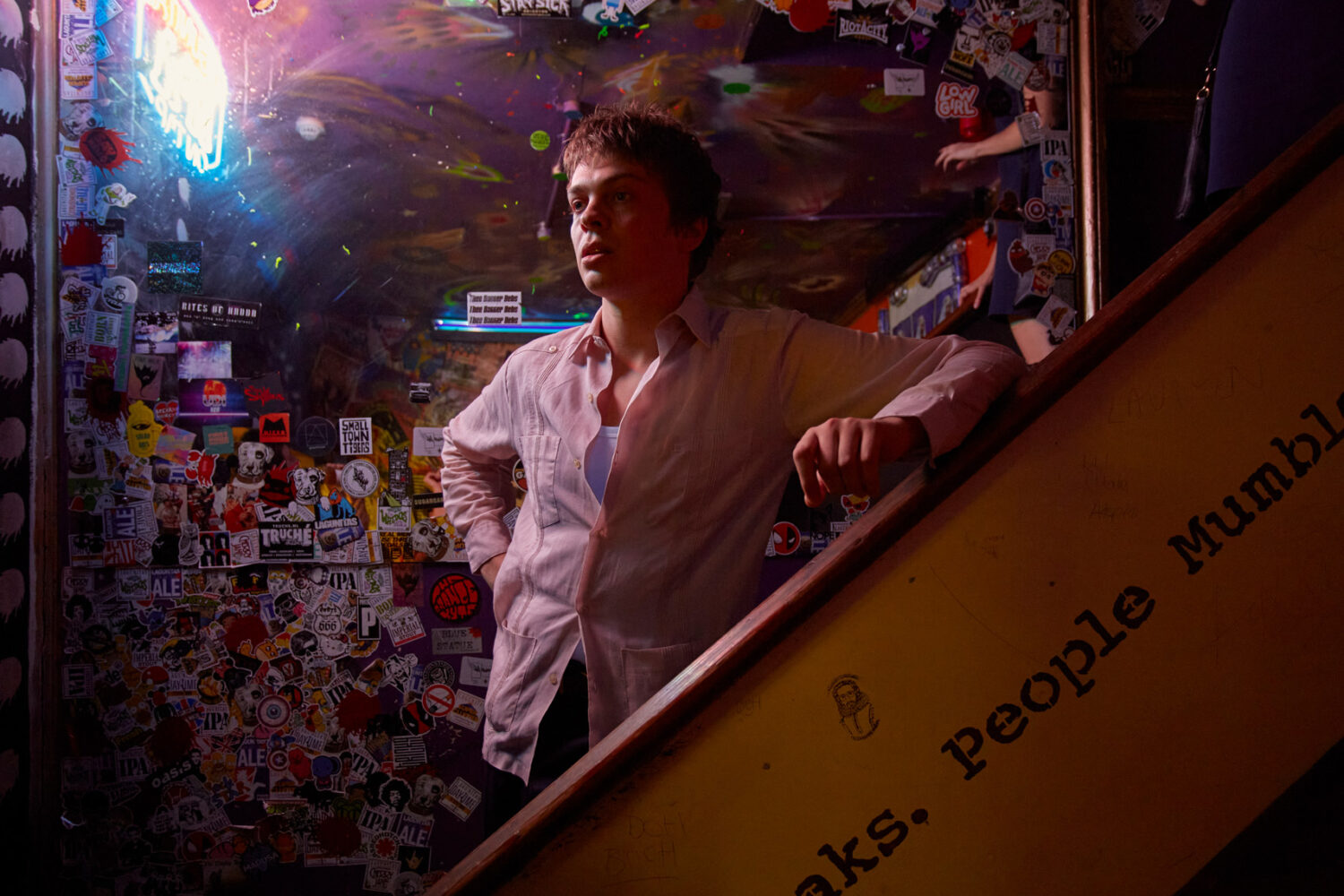 It is such a great gig and later that night, I have the pleasure of spending time in the bands company in a local club. That is a tale for another day but one thing that stands out to me as I meet them… Their majestic singer Zak Nimmo is perceived by most as the figurehead of the band but this doesn’t tell the full story of The Shakes. 5 brilliantly talented artists are on that stage. Joei prowls the stage like a man possessed, Sam throws out licks like a young Hendrix, Alex on bass personifies coolness, calmness and The Funk whilst Oli on drums is a beast hammering away like his life depends on it. They truly are a talented gang of souls. They have a mantra that they are coming for us one by one. I have fallen for them and I believe that anyone who catches their blistering live set will instantly be converted. You can’t help but to wish the best for them.

The question is… Are you aware?

This Feeling Track of the Day: The Utopiates ‘Best and Worst Days’

This Feeling Track of the Day: Venus Grrrls ‘Violet State Of Mind’