Expectations, expectations…. With stylish, well thought out design Festival No 6 promised a lot with a classy, mature, well put together roster of acts in the incredible coastal location of Portmeirion in Wales. 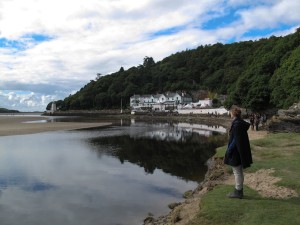 Walking through the village is a treat, a wonderful, eccentric vision of one man which was built over a 50 year span. The village took naturally to the spontaneous cast of strange entertainers that inhabited it over a September weekend. The fact the village shops were still open selling posh jam and the like gave a slight air of having a party with your parents at home but once you got down the hill and reached the disco at the stone boat or listened to a band by the swimming pool at the estuary stage it felt a treat to be able to take in some great music while enjoying the wide skies of the estuary. Portmeirion is a fantastical place to explore, its Italianate towers and pink and green villas, set against moody woodland, and opening out on an ever-changing expanse of sand and sea.

The Town Hall with its ornate cave-man plaster ceiling hosted films, talks and the more acoustic acts such as Jake Evans and Joe Duddel whose set on Sunday filled the hall. Also in the Town Hall, Phillipa Perry’s talk on self-identity was an interesting eye opener, involving some self descriptive soul searching which provided an interesting twist on festival interaction. Her charm and humour warmed many to stay for Salon No6’s talks on sexual biology by Grace Dugdale and then DJ Greg Wilson talking about the second summer of love and acid house. 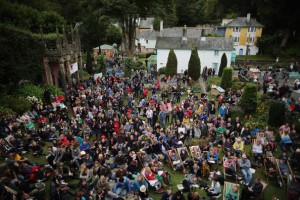 The main arena was where pretty much everything else happened with 3 stages, comedy stage and dj areas. Everything Everything delighted an up for it crowd with their unique vocal style from lead singer Jonathon Manning. Postman Pat was loving it. Turns out the Postman Pat on a fishing rod was manned by Manning senior which lead to a lovely story about cuddly toy re-incarnation.

James Blake was well received set in the main. The dance orientated set however ended on one of the slower moodier numbers which left people a little disappointed.

London Grammar opening the main stage on Saturday was a highlight of the entire festival. As lead singer Hannah Reid explained in obviously completely natural glee the tent went from 20 people to capacity before they’d even finished the first song. The reason? A massive buzz around this band? Or the facts – that voice, its range, the use of its soaring power bursting through against the sparse instrumentation, it makes for an emotional, spine tingling, intimate experience. A few men may have admitted to being on the verge of tears during tunes like ‘Metal and Dust’. The cover of Chris Isaac’s Wicked Games was beautiful whilst Hannah excitedly announced that this was the biggest main stage crowd that they’d ever played for. They’re clearly only going to get bigger. 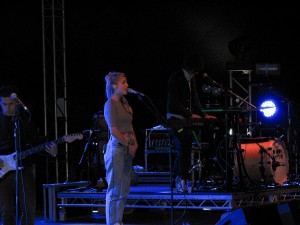 Johnny Marr played his new single, which was pretty decent, but it didn’t provide the religious experience of the Smiths songs that the crowd yearned for. Towards the end of his set they got their satisfaction and the singalong for ‘There Is A Light That Never Goes Out’ possibly gave the Welsh male voice choir a run for their money. 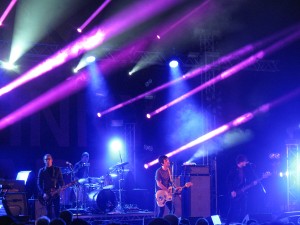 Lianne La Havas and her sultry vocals got a great reaction. She showcased one new sounding track which had a more big tent fuzzy guitar sound. She declared her love for the crowd and Portmeirion but she didn’t need to do much to win them over, they were giving as much love as they were getting.

To say it was blowing a gale on Sunday morning would be putting it mildly. Wild rumours were bouncing around about the fate of the main stage tent. The organisers got it all worked out by 3pm but the lashing rain was too much for some who made their excuses in the morning. Those who stayed, however, got the full benefit of what was undoubtedly the feel good moment of the festival. Chic! Chic! What can you say? Niles Rodgers brought the party he promised. How many white suits has this man got? The crowd absolutely loved the whole show and that bass player Jerry Barnes is just ridiculously talented. During the obligatory stage invasion one lucky lady got a central view of the Niles Jerry guitar-off. They certainly know how to jam and the drummer does a pretty decent Bowie. 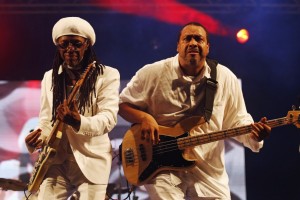 Caitlin Moran provided potty mouthed entertainment in the afternoon, at her in conversation with John Niven talk. Full of tales of disgustingly lustful twitter advances with celebrities she didn’t realise she’d soon be meeting in the flesh ‘He could wear him like a Sherlock hat’ of Benedict Cumberbatch, was just one example, she had the hungover festival audience in stitches. 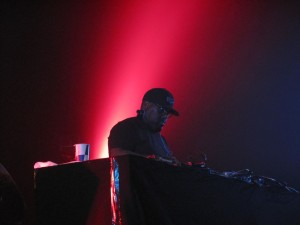 The DJs over the weekend were well curated and are clearly a major draw for many – Justin Robertson, Carl Craig, Horsemeat Disco, Dicky Trisco, Pete Herbert, to name but a few. Content DJs played a particularly good set in the Studio 6 tent. Frankie Knuckles dancing outside in the magnificient setting of the Stone Boat stage was a particularly special experience, especially for that often ignored niche fan, the bird spotting dance music afficionado.

All in all Festival Number 6 is a beautiful, adult, civilised, diverse festival and it is always fun to dart around like Patrick McGoohan. Same time next year…

View all posts by Ben Brown →