Have you had enough of the endless re-appraisals of ‘Sgt. Pepper’s…’ or ‘The Velvet Underground & Nico’? Well, we have so you can forget all that! In this brand spanking new feature Gigslutz will be looking back on some of the best albums you love that have been previously given short shrift. We focus our critical eye on the difficult second albums, efforts from long-forgotten bands, overlooked classics and more underappreciated gems from the past. Read on, this time it could be your favourite!

It’s been 13 years since D’Angelo blessed the world with the release of ‘Voodoo’. And in those 13 years the R&B singer has made less headlines about his music and more about his arrests for drug possession, drunkenly crashing his car into fence, flipping his Hummer off the highway, and even soliciting a police officer for sex, making it easy to forget the guy released possibly the greatest R&B album of the last 20 years.

Prior to the recording of ‘Voodoo’ D’Angelo had taken a four and a half year from the music scene after the release of his commercially and critically successful debut album ‘Brown Sugar’, an album which laid the foundation for the neo-soul movement of the late 90’s and early 2000’s. During this time the singer experienced a heavy case of writer’s block and spent the majority of his time lifting weights, smoking weed, and making music. It was after the birth of his first child in 1998 that D’Angelo had found new inspiration and began to write music again. He also travelled to South Carolina and to his hometown of Richmond, Virginia where he revisited the music that instilled him with a passion for music.

In the album’s liner notes Saul Williams writes about D’Angelo’s dissatisfaction with the state of R&B at the time. In a sense ‘Voodoo’s vintage and experimental sound was a reaction to the slick, radio-/club-friendly 90’s contemporary R&B sound.  ‘Voodoo’s whole concept was based on taking the R&B/soul back to its roots within African American music while at the same time moving forward into new territory, a goal of being equal parts Jimi Hendrix, Marvin Gaye, Curtis Mayfield, Miles Davis, and Wu Tang Clan all at once. 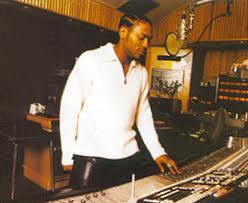 Recorded at the legendary Electric Lady Studios, ‘Voodoo’ utilized old school recording techniques and even the mixing board used by Jimi Hendrix. While other artists and producers at the time relied on state of the art digital equipment, D’Angelo made use of analog equipment and live instrumentation on ‘Voodoo’. The album was recorded live with no overdubbing, with the exception of ‘Untitled (How Does It Feel)’, which was a rarity for contemporary R&B at the time (even more so than it is today).

The album is opened by the slow funk of ‘Playa Playa’ a song with gospel overtones carried by the deep jazzy grooves of the bass line, and filled with a wide variety of sonic textures including smooth psychedelic guitar chords, sharp funk guitar riffs, gritty horns, and dusty drums.  The blend of funk, soul and hip hop sampling served up in ‘Devil’s Pie’ is a real standout on this album and takes a lot of chances in terms of concept.  The bass line is heavy and organic mixes with the improvisational sound of the drums to create this almost intoxicating groove.  The lyrics criticize materialism and lack of artistic credibility within Hip Hop culture while utilizing religious imagery and metaphors. The soulful sound of ‘The Line’ oozes spirituality and contains some of the best lyrics on the album. The imagery of D’Angelo standing there with a loaded revolver against his head lamenting over some mysterious adversity is nothing short of powerful. It’s a song about facing naysayers and adversity by sticking to your convictions and putting it all the line, echoing the brave concepts and experimental sound on the album. D’Angelo channels Otis Redding through the classic soul sound of ‘Send It On’. The smooth background harmonies and D’Angelo’s striking falsetto creates this brilliant contrast. The guitar parts float around the spacey sound of the Rhodes piano with sharp chords and delicate fills as they gracefully with one another with neither stealing the spotlight.

There’s this brilliant moment in the opening of ‘One Mo’Gin’ when the bass kicks, engulfing the listener in its warm wall of sound of delta blues bass and jazz nuances. The arpeggios played by the bass on the chorus frame the vocals perfectly. It’s a song that marries the bump and grind of late 90’s contemporary R&B with old school sensibilities. On the ‘The Root’ D’Angelo cuts himself open and reveals a story of heartbreak and a fear of being alone. It’s filled with metaphor and imagery while the same time it’s all very tangible and easy for the listener to relate, a real rarity for urban contemporary music even today. The guitar playing on the track is nothing short of exceptional as it goes in and out of these very complex musical textures and rhythms.  ‘Spanish Joint’ tackles Karma with its high energy samba and jazz fusion. D’Angelo shows incredible variation in his vocals as he follows the whirlwind of horns, guitar, and drums in a way that feels entirely improvised. D’Angelo breathes new life and masculine sexuality into Robert Flack’s ‘Feel Like Making Love’, making use of low-key singing, J Dilla influenced beats, and a “quiet storm” sound.

In his memoir ‘Mo’Meta Blues’ Ahmir “Questlove” Thompson , considered the “co-pilot” of the record by D’Angelo,  describes the recording and release of the album fondly and “…the way it out-Princed Prince” and ” and that “every single song is worthy of a chapter in a book”.  Voodoo is an album that takes the old and recycles it into something new, and in Questlove’s word’s “it connected to the past in an organic way.”. My favorite aspect of Voodoo is the fact it is music lover’s music , the kind where you put off whatever it is you plan on doing and strap on a pair of headphones and sink it your chair as the music takes over and submerges you into a deep sea of intoxicating grooves.