To the people who record entire gigs on their smart phones,

You are biologically blessed with two gaping holes in the front of your skull filled with jelly-like spheres called ‘eyeballs’. There are also another two holes on either side of your cranium covered in fleshy satellites called ‘ears’. These pieces of equipment are all you need to bring with you to a gig; you do not need to use your smart phone – or whacking great tablet – as a substitute set of visual and auditory organs.

I was around shortly before mobile phones and the internet began to dominate our lives. Everyone seemed to cope remarkably well at gigs without these devices, but nowadays bands have to beg their fans on social media not to record their set. You can, and will enjoy a gig without holding a piece of technology in your hand. How do I know? Well, reader; I am a reformed gig recorder. Yes, that’s right; I used to be one of you. I used to have my camera permanently fixed to my right hand, recording and photographing every move the band made so I could re-watch it on the train home, much to the annoyance of other commuters. 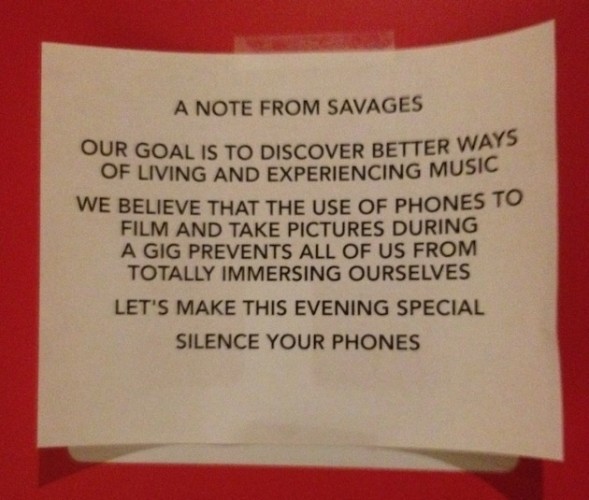 A note displayed at a SAVAGES gig

It’s ironic then, that despite my vast plethora of videos I found it hard to recall 70% of the gig I’d just witnessed. Unless prompted by my camera footage, I couldn’t remember what had actually happened on the stage. I’d invested hours listening to the band’s records, spent hard-earned money to see them live; and all I’d achieved was a mild form of amnesia. I didn’t take any of the good stuff in. When my friends finally asked me to stop being a complete weapon and leave the camera at home – things changed. Once I stopped staring at bands through an artificial eye, I started to remember things. Little details; like the way a particular singer smiled as she sipped her water water in between songs, and how one guitarist’s hands sped like demons up and down the neck of his guitar as he played my favourite riff. These are the moments of raw, live, musical experience you’re missing out on if you choose to live your life through a lens. It’s not worth the sacrifice. 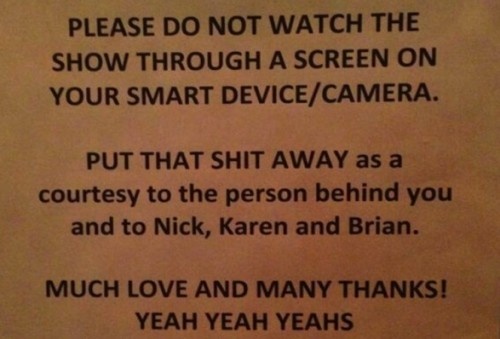 I’m all for making memories to reminisce over; but smart phones should not be the only way in which you do this, especially when there’s incredible live music playing. You aren’t truly living if you’re seeing everything through a lens, then filtering the living daylights out of it in order to look trendy on the internet. I bet your footage got 20+ likes on social media and you look slightly cooler to the 100+ ‘friends’ who generally ignore your online existence – but you’ve missed the point. You missed the opportunity to feel like a part of the musical machine – you missed it because you put a barrier between your eyes and ears – you used your stupid smart phone to record everything, non-stop, start to finish. You absolute weapon.

When you attend your next gig, remember that you have a choice. You can leave your phone at home or in your pocket – give it a go, I promise it will be worth it. If, however, you are a lens-loving lunatic who can’t function without a screen somewhere in your periphery, you can indulge in the following lens-based behaviours:

What you really need to remember, however, is one of the most important things in life; don’t worry about how something looks, concentrate on how it feels. Next time you reach for your smart phone when your favourite band are playing, consider that.