Alternative Hip Hop three-piece The Scribes are no newcomers to the music industry. The award winning group consisting of lyricist/multi instrumentalist Ill Literate, rapper Jonny Steele and beatbox maestro Lacey are renowned live performers having toured with the likes of Macklemore, De La Soul, Wiley, Chase and Status & more over the years.

Following the release of their album A Story All About How earlier this year, the group are back with a brand new concept album and we are hugely excited to be able to premiere the visuals for a track taken from it called ‘The Dust’.

The concept album, titled Mr Teatime & The End Of The World, is a 7-track Hip Hopera that documents the catastrophic end of the world in the year 2074 and the desperate quest of the eponymous last man alive to stop the rise of the robots and find other survivors. The intensely engaging story cascades across the 8 tracks that make up this project and create a truly memorable body of work.

‘The Dust’ is the third track in the tale and catches the story at quite a pivotal moment. Having been stuck underground for a long time and with the possibility of an escape growing throughout the track, the repetitive beat really catches the feeling of being trapped perfectly and combined with the creatively minimal video, is a powerful chapter in the ongoing saga. 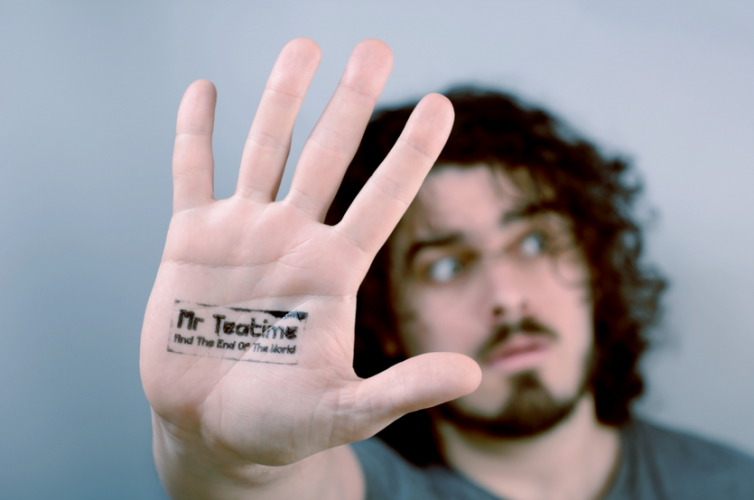 Talking about ‘The Dust’, The Scribes told us,

“The Dust is part of the wider narrative Mr Teatime & The End Of The World and was definitely one of our favourite songs from this project. It tells the part of the story where Mr Teatime has miraculously survived the initial apocalypse and lies trapped under rubble listening to the end of the world unfold, trapped in the darkness for an immeasurable span of time overhearing the horrors above. He listens as the robots rise up and hunt down the remaining humans whilst he stays alive by feeding on rats and drinking from a broken water pipe, knowing that he is on borrowed time. Musically we really tried to represent the relentless, almost oppressing, bleakness of his situation, and we’re really happy with the results. The track serves as a great lead in to the rest of the story, so if you like what you hear and do want to know what happens please do grab yourself a copy!”

With exquisite production, genuinely incredible lyrics and a story that grips hold of your imagination throughout, Mr Teatime & The End Of The World is a project that you simply can’t afford to miss. It is without doubt one of the most creative and extraordinary projects of the year and The Scribes deserve a huge amount of credit for creating such an emotionally captivating body of work.

Mr Teatime & The End Of The World is out on 11th December and you can download your copy on iTunes here.