After a shaky start with a questionable DJ – was he even a DJ? Or was he in fact a random guy feeding people grapes? – thankfully things pick up before Reverend and the Makers come on stage. The energy in the room is palpable after a mass sing-a-long to Arctic Monkeys’ ‘Fake Tales of San Francisco’, tactically played over the venue’s sound system. A slide show depicting a photo montage of the band fills the O2 Academy with anticipation, in a suspense fuelled countdown to the main event. Suddenly out of the darkness walks the Reverend himself: the mighty Jon McClure and his merry men… and beautiful wife Laura, her stomach a sign of the soon-to-be-born baby Rev.

Tonight is a celebration of their musical efforts over the past decade, but it’s more than that. It’s a celebration of the band’s accomplishments; with Jon and Laura expecting, Joe Carnall soon to be married and drummer Ryan Jenkinson’s new motorbike…the latter achievement eliciting the biggest cheer from the audience. It’s also gratification from the band to the people who have supported them over the years; with Jon dedicating ‘Long Long Time’ to his mother (and as an afterthought to the late Robin Williams) and thanking various relatives and label members, including Mark Jones.

Tonight also epitomises what it means to live in or come from Yorkshire. McClure muses between tracks in light of the Scottish independence vote, declaring that with Yorkshire’s population being roughly the same as that of Scotland, if we ever get a chance to go independent we should say “fuck ‘em” and go it alone. There’s a distinctive political tone to tonight’s show; an aspect which shouldn’t be surprising, given tonight sees the more politically didactic records The State of Things (2007) and French Kiss In The Chaos (2009) being dusted off and aired once more. This sentiment is perhaps best felt in the title track ‘The State of Things’, where Sheffield proclaims “I’ll tell you about the state of things” back to the band. We’ve had a rough time of it too, NME exposed in this week’s issue, with a January 2013 survey finding Sheffield to be one of two UK cities hardest hit by the current economic climate, with a drop in average earnings of a whopping 19.2%. This fact hasn’t stopped the Rev Army from shelling out for tickets tonight, though, and it’s clear from two sell-out shows that the band has an unswervingly loyal fanbase.

Out of the two albums fans have come to hear, it’s clear The State Of Things is the one that’s preferred, yet ‘Silence Is Talking’ is one of the night’s highlights; it sees the audience chanting “feeling in love is paramount” in unison thanks to the track’s simplistic lyric, driving beat and trumpet part which lends itself to being shouted, football chant style “ba ba ba ba baa ba ba ba ba baaa”. Another highlight is ‘Sex With The Ex’, which is a welcome respite from all the bouncing we’ve done thus far. There’s a particularly funny moment when McClure comments on the accurate stereotype of the tight Yorkshireman, evidenced by the audience putting lighters away because halfway through the song they think “I’m not wasting me lighter fluid on this!” McClure works the crowd throughout the night, dividing us into Girls vs. Boys for a raucous rendition of ‘He Said He Loved Me’ as well as left side vs right side for various songs. 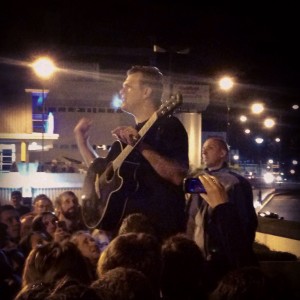 The night is not without faults or lowpoints, but this is entirely expected from the fact tonight sees two albums being played in their entirety. It’s expected that there will be songs played that are less popular or familiar, and therefore audience participation levels fluxuate over the course of the night from polite nodding along to raising the roof as we bounce like maniacs.

There’s a wash of nostalgia as the night comes to a close on ‘Armchair Detective’ and there’s confetti  that ensures they go out with a celebratory bang, before the routine carpark sing-a-long. This band are people like us, prepared to stick around after curfew to give those who have supported them for the last ten years that little bit more. It’s this which makes them – and their music – so bloody brilliant.

All in all this evening has been an entirely satisfying trip down memory lane and a bloody good jumparound. Here’s to ten years of Reverend & the Makers… and hopefully many more to come!