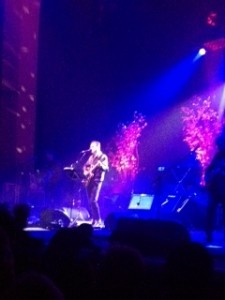 I suppose I’ll have to admit to being a bit of a bandwagon jumper when it comes to Richard Hawley. He had previously slipped under my radar until is latest, and most successful, Mercury nominated record was released, the brilliant ‘Standing at the Sky’s Edge’. The album is superb and has rightly promoted Hawley up a couple of divisions to the point where is now headlining the 5000 plusBrixtonAcademy. Not bad for someone, now 45. Good things come to those who wait.

“Where the fuck did you lot come from” he gruffly bellows as he enters the stage before starting with Standing on The Sky’s Edge. His stage patter throughout is almost as entertaining as the music. My particular favourite being his response to a shout from the crowd in relation to his leg injury which saw him perform on a wheel chair last time around inLondon.

Hawley: “Mind your own fucking business, how’s your mother”

Although it may seem harsh in print, all of his stories and chat between songs were done with top humour and endeared him further to the crowd.

Hawley and the other 4 members of his band offered up 2 hours of dirge, feedback and pop for a set mainly focused around the new album. The stage was decorated with fake trees and fairly lights which helped set the mood, especially for set closer ‘Down in the Woods’. The particular highlights for me were new number ‘Don’t Stare at the Sun’ and ‘Water Boy’.

This was my first Richard Hawley gig and my biggest surprise was probably the reaction of the audience. They were completely static throughout. Almost falling into a zombified trance watching him. Bizarre! Although I was enthralled I did not quite reach the trance level.

Before the end of the set Hawley descried how he was ‘always the bridesmaid, never the bride’ in reference to his previous Brixton appearances with Pulp, Weller and Arctic Monkey’s’ but lack of solo gigs, to which he threw a bouquet of flowers into the crowd. It may be his first but judging by this performance however it won’t be his last.

1. Standing at the Sky’s Edge

4. Tonight the Streets Are Ours

7. Leave Your Body Behind You

9. Open Up Your Door

11. Time Will Bring You Winter