At the beginning of June, I’ll be watching The Stone Roses at FinsburyPark, 25 years after seeing them for the first time in a packed, sweaty club in South Manchester.

From that day on, I’ve been pretty obsessed with all things Roses but following the infamous Reading gig, John’s none too impressive solo career and Ian’s questionable vocals, in October 2011 found myself signing a Facebook campaign urging The Roses not to re-form. I had my teenage memories banked and they’d surely destroy the myth and tarnish those memories if let loose again in their 50s. Wouldn’t they?

In 1988, aged 17, I was bang into my music and already spending all of my pennies on excess alcohol and live bands in Manchester. The Madchester scene (like Baggy, a term I never remember hearing at the time until the release of The Mondays EP) as such hadn’t yet emerged – I’d heard and loved Sally Cinnamon at the tail end of the previous year but, surprisingly for some, it was the release of their second single, Elephant Stone, that really got me – the groove had arrived that was going to seduce not only the indie kids but cross over to so many other genres. And boy, that groove was going to take us places…

The obsession was building but it was delivered with an atomic boom when seeing The Roses live for the first time. The little known bands that we were used to seeing in Manchester usually played The Boardwalk (what a venue) or at best a half filled International. Even before the band came on stage you knew this was different. The place was bouncing – people looked different from the usual gigs, people dressed different from the usual gigs – I was back on the terraces rather than in an indie club. And I fucking loved it. And then the band arrived… 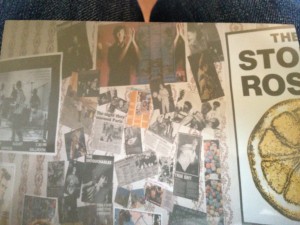 And that look of effortless cool. The singer who came on ringing a bell entrancing all within, the ice cool guitar player who seemed to be playing in a different stratosphere, the bass player who epitomised the groove I’d so fallen in love with. And the drummer, The fucking drummer…..

Having grown up a massive Keith Moon fan – as much for how he looked while drumming as for the noise he got out of the skins – Reni was ticking all the boxes. Hunched over his kit, hat pulled low and octopus arms splayed, it took a lot to remove the focus from the frontman – but if he hadn’t already then he certainly would once his harmonies kicked in. The harmonies perfectly harnessed the vocals of Brown – the reason his voice has always sounded better with the Roses than when solo.

I left that gig a different man, I had found my band. A band that 25 years later, would still be my band, but I’d be sharing them with hundreds of thousands others. The suede jacket and white jeans were soon replaced with flares, parallels and long sleeved Ts. In fact it wasn’t too difficult ditching the suede jacket as it was robbed out of my car in Longsight while we were at the gig… 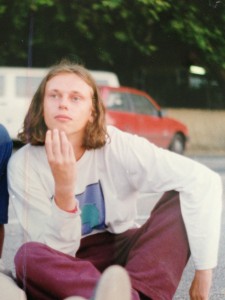 Thereafter, we followed The Roses as much as we could, although the famous Blackpool Empress Ballroom gig was missed due to a pre-booked lad’s holiday in Tenerife. I still regret not swapping 2 weeks in Tenerife for 1 night in Blackpool.

The Roses were largely conspicuous by their absence on the streets of Manchester. Where the other movers of the day would often be seen in Afflecks Palace, Dry Bar, The Hacienda etc, I only remember seeing Ian Brown once in Manchester – in Eastern Bloc records with a pile of Roses 12”s pulling monkey faces at people.

Once, having got a free coach to London for a student march, I headed down to the Kings Road instead where I passed a lone John Squire window shopping. I was telling my non-Roses following mate of the significance of it when I felt a tap on my shoulder and I was confronted by the other 3 Roses asking where it was I’d seen John as they’d lost him.

10 minutes later, having met a friend to whom I was regaling the tale, there was a whistle from the other side of the road where all 4 Roses were waving and giving me the thumbs up. My flares shook with pride for months.

Then there was Spike Island. Written about by so many since but remembered by so few (how very 60s). Luckily I still have a copy of The Face with my face within to prove I was there. ‘Don’t ask me anything, I’m bombed out’ was the caption text – probably not my finest moment – but it sure as hell felt like it back then. Apart from the euphoria I felt each and every time I saw The Roses, my main memories of that day now are acid, black snot and getting stuck in my mum’s bathroom window when trying to let us all in for the post-gig party. 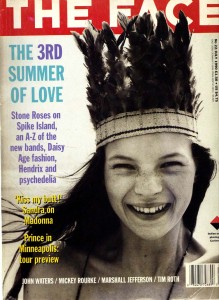 Fast forward to a train in Amsterdam, June 2012.

In the previous 24 years my love of The Roses had continued. I’d got married (first song 10 Storey Love Song and ‘Until The Sky Turns Green’ engraved on the wedding rings), I had kids (both Roses not 1D fans) and I even allowed a kitten (named Cinnamon) into the house (adorned with original John Squire artwork).

Unbelievably, the band that had told us they would be the biggest in the world were now back on course to being so. Not through years of hard work, albums and touring. But by splitting up, bickering and (in John’s case) turning his back on the music scene.

250,000 tickets for HeatonPark sold in under 60 minutes were testament to this.

When The Stone Roses arrived on the scene in the late 80s, Tarzan Boy by Baltimora was the regular playlist tune at Old Trafford. Nowadays, the team run out to This Is The One while tens of thousands of fans, both home and away, relate to Ian Brown and The Roses (Ian, John & Mani are all Reds while Reni’s a blue). Ian even sang a solo version of This Is The One on the Old Trafford pitch prior to Gary Neville’s testimonial – how life had changed.

Now older, grumpier and harder to impress, I had my HeatonPark tickets secured but I needed more. Negotiations with the other half had secured an increase in my annual Amsterdam trip allowance and we were off to the usual haunts prior to a far from usual appointment with 4 Mancunian legends. And a very fucked Mackem.

It was on the train from Centraal Station to the Heineken Arena, that I met a couple of guys from the next generation who shared my love of The Roses. One, Michael had already been to both Barcelona gigs and had tickets for all 3 nights of HeatonPark. The other, Steve, was realising his dream of seeing The Roses live and was certainly making the most of what Holland (& Remco) had to offer. I was beginning to feel at home again. 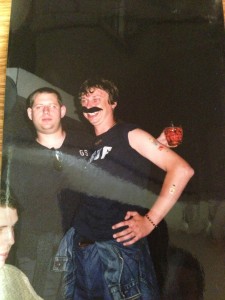 The crowd at the Arena was a mixture of clued up Cloggies (15 of them in our mob – I’ve been on a 1 man Roses education mission over the years) and mainly older Brits. Pretty much all were feeling the effects of what Amsterdam has to offer though which seemed to be reflected in the slightly lacklustre crowd buzz. Can’t say I noticed though, as from the initial strains of ‘I Wanna Be Adored’, I had my own 1 man party bouncing around the side of the Heineken Arena

They were back, and they were tight as fuck.

As expected, all of the first album was played (well, all except 1 track – see later), but it was the funked up version of Fools Gold that really got me and finally got the crowd moving up a gear. Finally making my way to the front (even in the early Manchester days this was close on impossible, but the effect of a days worth of skunk on 2,000 Mancs made the mission slightly easier), only to be informed that ‘”the drummers a cunt and there’ll be no Resurrection”. Cheers Ian

So, it was the time for the big one – Heaton Park. For many, the rip-off cabs, the weather and the long walk back into Manchester detracted from the homecoming gigs, but those factors really shouldn’t come into consideration when the band had put on such amazing shows. Personally, my biggest issue was the 75,000 others that I was sharing the park with – so with the knowledge that a euro away is miles better than a home game at Old Trafford, we blagged passes to one of The Roses remaining festival shows and a few weeks later we were heading to Belgium for Pukkelpop Festival.

Following on from The Foo Fighters headlining the previous night, the general consensus from the Belgians was ‘who are The Stone Roses and why are they top of the bill?’ Hopefully, these questions were answered after another cracking set, though the question was soon replaced by  “Why is your Mackem friend dancing naked in his Adidas Gazelles?” The first question was more easily answered.

And so, after an hour staggering round the festival site and a madcap bus journey to Holland in the dead of night to stay on a boat (a fuckin boat. In Holland. Don’t ask…), my Roses summer was drawing to an end.

They may not have gone as far as recreating my childhood, but they gave me a bloody brilliant summer, some brilliant mates and re-introduced me to Euro aways – long after high prices, low availability and The Glazers had stopped me doing so for my beloved Manchester United.

So, was the resurrection successful? We’ll never be able to recreate those halcyon days where a lack of responsibility and an overabundance of youthful love made The Stone Roses the most important thing in many of our lives. And, for at least a while, they were Manchester’s best kept secret. They now seem to be Britain’s best kept secret.

So roll on FinsburyPark. It may be 25 years on, and I may not be as bombed out this time, but I’ve got a feeling I’ll once again be intoxicated on the psychedelic pop I love. 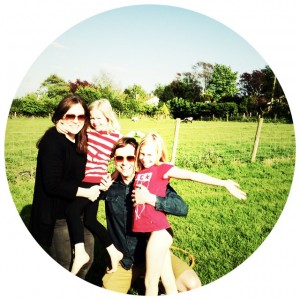