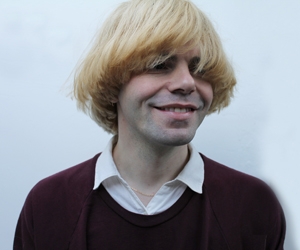 Upon discovering the line-up of 90’s icon Tim Burgess’ solo venture, little persuasion was needed to venture down to the revamped basement of Newcastle University on an excessively cold Wednesday night. A backline containing Charlatans guitarist Mark Collins and Primal Scream legend Martin Duffy came as a pleasurable surprise and after a few listens to Burgess’ recently released second album, ‘Oh No, I Love You’, I harboured high hopes for this one.

I assume that I don’t have mention Tim Burgess is the lead singer of Manchester conquerors The Charlatans. Well I have now so more fool me. With this fact in mind I was startled at the low turnout, with the venue way short of even 50% capacity. For me this transmitted to Tim and accounted for a rather downbeat start as sound problems persisted. The fact I could actually hear some dirty fucker pass wind in front me testifies to that.

Thankfully the show improved immeasurably as Tim performed tracks from his latest endeavour and 2003’s I Believe (which if memory serves me right, I snapped in disgust upon my first listen in my tender teenage years. Sorry mate). Stand out efforts included lead single White and The Doors of Then as well as the well received Years Ago and the elated Oh My Corazon.

Personally the record does not transmit as well in a live arena as the pace is rather pedestrian and has that chilled out Sunday vibe which works a lot better sat with a beer and a cigarette rather than surrounded by 100 or so 90’s rejects wanting to strut to One to Another. This was by no means a terrible display, but in all honesty, somewhat forgettable. Sorry mate.