If I was to dare to reduce Nick Cave to a mere simile, I would say he is like Marmite. Not just because he is polarising and a bit of an acquired taste, but because his voice is dark and rich (not yeasty, though just as enjoyable with crumpets and cheese). Even if his gothic ballads aren’t for you, it’s easy to recognise the talent Cave possesses when glancing at his track record. He’s been performing since 1973 with several different outfits, he’s scored and recorded several film soundtracks, published novels, acted in films, and wrote the screenplay for Aussie Outback Western The Proposition (2005) and the acclaimed Prohibition-era set Lawless (2012). But perhaps the most astounding quality Cave shares with Marmite is that he seems to improve with age (see Marmite XO). At 57, he continues to create and perform with more gusto than artists half his age. Cave gives hope that the ageing can be a beneficial and progressive process, in which one masters a sense of who they are and what they are capable of achieving, rather than the expected mid-life crisis that I imagine many of us have to come.

Last night I watched the special satellite screening of 20,000 Days on Earth, not knowing quite what to expect. I’d read it was a ‘docu-film’; a merging of reality and fiction. I was worried that might make it pretentious, given Cave’s eccentricity combined with this being the first feature film created by two visual artists who aren’t primarily film-makers (Iain Forsyth and Jane Pollard). Surprisingly, it wasn’t over-seasoned; the whole thing was beautifully rendered. Don’t get me wrong, it is arty and structurally contrived, it isn’t strictly fact or fiction, but it’s engaging and entertaining. I found the film to be incredibly intimate, an examination of who Cave is as a person and simultaneously how he and his bandmates the Bad Seeds – whose incredible musicianship isn’t overlooked during the film –  go through a creative process. The scenes with the band recording and rehearsing were impressive musically, and it was refreshing for the spotlight to be taken off Cave to showcase the passion of Adamson or Ellis, if only briefly. An out-take after the film of Ellis improvising on the violin during the recording of ‘Jubilee Street’ is phenomenal. 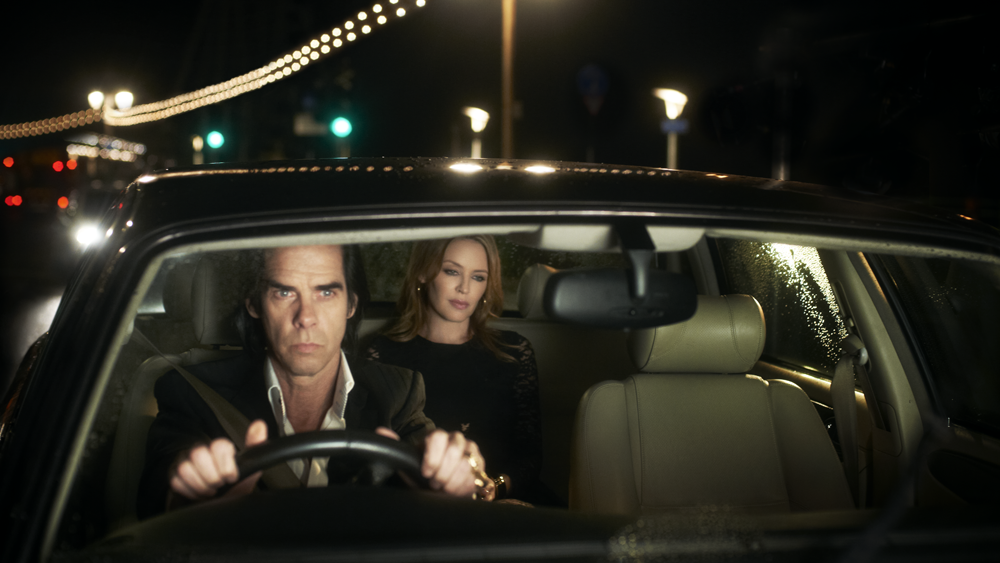 As the title suggests, the film supposedly tracks Cave’s 20,000th day on Earth, and begins with him waking up in bed with his wife one morning, though the time scale becomes distorted as the film goes on. Settings change drastically: one minute we’re watching Cave drive around his adopted home town of Brighton, the next we’re seeing the band record with a children’s choir in France. During the live Q & A broadcast directly after the film, Forsyth and Pollard described how the film had started life as a documentary tracking the making of the 2013 album Push the Sky Away, but very quickly became something different to a standard music documentary due to them working with such an extraordinary artist. According to the directors, all of the locations were decided before filming along with specific situations. A scene where Cave speaks to a real psychiatrist is a good example of this. However, all of the dialogue that arose from these artificial situations was spontaneous, which was quite clear and made the experience all the more entrancing. The film was not without humour, though: an anecdote involving Nina Simone, champagne, sausages and cocaine had the theatre buzzing with laughter. Themes of transformation and the prospect of becoming someone else are prominent throughout 20,000 Days on Earth, along with glimpses of Cave’s vulnerability. The shifts between his menacing, charming and commanding presence don’t feel at all staged, which demonstrates remarkable skill from the film’s creators.

For reasons unknown, the irritatingly vanilla Edith Bowman was chosen to host the event at the Barbican. It was pretty painful watching her flounder around a character as strong as Cave. At one point Bowman queried whether it “would be okay” to show an out-take from the film: this was like watching Stacey Dooley try to do Newsnight. After the Q&A the stunning live performance from Cave, Ellis and Adamson soon made me forget Bowman’s hapless hosting: six songs were selected from the large back catalogue of Bad Seeds material: ‘The Weeping Song’, ‘No More Shall We Part’, ‘God is in the House’, ‘Into My Arms’, ‘The Ship Song’, and finally, ‘Mermaids’.

You don’t have to be a fan of Cave or the Bad Seeds to dig this film, though familiarity with their work certainly helps. If you’re interested in music, writing, art and the creative process behind that, you will find 20,000 Days on Earth a real treat.

Tracks Of The Week Playlist, Aug/Sept ’14