The days where you’d google “Superfood” and find nothing but pages of sites listing which fruit and veg are packed full of promises about curing your lifelong problems are long behind us. It’s been over a year since the unveiling of their debut eponymous track yet Superfood is still the buzzword in the indie-rock world. The Brummie four-piece first emerged back at Christmas 2012 under the name of Junnk at the infamous Peace Christmas party at the Rainbow but with the gig-goers having nothing to check out beforehand it would have been easy for them to fall out the loop. This is Superfood though and soon enough the word had got around that there was another B-Town band on the scene that could get bigger and better than the rest. 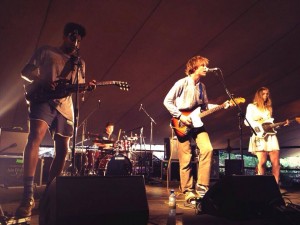 Making themselves known to those not lucky enough to have been introduced in person yet with a song themed around the colour of food in a fridge was a risky move but ‘Superfood’ with its fuzzy heaviness fine-tuned with a little bit of Britpop was quick to rid anyone of any doubt anyone might have had – NME even praised it as “something that shimmers so hard as it swaggers”. Sure enough, they gained an even bigger – well deserved – hype which led them to signing to Infectious Records, home to Drenge, alt-J and many more. Their first release on the label was MAM EP which delved into something more than their rowdy façade. ‘Houses on the Plain’ and ‘Melting’, still with the same ‘90s distortion-drenched guitars and inaudible yet endearing shrieks, shows off a more delicate side with the slight drop in tempo.

They’ve gradually moved away from the Britpop label they’ve been brandished with and instead replaced it with a more classic sound that still hasn’t moved too far away from the Superfood everyone’s grown to love. Their most recent track ‘Right to Satellite’ introduced a more colourful ‘60s outlook with a Temples-esque intro but then the jumpy chorus still quickly instils pits in their live sets.

In a year they’ve done a lot – now you can even find them on the first page of Google and it mustn’t be easy to gain band-crush status from Peace’s Harrison Koisser. They’ve had support slots with the likes of Peace, We Are Scientists and Wolf Alice and even a couple of sold-out headline shows. The big question is will things keep going up for Superfood? With their debut album on the way very soon and more gigs being announced regularly it’s likely super cool Superfood will be in the limelight for a long time to come. 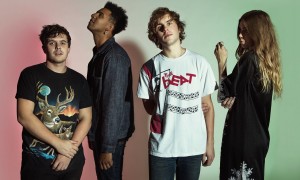 EP REVIEW: Jacko Hooper ‘For You’