Christopher Karloff left Kasabian (or was asked to leave, the story has never been confirmed) during the recording of their second album ‘Empire’ in 2006 due to – all together now! – creative differences. Despite the fact that, as the lead guitarist, he played a huge role in creating what have now become anthems (Karloff co-wrote all of the debut album with Serge, as well as 3 tracks on ‘Empire’ before parting ways), Kasabian carried on, and the rest is chart-topping, festival-headlining history.

Following a move to New York, Karloff returned with a new project last year. Black Onassis – formed with New York musician Nick Forde – saw the anthemic rock of Kasabian fused with electronic and dance music, with influences from artists as far and wide as The Prodigy, Jimi Hendrix and Vangelis. Add to this guest vocalists – including Liela Moss of The Duke Spirit and Morgan Kibby of M83 – and you have a collection of dystopian influenced anthems designed to fill dancefloors and live venues in equal measure.

We caught up with Chris as he prepared for the UK tour:

First and foremost, congratulations on the album. It’s clearly a statement and a celebration for the bond between electronic and rock music that purists for either genre might fail to understand. With the electric guitars vibrating in unison with the synthesizers, it was – for me – the soundtrack to a dystopian harmony, as incorrect as that may sound. In short; if this doesn’t convert those darn sticklers, nothing will.

Thanks man, glad to hear you’re into it. That’s a massive compliment. I really appreciate that.

Does ‘Desensitized’ sound how you imagined it would when you first started the project?

In many ways it does and in other ways it really surprised me. When I was writing I didn’t really have it all mapped out in my head. I had an idea of what kind of album I wanted to make, but ideas were constantly evolving and sometimes changing completely. Usually it starts from something simple like a beat or riff and goes from there- with loads of adding, subtracting, and head scratching. Sometimes the end result can be unrecognizable from that original thought.

Do you think recording in New York gave the album a different sound to if it had been recorded in the UK?

I think it definitely contributed to the overall sound.  During the day it’s chaotic, always moving, never static. But there are these moments at night that are really serene and peaceful, and you look out at that skyline and all that chaos is gone, and it’s an incredible feeling. Also, being the birth place of hip-hop and home to so many different cultures really influenced my writing and made me want to branch out more.

Certain tracks, particularly the album’s title track and ‘Brain’, aren’t a million miles away from Kasabian’s anthemic combination of electronica with rocking killer choruses – obviously a sound you played a huge part in creating. Was there ever a point where you wanted to disassociate yourself from the genre completely?

No, not at all. To be honest, when I’m writing and recording I try not to think about genre boundaries at all, or even what kind of people the music will appeal to. I feel like that would be a massive buzzkill. It’s all about doing what you feel at that time and what feels natural.

How did you decide on the guest vocalists on the songs?

It was all through people we know – people we’ve toured with in the past, or just friends of friends. They are all strong personalities and really good singers, so we put the lines out and asked if they wanted to work on a track with us. Luckily it all turned out well.

Do you have a wish list for featured vocalists on album #2?

I would love to work with Jehnny Beth from Savages. She has an unbelievable voice. It would be cool to collaborate with a hip hop artist as well. I feel like I’ve got a few tunes that would really work well with that sort of thing.

You’ve spoken of how different voices can “change the whole dynamic of a song”, is this the reason for the using the original vocals with visuals on tour; to give a live representation of the tracks intended dynamic rather than a new one with a new vocalist?

We use a lot of visuals at the show to enhance the overall experience. We want to create a complete environment. It has to look good, sound good, feel good. I think that’s really important.

The concept of the tour – featuring these visuals and lights to incorporate the presence of the guest vocalists – is incredibly exciting. Are there any nerves regarding technical hitches?

Technical difficulties are a reality, I find if you worry too much about them that’s when they come out and kick you in the nuts. Sometimes hiccups and mistakes can be hidden blessings. The threat of it keeps it interesting and keeps the adrenaline pumping. Hopefully we keep the hitches to a minimum though. I feel like I just jinxed myself…

Were there ever discussions about how else the album could be toured? Masks? Kidnapping the featured artists?

I mean, yeah. I’m always thinking about it. It would be great to get to a level that I’m not restricted by venue size and budget limitations. Someday, I hope. I will leave the masks to Slipknot though. The kidnapping; maybe.

With these visuals in mind and them playing such a prominent role in your live shows, what are your thoughts regarding holograms of 2Pac, Elvis and other deceased artists?

Well, in regards to holograms in general I think all depends on the context of it. It certainly can work and look amazing. But on the other hand it is a little disrespectful. Maybe the deceased wouldn’t approve. There’s no real way of knowing, is there?

Any artists who have passed who you’d like to make a guest appearance at a Black Onassis show?

That’s a very good question. If I had to choose just one it would be Ian Curtis.

You’ve set the bar pretty high for yourselves with such an innovative debut tour, does this mean you’re going to have to progress at a quicker rate than other bands?

I think you have to always set the bar high for yourself, regardless of whether you are just starting out or you are at the top of the heap.

Perhaps a 4D show, to go one better than Kraftwerk.

4D? Do you mean like spraying water on people at shows and stuff? I don’t know about that. You could really freak people out or piss them off.

Artists as varied as Kraftwerk and Nirvana have been cited as influences on Black Onassis; are there any other current acts whose output you feel are influenced by a similar assortment of bands?

I think anyone who has played a synthesizer or programmed a drum machine has been influenced by Kraftwerk in some way.  Nirvana defined rock in the 90’s and even extended their influence into the 2000’s. They are both artists that any musician should have a deep appreciation for. Music might not sound the way it does today if either of those bands hadn’t paved a path.

There’s a dystopian sensation when listening to the album, even with less lyrical tracks. ‘Humans Animals’ – with the repeated vocoded line “humans are animals” – could have been straight from a montage of a remade Animal Farm. Was dystopian literature and film an obvious influence?

Massively. I’m a huge fan of dystopian novels and films. Movies like Bladerunner, THX 1138  and books like Phillip K Dick’s ‘The Man in the High Castle’ were a big influence on the sound and overall feel of the album.

Are all rock stars equal?

Well I like to believe that all humans are equal, so I guess the answer to that is yes! 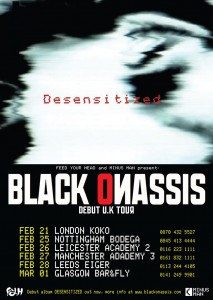 As the fan of a band, it’s always exciting – and often more innovative – when a member leaves (either completely or temporarily) and comes back with a new project like Black Onassis, rather than the generic solo album. Gorillaz, The Dead Weather, VCMG, Arcadia, Atoms For Peace… Are there any that stand out to you?

I love what Damon Albarn did with Gorillaz. It was so innovative and unique, and I love that they like to maintain a sense of anonymity by making themselves into cartoon characters and playing behind screens at shows. And the music and collaborations were great. I really like Atoms For Peace too. Anything Thom Yorke does is mind blowing- even his solo work.

Obviously there’s the UK tour in February, what else do you have planned for 2014? Any festivals booked?

We plan to play more in 2014 and are always writing new material. Would love to do festivals this summer, we will see what happens.

What are your tips for 2014; any new bands or new albums from current bands?

Really loving The Orwells. They are great live. Also saw Drenge play in Brooklyn recently. There is a massive amount of noise coming from just the two of them, and that kid is an incredible drummer. Good stuff.

Finally, with Kasabian’s 10th anniversary Homecoming show in mind, do you ever see yourself reuniting with the band, even if just for a one off appearance at an event like this?

Thanks very much for your time and best of luck with the tour.