After playing some of the biggest gigs of all time and 9 solo albums you would forgive Bonehead and Vinny Peculiar if they had decided it was time leave the music business all alone and put their feet up. Thankfully, thoughts of this kind have never entered their minds. After initially getting together to work on an EP ex Oasis man Bonehead (Paul Arthurs) and Manchester based singer, songewriter and poet Vinny Peculiar decided to go one step further and do a full album. From what we’ve heard so far here at Gigslutz it’s very impressive and certainly gets our seal of approval. Vinny and Bonehead kindly took the time out to give Gigslutz the low down on what to expect and what is coming next….

GS:  So how did Parlour Flames come about? You have worked together before I believe?

Vinny Peculiar: Bonehead played guitar on a few European dates with my band a few years ago and they went well. We made plans to work together in the future and an opportunity arose last year to do just that, what started off as an EP project soon turned into an album.

GS: Is it true that Bonehead was the manager originally?

VP: Bonehead looked after the band briefly yes, we met through Mike Joyce (The Smiths) who was drumming for me at the time.

GS: You have both had great careers, what inspired you to do another band at this point?

VP: We found a lot of common ground in our song writing, and we took it from there. It seemed to evolve quite naturally, it felt right, so forming a band was the obvious next step. It’s what musicians do. We knew we were onto something.

GS: Here at Gigslutz we are digging the new tunes. People expecting some form of Oasis off shot will be surprised though. Can you explain your sound and to readers who may not have heard you before?

VP: There are some elements of the old school Bonehead guitars in songs like ‘Jump the Brook Ruth’ and ‘Too Soon the Darkness’, they add weight and drama, there are also lighter more orchestral elements on songs like ‘Never Heard of You’. It’s a song based album, the songs have their own narratives, they tell little stories. ‘Manchester Rain’ has been described as sounding like The Mamas and the Papas meets Shack, there are cellos, flutes, pianos, xylophones, trumpets, its a mixed bag covering sadness and grief, delusion and psycho fantasy. Regardless of diversity there is a definite Parlour Flames sound that has emerged…

GS: That sounds brilliant! How have the songs came across live?

VP: We have been getting really good reactions, people only know a few of the songs at the moment from our clips on Soundcloud but ‘Pop Music Football & Girls’ seems to be going down especially well. We have a great band so that always helps any live situation. 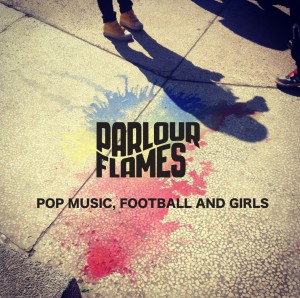 GS: Cherry Red records was an interesting choice to release your album on. Why did you pick them?

We met with a few labels, Cherry Red stood out, we liked them as people and they seemed to talk sense. They are a grown up independent label and their roster includes Bill Nelson! That swung it for us…

GS: What would you class as your musical career highlights to date?

VP: I’ve played Glastonbury a few times, thats always a lot of fun. Working with Bill Drummond also a highlight for me, making SOUP into art and swopping kettles for Kettle Drums…

Bonehead: Oasis debut album getting to number one in the charts, and selling out 2 nights at Knebworth are 2 massive highlights for me.  I’ll never forget that feeling when we were told the album had gone to number one. Also flying into Knebworth by helicopter and looking out over a sea of people was pretty special.

GS: Not your average day at the office is it! Are you still in touch with any members of Oasis?

BH: Yes, I’m still in touch with Liam, I was over in Barcelona last year with him to see the Stone Roses. I speak to Alan by phone quite regularly, Guigs I’ve not seen for a while, but we get in touch now and then. Noel I saw in concert in Glasgow last year, we met up and had a catch up backstage which was nice.

GS:  As a founding member would you be up for this reunion that keeps getting banded about?

BH: I’m not sure if it would or should happen, but if it did, I’d get up and play for sure.

GS: We have a monthly radio show that goes out on Optical Radio on the last Thursday of every  month. We ask all of our interviewed bands to pick a ‘mini playlist’ of 3 songs which we will play on air. What would you like us to play?

VP:  Three of our favourites are ‘Hang Onto Yourself’ by David Bowie, ‘Guiding Light’ by Television and ‘The Only Living Boy in New York’ Simon & Garfunkel

GS: Top choices. Ok, are there any new bands about at the minute you are listening to?

VP: Every now and again a pop song will blow my mind like the Gotye single ‘Somebody that I Used to Know’ or the Lana Del Ray song ‘Video Games’. I also quite like Foals, they have something going on…

BH: I quite like Beach House at the moment, Tame Impela have a few songs I like. I’ve kind of fell behind with what’s happening musically whilst we’ve been recording, so am going to make an effort to catch up with what’s going on.

GS: Vinny, can we expect any more solo albums in the future?

VP: Yes there will be. The new album is all demoed and ready to do, I’m not rushing it just now as we’re pretty full on with Parlour Flames. Cherry Red are releasing a Vinny Peculiar compilation due September this year and I’m aiming have the new Vinny album proper ready to go next year although both these dates could slip a little…

GS: The album is due for release in What are your plans for the future? Do you have a tour planned and festival dates?

VP: We have lots of gigs over the summer including festivals, Glastonbury, Secret Garden, Isle of Wight and a few others we’re not allowed to mention, we are also recording new PF songs over the summer so lots to keep us busy,

The new single ‘Pop Music Football & Girls’ will be released as digital download only on 13.5.13. You can buy it from iTunes by following this link