Acid Jazz have a long history with Chris (who coined the term ‘acid jazz’) and Mick (founding member of the Style Council), who appeared on one of the label’s earliest and rarest singles as ‘King Truman’ back in 1988.

Their new album, Back To Business released via Acid Jazz records, features a variety of styles including ‘Jerk Chicken’s ‘60s dancefloor groove with Memphis guitars, Hammond Organ and Wurlitzer 112 (the sound made famous by Ray Charles on ‘What I’d Say’), the Latino soul crossover stomper ‘Surf ‘n’ Turf’, which takes its cues from the West Coast Beach Beat sound of ‘60s California, and the skipping Detroit flavoured groove, with Jackson 5 style fuzz guitars, swinging Farfisa organ and Wurly Pianos of ‘It’s Alright’.

Back To Business is an exhilarating, contemporary fusion of timeless genres on an album that perfectly distils all these sounds to create the ultimate-sounding Acid Jazz record by two legends of the scene.

Exclusive interview with Chris and Mick for Gigslutz:

Can you please tell me how you both first came into contact with each other?

CB: I met Mick when he came in for a session to play on some tracks on the first Galliano album for Talking Loud. His playing blew me away, so I then asked him to play on a few tracks on my first Quiet Boys album on Acid Jazz.

How did the King Truman collaboration come to fruition?

MICK: In 1988 Me, Paul Weller and Dee C Lee worked on a tune not intended for The Style Council. It was a Parliament/ Funkadelic-inspired funk tune and we wanted a quick, anonymous release and the Acid Jazz label, then in its infancy, were going to put it out. Polydor objected to Paul’s involvement and the record was withdrawn before its official release. Consequently there were only a small amount of original records that saw the light of day.

Your new collaboration looks and sounds fabulous. How did this come to fruition?

CB: Mick and I have made a lot of albums a while back as both Yada Yada globally and as Soundscape UK in the USA. We had some back catalogue royalties come in and I just called Mick and asked if he fancied using the dosh to record a new album. We worked partly together and partly remote as we were still under Covid restrictions when we started working on the LP.

Is it just you two playing on the tracks or have you drafted in some fellow band members?

CB: Obviously Mick played all the keyboard parts and I mainly produced the drums, percussion and bass side of things. We had two fab guitar players on the album. Simon Bartholomew from Brand New Heavies played on a couple of tracks plus the 45 cut ‘Wiggle Wiggle’ and the other tracks came from Julian Burdock including the stunning lead stuff on the single ‘Sumthin’ Else’. The album also has various tracks with Vibes Maestro Roger Beaujolais and Trumpet player Dave Priseman, who has played on many of our previous projects together.

What was the aim with the album? Just to create some floor fillers or world domination?

MICK: To have fun & make a record that reflected some of our influences. To create energetic tracks that move people physically and mentally.

Do you have any specific influences across the album?

How did the tracks come together and are they all jointly composed by you both?

CB: We had spoken about the vibes we wanted to put together and we wrote a few of the tracks sending rough key parts and rhythm tracks via the web. We had a couple of epic days turning the demos into early versions of the songs as they are now recorded. there are nine Bangs/Talbot joint compositions plus Mick had his solo track ‘ Pic n Micks’ and I penned ‘Blues Walk’ myself. Other than that we reworked the old Marvin Gaye song ‘How Sweet It Is …’ as an instrumental.

Can you envisage some live dates on the horizon?

CB: I’m kind of a studio bod these days and don’t really play much except for some dodgy guitar so we never have played out live together, but you never know, Watch this space!

What have you got planned for the future?

CB: Mick and I are starting out on some new songs for our next album which will be called Gumbo Ya-Ya after the classic soul food dish. So the album’s going to be tasty, spicy and just all round delicious, LOL. There will be a couple of covers but otherwise all Bangs / Talbot originals but with a very strong early ’60s vibe this time.

Finally, what’s on your turntables at present?

CB / MICK: Our new album Back to Business of course !! LOL

The Back To Business album is available on vinyl, CD, digital download and streaming platforms. 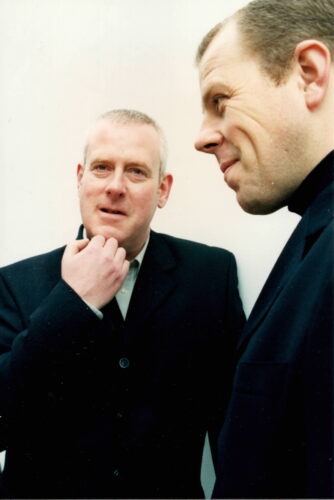 This Feeling Track of the Day: Twin City ‘Only Gonna’ End In Tears’

This Feeling Track of the Day: Velma ‘Suffer’