You’ve got to hand it to F.O.X – they’re true to their roots. And I’m not just talking about maintaining their mass of gravity-defying backcombed hair that near enough grazes the venue’s ceiling tonight; it extends to the fact that, despite a European-wide tour supporting Depeche Mode and slots at SXSW under their belt, they are staying loyal to their Essex origins tonight with a gig at the Colchester Arts Centre. F.O.X fill this church-come-venue from alter to spire with blue and red strobes, 80s synth and full, soaring vocals. Gig-goers replace the congregation and Carlsberg replaces holy water as the audience moves in the would-be aisles and pews that have since made way for a dance floor.

There’s a definite Bowie/Ziggy Stardust or Beyoncé/Sasha Fierce divide between the bold, electro-charged frontwoman we see on stage, Mitzi Fox, and the softer, more endearing woman, Zoe Kent, we find meeting and greeting a host of fans post-gig at F.O.X’s merchandise stand. She happily admits that “Mitzi Fox has attitude that Zoe Kent doesn’t always have the bottle to pull off. She’s like my wilder older sister I guess. She isn’t scared of anyone”. Her self-evaluation proves to be true as a glitter-clad Mitzi takes centre stage and grabs a megaphone which sends rich Siouxsie Sioux-esque vocals echoing through the church. She’s genuinely comfortable on stage, backed by Patrick and Darren, the Banshees to her Siouxsie. Tonight has been about big hair and bigger sound.

In a half-arsed attempt at a social experiment, I spoke to each of F.O.X separately to get their individual takes on all things electropop. Oh, and Lembit Opik. Enjoy.

Who do you believe you can hear in your own music?

Mitzi: I hear a bit of White Lies, Santigold, Florence, Depeche Mode and a lot of poppier 80s acts as I think that’s what I’m influenced by most.

Patrick: Well that’s an easy one! Obviously me, Zoe and Darren. 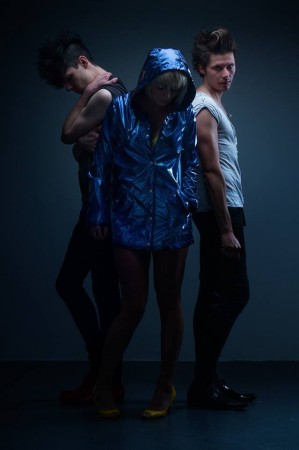 An XFM DJ has described you as “tasty!” What other buzzwords would you like to be used to describe F.O.X?

Patrick: Yes he did – have a lick and you will probably say the same! Well, ‘original’ is always a good start.

Darren: ‘Exciting’, ‘involving’ and ‘energetic’. ‘Unpredictable’ would be nice too.

So, Dave Gahan of Depeche Mode is a champion of F.O.X and The Libertines’ Gary Powell has signed you to his label…BUT did you know that Lembit Opik (yeah, that politician who dated the cheeky girls) has been spotted at a F.O.X gig?

Mitzi: No. No I did not. I did meet him at an awards ceremony and he tried to tell me he could be our manager. I think he gave me his phone number which may have been a ruse for something else. There’s only one of me though so I probably wouldn’t have kept his interest for long.

Patrick: Ha, actually I did know that. Seem to remember him trying to chat up our singer…

Darren: I had heard that. Not our normal audience but nice to know we appeal to different people and walks of life!

What made you decide to release your album Hypoxia in two parts?

Mitzi: We’ve found in the past that we write a batch of songs but by the time the record comes out we’ve been influenced by loads of different stuff. Some of the tracks then feel irrelevant, even if they’re well received. We wanted to get the music out there faster while it was fresh and reflective of where our heads were at.

Patrick: Purely and simply to get music to our fans more quickly and to give us the time to spend on each individual track; a lot of thought goes into every song.

Darren: To make the material available to those who wish to hear it quicker. We go through cycles in our writing – Part II has a very different feel from Part I. The songs were written in blocks and it’s nice that you can hear that but that the two halves still work together.

Why do you think electropop has made such a comeback in the last few years? Do you agree that there’s “a new era of the female electropop star”, as the media has suggested?

Mitzi: I guess I do agree. It’s good to hear different voices coming through – my favourite being Hannah Reid of London Grammar. Totally unique and pure as a bell with hollow depth. So happy a voice like this has had the opportunity to rise to the top. I’m so bored of whiny, tinny female voices.

Patrick: I suppose there are a few female electro pop stars that have come through with the likes of London Grammar and Chvrches which is definitely a good thing. I think [the rise in electropop] may be down to the amount of toys that you can buy at really cheap prices that make anyone sound good.

Darren: I think it’s been a natural development as electronic music has become more accessible to make. We try to combine real instruments and performances with the electronics for a more organic feel. Records completely based on programming can be a little soulless.

If you had to give up music, what would you do to be creative?

Mitzi: I’m actually quite a Grandma. I’ve recently discovered gardening which is really creative but I literally have no idea what I’m doing yet. I murdered several plants in my first week.

Patrick: I think the only reason I would have to give up music is if I lost my ears in which case I’d be creative and make myself new ears. If I lost my hands and feet I’d draw some pictures with a brush in my mouth.

Do you have any pre-show rituals?

Mitzi: If I can get it, a Jägerbomb always puts me in an incredible mood.

Patrick: Not really. I generally feel really tired before gigs (nerves) and think about how I’d like to be able to demand a bed in the dressing room for a pre-show kip.

Mitzi: We want to get back out to America and Europe next year. We’ve had a lot of radio play in Germany this year which we’re hoping to follow up. The second part of Hypoxia will be coming out soon and we have a few festivals planned for the summer then back out touring the new album in its entirety.

Patrick: We just have to finish recording part two of the album, release it, and hit the road again! I think we are planning on heading back to Texas next year for a bit more SXSW action and a few massive burgers up the west coast.

Darren: Finish Hypoxia Part II. It is close, we just need to remain focused on completing it, whilst being relaxed enough to let the artistic side come out. We’re itching to tour after that.

Hailing from South East London, Amy has an eye for the weird and the wonderful in music culture. Although her love lies with the '60s, Amy keeps herself planted in the present by two-stepping at the latest gigs and reviewing the newest singles. Forever getting carried away, expect to hear all about these in extreme detail.

Hailing from South East London, Amy has an eye for the weird and the wonderful in music culture. Although her love lies with the '60s, Amy keeps herself planted in the present by two-stepping at the latest gigs and reviewing the newest singles. Forever getting carried away, expect to hear all about these in extreme detail.
View all posts by Amy Bryant →

INTERVIEW: Rick Buckler talks about his life in The Jam