Following an impressive EP which was released last month, Phoneys & The Freaks are now focused on the next stage of their progression, eyeing up their debut album. I went down to their gig at The Borderline in London yesterday (08.06.14) to have a word with them and see what they were getting up too. Here’s what they had to say:

Afternoon lads, it’s a pleasure to meet both of you.

I just want to start by asking you where did the name ‘Phoneys & The Freaks’ come from?

Bonehead: It’s the name of one of the songs off the EP written by Alex, we’ve got to call it something, you know, it can’t be called ‘Alex and Bonehead’, and you (Alex) just said it didn’t you? I mean, it’s a great title, isn’t it?

It is pretty cool. For yourself though Alex when you first started off you were paying for gigs out of your back pocket…

But going forward how important for you was it to meet Bonehead and forward your own progression as well?

Alex: It was great to have been given this opportunity to write music together. I supported Bonehead’s last band Parlour Flames last year and Bonehead liked what I did. I did a few more dates, got talking and just came up with the idea to write something which came out of nowhere but it’s got to somewhere we are both happy with. Both the way we write and the way we play seems to gel together really well.

B: I don’t think we did it with a view to say “let’s write something together”, I just said to Alex, “Do you fancy coming down to write a few tunes and record?” Not really with a view to approaching record companies and putting it out. But just to write together and see how it goes. But it worked, didn’t it?

B: Not really – I had a project last year with Parlour Flames on Cherry Red Records and Chris (Dolan) phoned me up one day saying, “There is a lad I know from Weston-Super-Mare”. He sent me a link to his YouTube channel, he just said, “Have a listen, see what you think and if you like it is there any chance you can get him out as a support?”. So I did, you know, I clicked on the link and had a listen and I just absolutely loved his voice and that’s how it came about I said,
“Yeah, get in touch with him, tell him to come down and support us.” He did a few gigs for us after that.

Nice one. The EP itself is quite a slow, acoustic thing – is this what you want to take forward for the LP?

B: Nah, I think it’s going to be different, we’re going to purposely record some more up-tempo things, not “rocky” but sort of a bit more guitar driven. I’ve got two on the go that are pretty much that way, Alex has also got a couple. I mean, we aren’t going to do a full album worth of very mid-tempo sort of songs. I think it’s still going to be melodic and harmonious, but with a bit of an edge.

A: Yeah, a good mixture and a more rounded album. 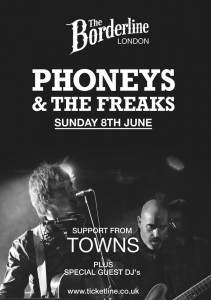 What was it like creating the EP? Was it just a case of getting something down to get recorded so you could get it out there and see what sort of reaction it got?

A: When we started writing we didn’t have a plan to put anything out, it was again just something we were doing because we wanted to do it, and the music spoke for itself really and we put something on SoundCloud and people were buzzing off it.

B: I played early works-in-progress of the songs and I emailed them over to Cherry Red (Records) because I’ve got sort of a working relationship with them, and they absolutely loved it. They were just like, “We want to put this out.” It wasn’t the plan to release something but, you know, they did ask, “what you up to?” and I just said I was recording with Alex and I’ll just send the tracks over.

Cool. You’ve had a lot of praise for his (Alex’s) voice and you’ve also worked with some of the world biggest stars in music, as well as working in arguably the greatest ever rock ‘n’ roll band (Oasis). Do you see any similarities between Alex and the likes of Liam or Noel Gallagher?

B: No not so much with Liam, I mean you could say it’s sort of like chalk and cheese really. Alex is a real singer in the sense of the word. Liam’s a real rock ‘n’ roll frontman – he’ll sort of belt it out you know – loudest voice I’ve ever heard. It’s not the voice it used to be, it’s still a great voice but he’s not as melodic as he used to be, Liam. But they are very different voices, very different characters so I wouldn’t put a comparison on them.

As a young artist starting out, just up the road from here is Denmark Street – there’s talk of it being knocked down. What are your thoughts on that?

A: It’s disgusting. I’ve played at the 12BAR when I first moved to London about five years ago and that was the first port of call really. 12BAR is homing and it’s just the history of the place. It’s always the same in Britain you know, every time there is something historic it always seems to get knocked down, whereas in America it would get protected.

Just quickly before we wrap up – Bonehead in 1995 you did an interview with Liam Gallagher on MTV, you said that most music back then was written, released and then 10 remixes of it were made. What do you think of the current music scene?

B: That was then and this is now. I think it’s a very very different scene. I did that interview 20 years ago and no one had access to the internet or the ease to record for yourself. We inspired a lot of people – a lot of kids to pick up guitars and form a band and as the years progressed along with the internet, it became a lot easier for people to record for themselves. We couldn’t do it that easy in those days. We had to get into a studio and with a big desk that cost money that we didn’t have. Now you’ve got computers and with the right software you can do it yourself. You can get your own YouTube channel, you can get your own SoundCloud account, and you’ve got all this social media. It’s a lot easier and it’s totally different. It’s a healthier scene now, healthier for us and for kids in bedrooms because they can pick up a guitar and get it out there. You don’t have to be on at a record company. It’s very DIY but I think that inspires a lot more people and a lot more bands, whereas back then there weren’t really and we were just sort of the start of that.

That’s really interesting, man and just finally – going back to Phoneys & The Freaks, do you see this as a long term thing or do you intend to go back to doing what you were doing before at Parlour Flames?

B: Nah, I think Parlour Flames was over. Vinny (Perculiar) has got his solo stuff on the go at the moment. It always was just one album with me, I absolutely loved it, you know we were always going to write something together which we did, and we enjoyed it. But as for this project we’ll definitely get an album out, I think it’s got legs you know. I think, potentially, we could put another one out and hopefully we’ll get a bit of recognition, that’s the plan. But I think we’re having a bit of fun, putting an album out and take it from there. If we could get a second album out you know that would be great.

Thanks very much for your time lads, it would be great to catch up in a few months time and see what’s been happening. All the best.

GIGSLUTZ ALL TALK: Which album would you like to see performed in full?