If you were sober enough in mid 1996 you might not have been able to avoid the flurry of fever pitched excitement for Manchester’s Oasis as they headlined their own Spike Island at the vast and lavish lawns of Knebworth, but instead of have a baying sensible crowd of 30,000, times that a few times over to a stupid capacity as far as the eye could see, add a second night (which Liam nearly missed due to forgetting there was a second night and taking excesses to new heights on the first night), throw in a member of The Stone Roses on stage and finally add into the concoction the 25th anniversary in 2021 where we get a new film on the iconic concert plus a fabulously illustrated new book by famed photographer Jill Furmanovsky, who was granted unprecedented access to the band for the press conference, rehearsals and the 2 gig days, here you have a spectacular memoir of the much talked about event of events.

The book in itself is a chunky affair, 288 A5 pages, wrapped in a sturdy hardback casing, as you open the book you immediately take a gasp at a picture of half of the full capacity crowd taken on one of the afternoons of the gigs, at the back of the book the other half of the crowd can be seen, looking like a tidier, clean shaven and probably odorless Woodstock crowd, these are days of innocence and youth as the eager general public wait for their heroes to take the stage. On both days there was a stellar support act including Ocean Colour Scene, The Bootleg Beatles and The Prodigy, some of the support acts are featured in rarely seen pictures of Shaun Ryder of Black Grape (Loch Lomond) sporting a moustache and a short haired John Power from Liverpool’s new upstarts of the time Cast. 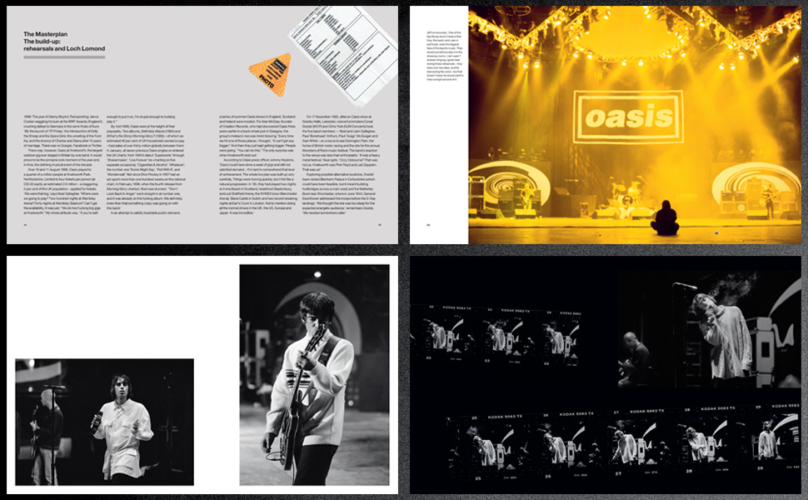 Rehearsals took place at one of the gigantic halls in the NEC Birmingham with the press conference held in the gardens of Knebworth. The band look fresh faced, Ralph Lauren’d up, ready for action, without a care in the world, maybe a touch of confidence, but not arrogance, as they await to play what was the bands biggest gig they have and maybe will ever play in their lives. The band can be seen hugging each other, smiling like the cats who lapped up the cream, best of mates, with the addition of John Squire to the rehearsals Liam looks in awe of his hero, Noel is no doubt as in awe but playing it cool, this whole period was just a visual colourful feast of activity and excitement, the likes of which the world haven’t seen since.

There is a bevy of previously unseen images, some highlights being the band all together, wearing Adidas and all manner of casual splendidness, shot in black and white, smiling ear to ear in rehearsals, looking like a day the Gallagher’s didn’t argue, there are further images of the band in concentration mode from rehearsals all breathing further interest in the build up to those staggering gigs. From the gig there are some wonderfully whimsical shots of all 5 of the band plus additional musicians including brass players and the aforementioned Squire, in various poses probably none more poignant than the shot of a spotlight from mid crowd lighting rig as the dark of night forms around the open air setting, the big white light zooming down on Liam as he sings and growls into the microphone, similar or maybe the same shot might have been seen before, but what is clearly evident is the lack of lights in the actual crowd, this might well be one of the last big events that took place before the invention of mobile phones, a wonderful innocence on this picture is a brief look back to a simpler way of life.

There are additional bits of rare and previously unseen memorabilia plus accounts of the events from the photographer, plus notably from Creation Records label owner, the man who spotted Oasis in a pub a few years before this life changing event, Alan McGee and lastly the person who wrote all the songs that thousands of voices sang across Knebworth Noel Gallagher further narration comes in the form of celebrated author Daniel Rachel. The book is a significant celebration of this legendary night, leaving you in no doubt that the concerts are the stuff of legend that will stay forever embedded in rock and roll greatness.

This Feeling Track of the Day: Stone ‘Let’s Dance To The Real Thing’

This Feeling Track of the Day: Cavalcade ‘Feels Like Home’