Manchester’s Spinningfields, the upmarket side of town, home to Emporio Armani, Hugo Boss and just for tonight the wonderful delights of Little Comets and Thumpers.  Disaronno Terrace have set up their ultimate summer party at The Oast House with live music, art and most importantly – cocktails. The Oast House is an award winning restaurant and bar right in the centre of Manchester’s Spinningfields with a large open area with benches for food and drink and tonight a small stage. It’s a beautiful if not slightly chilly evening, the most you can expect from summer up north, and we settle down with our complimentary Disaronno Sour cocktails.

First on the bill tonight is the glorious alt-pop duo Thumpers. Marcus Pepperell and Jack Hamson Jr. take to the stage with their drum heavy, excitable beats. They’re joined by 3 additional band members to add to their already super sound, somehow fitting onto the tiny stage set up in the middle of Spinningfields.

At this point in the evening, it seems the Manchester punters are just finishing their first drink, content to have a chat and pay little attention to what’s on stage. After their first song, drummer Jack Hamson Jr. attempts to lighten their mood “Let’s try and make this as not weird as possible yeah?” which doesn’t get much response. However, as soon as Thumpers start up ‘Sound of Screams’ I can see the crowd’s attention drawn to the stage. It’s an instant hook, the beat grabs you. Your ears prick up to hear what’s coming next and luckily for us it’s 3 and a half minutes of masterful pop goodness. Thumpers top off their set with the energetic ‘Galore’ and ‘Unkinder (A Tougher Love)’ and with several more cheers and claps than before, they just might have some new fans after tonight. 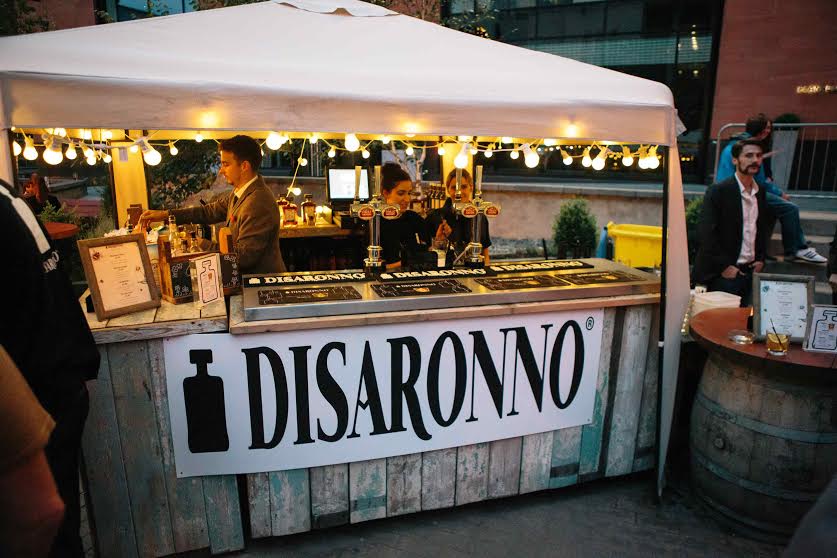 It’s getting darker now and after a slight scare when I had a sip of cocktail with egg in it, of which I’m allergic, I’m feeling better and ready to see the wondrous Little Comets – somehow for the 3rd time this month?! The guys played amazing sets at X&Y and Truck festival, so I’m expecting great things. Little Comets are 3 lovely guys from Newcastle who create superb melodies and sounds with their lilting guitars and percussion. This added to the astounding lyrics sung by Rob Coles makes Little Comets, for me, one of the best bands around right now.

The crowd get some more drinks in as the band do their own sound check and set up the stage and soon they’re ready to come on. It’s getting later and people are drunker, so there’s a keen crowd up front ready to hear the sounds of Little Comets. The band begin with the first track from their latest album ‘A Little Opus’, a jaunty track about the overwhelming amount of white, middle class, state school educated males in parliament. Despite its more serious topic, it still gets the crowd bopping and moving. I think this is Little Comets’ expertise and charm, authentic and original music that makes you think, but also dance. It’s a winning combination. The band continue with fan favourites including ‘Jennifer’, ‘Worry’ and ‘Dancing Song’ and end with ‘In Blue Music We Trust’ which Rob tells the crowd is “really important to us”. A slow and melancholic song to relax the nerves with a huge climax at the end, sort of represents the night for me – it’s been a good one.