Twisted Wheel took over underground gig/dance club, Gorilla, in Manchester for an overflowing night of hedonism and sweet sounds on Saturday October 20 2018.

It’s ten years since Twisted Wheel were originally signed to Sony, and 2019 will mark a decade since their eponymous album became the soundtrack to UK northern life.  This year however, has been the Wheel’s biggest for an age.  Within the ten months of 2018, frontman Jonny Brown has reassembled his broken wheel, kickstarted a sold-out grass-roots UK tour, recorded an EP which peaked at Number One in the physical charts, played UK festivals and supported Liam Gallagher before yet again being left with two spokes and a flat tyre.

Jonny, as his wont, found a musician he loved earlier in the week and gave him an early slot prior to another indie punk band, All The King’s Men.  The band are one of Manchester’s lauded punk bands. Their set is tight, melodic, riff-driven. The tone is set with strident chords, belting bridges and a crowd more than ready to celebrate everything great about songs from the gut.

Following All The King’s Men, hyper DJ Dave Sweetmore announced: ‘Manchester, the boys are on! Twisted Wheel are back in town. They’re on the way.’  Twisted Wheel jump into ‘Lucy The Castle’ upon entering the stage.  No introduction is required as they are thrust into the roar of tattooed millennials and stoic Stone Island-waring blokes. 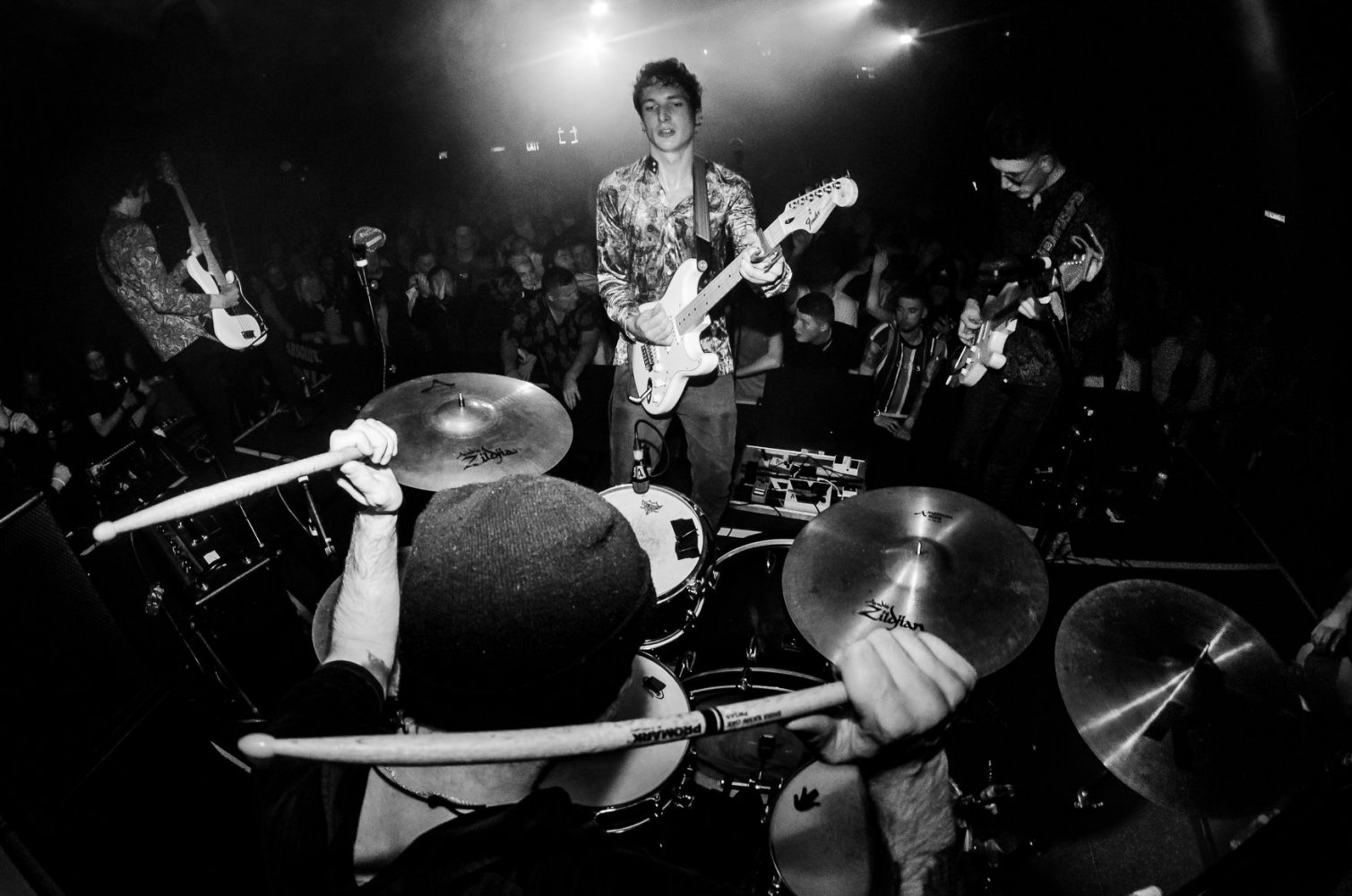 ‘One Night on the Street’ found lyrics being thrown back by bodies on shoulders, while ‘Rebel’ – the premier track from the Jonny Guitar EP – conducts an exhalation of bliss.  Jonny’s voice showed more flexibility and painfully expressive emotion than years gone by.  The crowd became a swell of naked torsos as the reverb echoed.

‘Strife’ is the anthem of northern life. Jonny no longer sings the lyrics, and at Gorilla, he did not even cut in until ‘potato peeler’.  Fervour increased during the course of ‘Strife’, proving the archaic tracks are not getting old, just more significant.  Drenched in sweat, the boys rolled into ‘Keep It Up Boy’, followed by pre-first album track ‘Merry Go Round’.  Here, with the staccato bridge, thundering drums and intricate structure, we glimpsed the Twisted Wheel frontman as a master writer who’s song architecture is crafted for maximum, emotive effect.

A conversation of passion, ‘Ride’ proceeds the riotous and irreverent rebel-shout of ‘You Stole The Sun’.  The song causes a two-man-deep, ten-foot wall of torsos on shoulders, ankles in the air, phones on the floor and a pile on of countless bodies.  Word-for-word-repeated, this song is not just in the brain of any Manc’, but in the blood.  With its cataclysmic flourish, a deafening chant of ‘Bouncing Bomb’ immediately greets Twisted Wheel, prompting Jonny to pick up an acoustic. The track finds Jonny at his most beautiful, full of bittersweet sadness and that rebel rage: Manchester is the home of bouncing bombs, resistance and remembrance.

Despite a plethora of guitar-tech issues plaguing the set, Jonny Brown has proved he can make Twisted Wheel whatever he likes but the songs’ independent lives are proving him to be its folk hero.  In synch, robust and real, rocking northern grit and once again, Jonny’s at the wheel.