People queuing up outside the 100 Club tonight should consider themselves lucky. Not only were the tickets they won to the gig tonight free but they’re to see three of Britain’s most exciting acts at the moment. 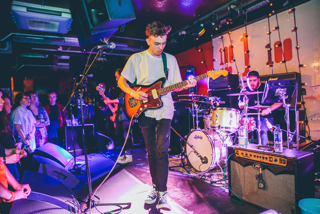 Baggy t-shirted Jaws, are a chilled opener to the night with their B-Town surf-pop. The band plays tracks from last year’s Milkshake EP, ‘Stay In’ being a highlight, and the band also take the opportunity to play several songs from their new album. The set ends on single ‘Gold’ and this is where Jaws come together best: jangly riffs and effortlessly simple lyrics wrapped up in a swaying, head-shaking package . 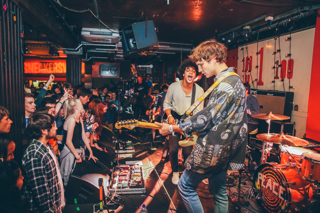 Childhood, whilst not a massive leap in style from Jaws, are next on and the ones who really get the night going. Set opener ‘Blue Velvet’ instantly puts the crowd into some hearty jumping and the band keep the momentum going with material from new LP Lacuna. Childhood’s sound in a live setting takes on a far more energetic feel than the record and the band do an excellent job of warming up for the night’s headliners.

Not that Peace need any warming up for. The lights dim as four figures come onstage to raucous applause, frontman, Harry Koisser, wearing what appears to be a dressing gown and putting a twist on the Converse-sponsored gig’s apparent rule that all band members must wear the brand’s trainers by wearing Converse on one foot and one of his own shoes on the other. 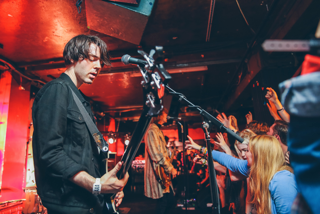 The band start their performance with a rare treat: euphoric, climaxing ’1998’ opens the set as the crowd heaves towards the stage. In Love’s ‘Bloodshake’ and ‘Toxic’ are up next, followed by new single ‘Money’. The setlist is a well-crafted combination of old and new and the crowd’s mood only moves up and up with each song. It’s only a matter of time before people are trying to get on stage and one fan makes a valiant attempt in front of the crowd at re-creating the music video’s dance during ‘Lost on Me’ whilst another jumps up to give a hug to a bewildered Koisser.

“We haven’t played this in a very long time” – the introduction to ‘Scumbag’, a track which gets more of a reaction than most bands could hope for on any of their songs, let alone a rare b-side. Peace’s set is without lows and by the time the finale of ‘Float Forever’ is reached the audience can no longer contain themselves and a full-on stage invasion occurs as guitarist Doug Castle jumps into the arms of the crowd.

Whilst not in huge amounts, there has been a fair deal of criticism over Peace’s new, groovier style, especially from fans of their earlier, darker work. Yet tonight they’ve proved any doubters wrong: funky baselines and rapping similar to Blondie’s ‘Rapture’ only seek to complement the band’s playful interaction with fans. Peace haven’t even given a release date for their second album yet but they’ve already mastered the perfect combo: tons of good music, tons of personality and a ton of fun. 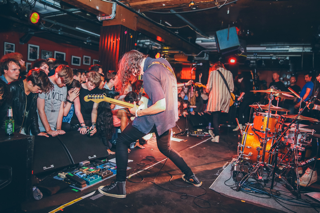 I'm James and I'm from Essex although I like to pretend I live in London. You'll find me listening to music and playing guitar to a poor standard.

I'm James and I'm from Essex although I like to pretend I live in London. You'll find me listening to music and playing guitar to a poor standard.
View all posts by James Mulholland →