The legendary Spike Island gathering held at Widnes, Cheshire on May 27th 1990 featuring a bevy of DJ’s in support of, at the time, world dominating headliners The Stone Roses, has been spoken of time and time again sometimes in hallowed terms as one of the greatest gigs ever, with others reporting the sound wasn’t up to scratch, footage that has appeared of the gig would suggest the former was the correct summation of the day, with a wall to wall bouncing crowd as the band played their tunes for a new generation.

Pictures that were taken on the day range from blissed out revellers all Madchester’d up in Joe Bloggs gear whilst on stage the band showed their cool moves and shapes whilst dressed in Roby Sasson. A new fanzine type booklet produced by Hanging Around Books entitled Where Angels Play featuring previously unseen pictures from the press conference and the big day by acclaimed photographer Andy Phillips show off some stunning new angles and images off all the band plus crowd shots. 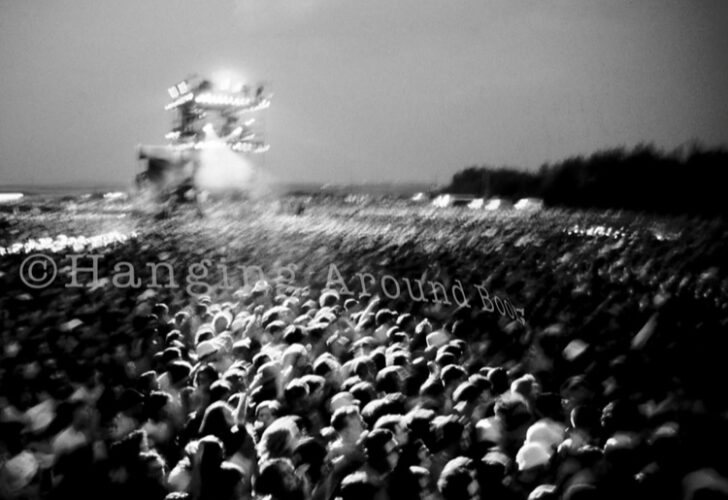 A crowd shots depicts happy smiling punters smiling for the camera as Andy was situated on what sounds like a precarious ledge situated stage right, when The Stone Roses took to the stage the likes of Shaun Ryder and Bez joined the photographers making the make shift photo pit even more unstable. Another fab shot of the crowd shows the vast 30,000 in attendance, with an ever so slightly misty eyed effect, the time it was taken was just as the sun was going down, faded sky in the background with a spot light showing the tops of the heads of the crowd with packed crowd mist rising from the hoards as they are squeezed together. Stunning.

Pictures of the Roses are just as stunning. Crystal clear with bags of attention to detail including Cressa in the background of a few of the shots showing off his best moves in his pristine white Russell Athletic sweatshirt. The best of the bunch is the centre fold double page spread of Reni on a drum riser. Sat behind his jazz influenced kit, the one with a set of bongos attached, Reni hat in place as he’s singing into the microphone. There’s a sound engineer just below where he’s playing keeping a keen eye on the beatmaster which just adds something special to the pic. Reni, the vastly underrated drumming king, will we ever see him on stage again? Who knows, but with a picture like this to revive and prolong his status as an iconic drummer not only in action but in picture too, this only makes the heart long to see him up on stage once more.

To say this is only 36 pages in total, there seems to be so much more, quite simply your eyes will be entertained from the first page to the last. With a foreword by Andy and a limited edition print of 250, you’d better get your skates on to secure one of these devilishly stylish bad boys.

Where Angels Play can be purchased via the following link

The Best Little Known Gig Venues in the Country