“Four stages. Four crews. Four sounds. One champion” is the tagline for Red Bull’s huge upcoming event ‘Red Bull Culture Clash’. If you haven’t heard about it, where have you been? Adverts have been plastered up all over the UK and even London buses have been covered in marketing for the Earls Court event!

A sound clash is defined as a musical competition where crew members from opposing sound systems pit their skills against each other. Founded in Jamaica and usually featuring reggae, dancehall or jungle music, the object of the clash is for the crew to beat or “kill” their competitors. No records can be played twice unless it’s a special ‘counteraction’ version. Red Bull said about the event,

“Originally hosted in London in 2010, the Red Bull Culture Clash has grown into a series of battles that have now become a staple on the international sound clash scene. With previous contestants like Major Lazer, Soul II Soul, and Magnetic Man, as well as special surprise guests including Pusha T, the legendary Johnny Osbourne and Usher, Culture Clash is more than just one of the fiercest musical battles around. It’s a celebration of sound system culture and its ongoing influence on hip hop, dancehall and dance music. It’s a rare get-together of different genres and generations and it’s probably the most entertainment you could cram into a four-hour show.” 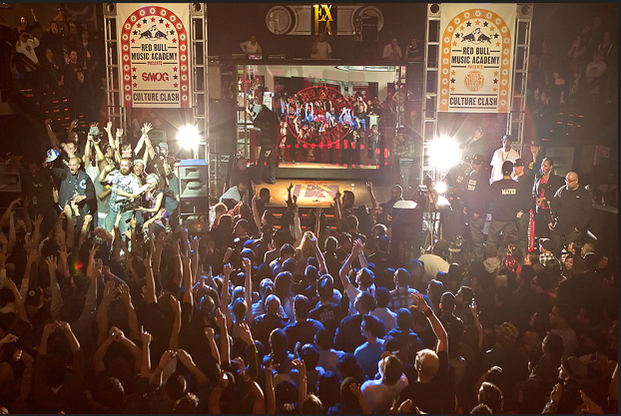 The clash is split into four rounds and works as follows:

10 minutes per crew Time to check your levels, mics, watches and selection – clash is coming! DJs take the temperature of the crowd and then turn it up a notch.

15 minutes per crew. DJs play any style, and crews are judged purely on tune selection. Knowledge is king.

Round 3: Sleeping With The Enemy:

10 minutes per crew. Crews twist it, playing an opponent’s style of music. Big test. The mighty may fall.

8 minutes per crew. Clashing crews play their biggest anthems – one for one. Each crew draws one tune, then rotates to the next. This is the final round, so double points and double daring!

Taking to the stage this year as part of the 2014 clash will be A$AP Mob, Stone Love, Rebel Sound and reigning champions Boy Better Know. To give you an idea of what each crew brings to the table, we’ve put together  a little insight into their sound and included some videos below, so have a read/watch and let us know your predictions on who will triumph on 30th October!

A US hip hop group who formed in Harlem in 2007, A$AP Mob are the only American entrants in this years culture clash and so have the pride of their nation in their hands. They are a group of rappers, producers, directors and fashion designers who have dominated the East Coast rap scene over the last few years, mainly thanks to the success of their superstar figurehead, A$AP Rocky. With the majority of the crew using the A$AP moniker, which stands for Always Strive And Prosper, it can get a little difficult when trying to remember everyone’s names, so I’ll do my best not to confuse you!

A$AP Rocky is the man from the crew who has taken all the headlines, due to his critically acclaimed 2012 debut album Long. Live. A$AP which included features from Drake, Skrillex and Kendrick Lamar. Not to be outdone however, another member, A$AP Ferg released his 2013 debut album Trap Lord which spawned two huge hits, ‘Work’ and ‘Shabba’. With these two and a whole host of other members of their crew, could this be the year that hip hop takes home the culture clash crown?

Founded back in 1973 by Winston ‘Wee Pow’ Powell, Stone Love were one of Jamaica’s most popular sound systems. Known for having superior sound quality compared to rival systems, Stone Love have managed to maintain their huge reputation right up to today and so with decades of sound clash experience under their belts, they have to be considered strong contenders to take the 2014 Red Bull Culture Clash crown.

Renowned for cutting exclusive dubplates and establishing artists such as Beenie Man, Wayne Wonder, Buju Banton and Shabba Ranks, Stone Love are easily the most experienced dubplate selectors in the contest. Having supported so many artists over the years, they are sure to bring some very special guests along with them; will the masters teach the new kids on the block how it’s done? We can’t wait to find out!

Featuring an eclectic mix of musical talents from across several genres, Rebel Sound is the most diverse crew in the clash this year. With jungle pioneer Shy FX, legendary reggae selector David Rodigan and electronic music superstars Chase and Status and their MC Rage all part of the Rebel Sound team, will this diverse mix of sounds be able to come together in order to crush their opposition and take the title?

Chase and Status have become renowned for their huge live sets over the last few years, having played around the world at numerous festivals, but can they combine their live performance experience with Rodigan’s expansive knowledge of reggae and urban music as a whole in order to be crowned champions? Will Chase and Status collaborator Tempa T turn his back on the grime scene and join Rebel Sound on stage for ‘Hypest Hype’ or will he be the thorn in their side and team up with Boy Better Know to work against his good friends? Make sure you watch the clash in order to find out first hand!

BBK are the reigning Red Bull Culture Clash champions having lifted the trophy at the previous event in 2012. Currently holding the title of the biggest grime crew in the scene, the majority of their members have had huge solo success and when on stage together make a formidable team, which makes it easy to see why they are the current holders. Having gone to Jamaica to learn more about sound system culture in their Jamaica Better know video, which you can view here, they are sure to use what they found out to good effect in order to fight off their rivals.

JME, Wiley, Skepta, Frisco and Jammer are just a handful of the MCs that you can expect to see on stage at the clash and with DJ Maximum as their selector, you know the tunes will be on point and the dubplates will be huge. Having recently launched the sixth edition of his Lord Of The Mics DVD, which we have covered extensively on Gigslutz, Jammer has got a wealth of experience when it comes to clashing and with the godfather of grime, Wiley on their side to team up with the rest of the crew plus the numerous members of grime’s royalty who are sure to pass through their set, BBK are in a great position to defend their title and are my prediction to win the competition again.

Tickets for the event have sold out but the lovely people at Red Bull have kindly decided to stream the event live from Earls Court, so you can watch all the action from the comfort of your own home. To stream the live event just click here and by the magic of the internet you’ll be transported straight to London with the best seat in the house!

We’d love to hear who you think will triumph in the clash this year and whether you think BBK can do the double. Let us know all your thoughts and comments on Twitter via @Gigslutz_ and on Facebook.