The Arctics and friends take over Dublin's Marley Park, but it isn't Alex Turner who steals the show.
Rating:

A dull afternoon, and the only thing more anticipated than the arrival of the Arctic Monkeys is the arrival of heavy rain to Dublin’s Marlay Park. But what better way to brighten up the day than the emergence of Brighton duo Royal Blood? If someone told you that a band was composed of simply Bass, Drums and Vocals then you would start to ask yourself, well… would that be enough? Surely there’s something missing? NO! I was so, so wrong. The combination of powerful Rage Against The Machine-like riffs, with lead singer Mike Kerr’s raw vocals intertwined and topped off with drum beats that even Keith Moon on ketamine couldn’t keep up with, was a lethal cocktail of sheer power that sparked an electrifying (to say the least) atmosphere that was set to stay for the day. The response that they received from the crowd was unbelievable considering that their debut album hasn’t even been released yet. 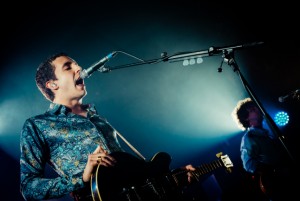 Miles Kane followed up Royal Blood’s short yet triumphant set, the standards had been set and the bar was very high, very high indeed. But Miles is never one to disappoint, and struts out looking as cool as ever before bursting into crowd favourite ‘Inhaler’. He is definitely one of the few artists who puts in 110% every time you see him. There is never an absence of passion when you see Miles, and this is why his connection with the crowd is so compelling; it’s how he can rile up a crowd of thousands by the end of the first song. The energy he gives off is contagious. He went on to sing an unexpected ‘First Of My Kind’ (from the EP of the same name, released in 2012) as well as other crowd favourites: ‘Don’t Forget Who You Are’, ‘Kingcrawler’ and ‘Telepathy’. What really stood out for me was ‘Give Up’, which had snippets of the Rolling Stones’ ‘Sympathy for the devil’ incorporated into it. In fact, it was so good that Miles himself, even took a step back mid-solo to scan the crowd before glancing to drummer Jay Sharrock and mouthing “AW fucking hell man!” through the biggest grin I have ever seen. He had the crowd in the palm of his hand – at this point the arrival of the Arctic Monkeys just feels like a distant memory. It’s small moments like this that make you question how Miles isn’t headlining his own shows as big as this, he is definitely more than capable of doing so.

As the day rolled on the bar was raised higher and higher, and was at its peak when Jake Bugg took to the stage at Marlay Park. Now, he doesn’t ever really have much to say… Actually, I think all that we got was, “Hello Marlay Park” and, “Cheers, you’ve been great”, but despite that, Jake was without a doubt the highlight of the day and managed to single handily upstage the Arctic Monkeys. It’s incredible when you consider how far he’s come in just three years – he’ll be taking over the world before long, and he’ll do it without uttering more than a “cheers” here and there. 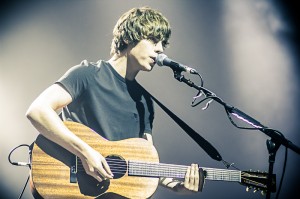 The 20 year old bursts into ‘There’s A Beast And Wall Feed It” to kick start his prodigious  fourteen song set, followed up by ‘Messed Up Kids’ and  a very mellow ‘Me And You’, all of which can be found on his most recent album, Shangri La. The crowd was getting surprisingly rowdy for what was simply a young boy singing country songs in jeans and t-shirt, strumming away on his small acoustic guitar, but that’s the beauty of Bugg – the way he creates such an invigorating atmosphere whilst being so simplistic is incredible. The set had a surprisingly intimate feel to it, I say surprising due to the fact that Marlay Park is a HUGE venue. Although it may have felt like Jake’s local pub compared to his mammoth slot in Glastonbury just a few weeks prior, this intimate feel was defiantly created by the laid back approach that Jake takes to his performances … He’s just so relaxed. Either that or he’s extremely good at playing it cool. The highlight of Bugg’s set for me was definitely ‘King Pin’, where he traded in the small acoustic guitar for a Fender Telecaster and a bit of distortion. The crowd had well and truly lost it. On turning around, all you could see was a sea of thousands jumping and flailing around to a song that is almost a complete contrast to the majority of his other songs, especially the ones on the first album. His transition from purely country to a combination of country with a huge dash of Rock ‘n’ Roll is now in full swing, and he is looking and sounding better than ever.

Yet another highlight of this set was the mesmerising ‘Ballad Of Mr Jones’ from Bugg’s debut album. The tantalising intro echoed through Marlay Park, hanging heavily over the heads of the crowd, before being brought back down to earth when combined with the rough, textured tone of Jake’s outstanding vocals. The dreaded close of this fabulous set was in sight, and it could only be done with the song that Jake is probably best known for… ‘Lightning Bolt’. Another quick change back to the old acoustic guitar saw the crowd sing along to every word of Bugg’s country anthem, before the shy 20 year old mumbled a very shy, hesitant “cheers” before exiting the stage swiftly, leaving everyone craving more. 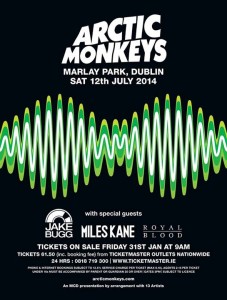 Finally, it was time for the most anticipated act of the day. The crowd grew restless after waiting in the rain for their beloved Monkeys for over an hour. I wasn’t holding out much hope after such a disappointing show in Cardiff last year but it’s fair to say that the Arctic Monkeys definitely redeemed themselves and exceeded all expectations. It’s the first time in a while that I have seen any kind of personality in their live performances. They definitely played up to the occasion and it was nice to finally see the bond that had been lacking, between them, and to actually see them act like a band, minus the usual, cheesy, scripted howl of “LAAAAAAAAAAAAAAAAAAAAADIEEEEEEEEEEEEEESSSSSSSSSSSS!” from front man Alex Turner.

Despite performing older, heavier, riffier tracks that really got the crowd going, like: ‘Brianstorm’, ‘Don’t Sit Down Cause’ I’ve Moved Your Chair”, “Library Pictures” and “I Bet You Look Good On The Dance floor” parts between these glimmers of the old monkeys were bland, due to the fact that the remainder of the set was dominated by tracks from their most recent album AM; It was clear that this was to please the majority of the first two rows who were only there to listen to ‘Do I Wanna Know?’. This was short lived, which was unfortunate for the pining Arctic Monkeys fan girls, most of which were lifted over the barrier, weeping, by security by the time that the first verse of the mighty ‘Brainstorm’ was over, which was, without a doubt, the song of their set. Turner, Helders, O’Malley and Cook, all perfectly synced, were on fire and the response that they received from the crowd was astounding. It was as if the crowd had been surged and that buzz lasted for the remainder of the set, everyone was pumped and raring to go! 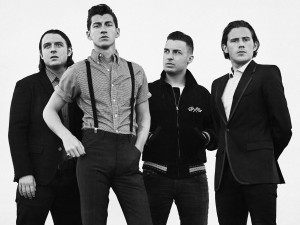 Alex Turner returned to the stage alone, accompanied by nothing but an acoustic guitar to start the encore following a prolonged chant from thousands of adoring fans, screaming “ONE MORE TUNE! ONE MORE TUNE!” at the top of their lungs. Turner’s performance of ‘A Certain Romance’ from their debut album Whatever People Say I Am That’s What I’m Not” brought everyone back down to earth and was enough to evoke emotion from within the most brutal of mosh pits. It really was captivating. It was nice – almost nostalgic – to see Alex Turner down off his pedestal, just simply strumming away on an acoustic guitar as thousands fixated on him admirably. For a moment, you could see past all of the hair gel and the leather jackets – you could see the softer side, the old Alex, the great mind that has got the band where they are today. To hear a song like this one, stripped back to its simplest form so that you can really listen and hang off every word, reminds you that Alex Turner really is one of the greatest lyricists of this generation. It was nice to see a glimpse of the real, shy Alex Turner, and  it’s comforting to know that he is still there somewhere underneath the leather and his newly inflated ego. But best of all, it was nice to see a glimmer in his eye as he glanced out over the crowd and just took it all in for a moment.

LISTEN: Cold War Kids share new single ‘All This Could Be Yours’