The second instalment of our Creamfields 2018 coverage, following on from Friday’s blistering set of live shows.  The Saturday of the festival seen several stand-out performances from Annie Mac, Major Lazor and Giggs.

“Creamfields, how you feeling?” Shouts the Holland-born Nicki Romero as a rush of fans storm towards the ARC stage. Announced as the festivals special Saturday guest, Romero, along with many others (Timmy Trumpet,  Galantis) made an appearance. Stagewise, the ARC stage had a strikingly similar setup to the Sicboy stage, forcing a genuine ongoing, yo-yo effect trying to differentiate between the two stages.

Opting for flirtatious summer tracks, Romero set a joyful Ibizan summer vibe with buoyant mixes, fizzing drops and strings of confetti. Chopping up The Chemical Brothers classic, ‘Hey Boy, Hey Girl,’ the Dutch DJ merged popular tracks with lively beats. Adding Florence and The Machine’s heartfelt ballad, ‘You’ve got The Love,’ to the set, Romero said, “Creamfields if you’ve got the love today put your hands in the air,” before dashing into Beyonce’s, ‘Sweet Dreams’. 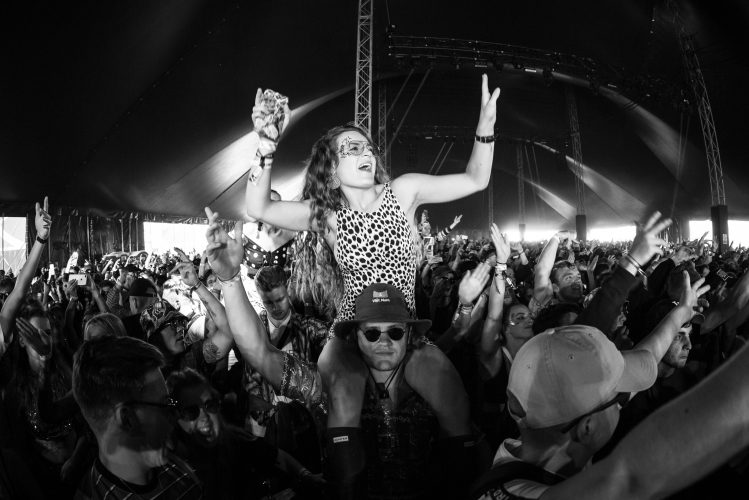 Relying heavily on tropical house to make waves were South London dons, Disciples. The group themselves have stapled themselves a noble spot within the music industry with acclaimed tracks, ‘ How Deep is Your Love,’ ‘On My Mind,’ and, ‘They Don’t Know.’ All in which were thrown into the mix of their live performance at the Horizon stage.

Mixing and blending lucid remixes, Disciples played a poetically nonchalant set accompanied by Hawaiian -themed stage productions and trance-like drops. With an audience mixed between standing and seated, it is fair to say their afternoon set was a lovely addition to the weekend and kicked off at the point in which the festival saw sunshine for the only point of the weekend. The calming warmth of the sun-rays corresponded elegantly with the trio’s mix of tropical house.

Bursting onto the stage with a swoon of vibrant pop art, showers of fireworks and mechanic vocals, Radio One DJ Annie Mac rocks onto Horizon.  Surrounded by a concoction of eye-catching stage holograms, Mac put on a blistering set of idiosyncratic-pop tunes meshed with glitched electronica. “So Creamfields, we got sunshine,” says Mac before moving into some PC drub vibes. Looping disco house complemented with streaks of blazing drum and bass; it is fair to say Mac was the dictionary definition of eclectic at Creamfields 2018. Showcasing a range of genres, the trusted DJ was a nice follow up from the previous act and followed on the theme of tropical house.

Whilst the last two sets brought us summer bops, the Saturday evening main act, Major Lazer left an unforgettable taste in mouths. Walking alongside the beat of hard hitting bass synths, firecrackers and a collection of dancing cheerleaders, Major Lazer strolled onto the stage to a roar of cheers. With an overexcited audience, and some blinding stage lights, Major Lazer kicked off their set with some rhythmic r&b tunes blended into some disruptive wobbles of bass.

This set was by far the highlight of the night. It is clear that the group had a perfect vision for this show, and they executed it just right – from the booming speakers to the blistering flames that shot out from the stage to the energetic cheerleaders that slew every spec of space. Ironically, beams of blue and green lasers lit the stage alive and was one out of the many added extras that made this performance. Ending with a litter of confetti, fireworks and blistering lasers, Major Lazer were definitely one of the biggest highlights of the weekend.

Also on Saturday night, Camelphat threw some psychedelic wonders, with their dissonant synths and piercing drops in the Steel Yard tent. Camelphat, having dropped their first single via Vice Records in 2008, has since shot to even more fame with their recent hit, ‘Cola,’ ft Elderbrook.

Concluding our Saturday night at Creamfields 2018 was the noble grime artist Giggs, who kicked up a fuss at the Horizon stage.  Slamming in his 2015 hit ‘Man Don’t Care,’ taken from his Integrity album, the boisterous youth’s bounced in their matching tracksuits and gun fingers ready for action.

Also playing the infectious, ‘Lock Doh,’ Giggs adds, “let’s take it back to some old-school Giggs.” The sound of a disc jockey being re-winded scratches loudly, before the DJ spins into Giggs classic, ‘Look What The Cat Dragged In.’ A track which initially brought the British rapper to fame.

*PREMIERE* This Feeling Track of the Day : Hands Off Gretel ‘Kiss Me Girl’