After making your way through the grimy rooms of Corporation and up some winding stair cases, you finally stumble into The Wytches dressing room which is loaded with pizza boxes and beers immediately after their sold out show in Sheffield.  A fiery live performance to say the least, The Wytches are still riding the wave from their debut album Annabel Dream Reader, which infuses grunge rock with some surf-psych splurges.

After meeting up with singer/songwriter Kristian Bell, bassist Daniel Rumsey, drummer Gianni Honey and new organist Mark at their instore session at Dr. Martins earlier that evening, we finally got the chance to sit down with the band after their messy show.

Tonight’s been a little different, the show was part of Dr. Martins Stand For Something Tour and there was also the instore beforehand, how have you found it?

Kristian: We felt like there was a bit of hostility going on for some reason…but it was all fine. We kind of really fucked up the instore because we figured we’d want to do it electric, but it kind of didn’t turn out right. But that was all washed away in the end tonight. I did see an instore online of Trash Talk and everyone was going wild and smashing CD’s and shit. 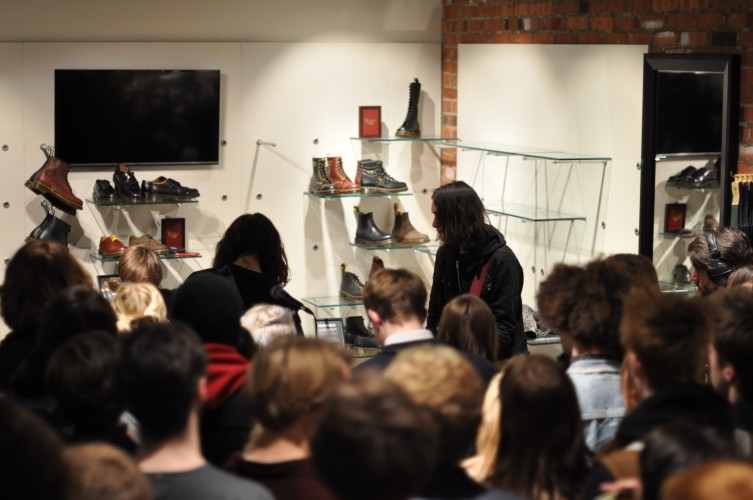 On your current tour you’re playing with some great bands, did you get much say as to who you got to tour with?

Daniel: We did yeah, we all picked a band each and sort of split them over all the dates. We got bands that we individually liked and also jointly liked, so like Baby In Vein and Traams as well.

Kristian: We’ve got Vulgarians playing too, so we’ll go back out on tour and we have those playing and Baby in Veins. Baby In Veins obviously like completely know what they’re doing, they’re proper shredders. They haven’t played a bad show on the whole thing, and they’re really good. Vulgarians are as well, I was really happy to watch them live.

Kristian: Yeah its weird because I definitely think that Vulgarians have some really good songs. They messaged me ages ago asking what I thought of their music and I thought it was great straight away. It was like some free recording that they got to do, and there was lots of feedback and screaming and I thought that was really cool. They weren’t trying to be anything.

You’re playing live a fair bit now, how do you find this compared to the recording side of things?

Kristian: I prefer the recording side to it, but there’s always limited time in the studio and once you’re out you always think, well there was ten million things we could have done differently and you’re really kicking yourself for it. Whereas live, you just get into it.

Do you feel as though you have to bring that wild stage presence and create havoc?

Kristian: Gianni is really up for that but It doesn’t bother me either way. Sometimes when they’re just watching I like that, but when everyone’s going wild it makes you go wild as well. We like to jump around and everything but that’s not for the intention of everyone else jumping around. Sometime we might just be really stag, if we’re in a bad mood.

What’s been some of your stand out live shows?

Mark: I liked hull. It was funny because everyone’s kind of heard of Hull and you always get this kind of – Oh, we’re playing fucking Hull – and if you look at the venue on Google it’s like this dilapidated old pub. But when you get in there the people are great and literally everyone in the crowd was going insane, I even saw some older people going for it as well. They don’t give a shit in fucking Hull, it’s great. 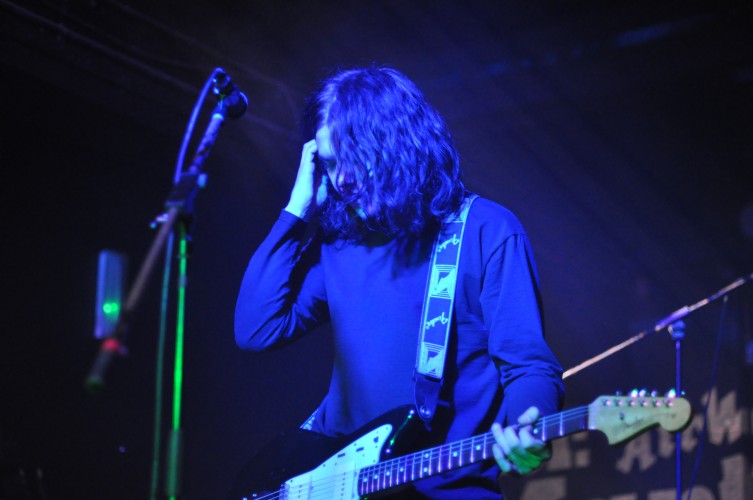 Daniel: They’ve always just been well up for it. It’s the same as Hull really, everyone just really loves music.

Mark: In northern cities all the people you meet are just really funny, do you notice that? They could all be comedians.

Kristian: We’re from the midlands me and mark, well from Peterborough. And I reckon that we definitely feel as though we have more in common with northern people. They’re not scared of  stupid humour or embarrassing themselves or anything like that. Vulgarians, and I know I keep fucking bumming those guys, but they’re really easy to get along with because they’re all funny and really nice.

Mark: I don’t know whether this is a thing, but down south it seems like there’s a lot of trying going on whereas up north everyone’s just like, I don’t give a fuck.

When it comes to song writing how do you usually go about that process?

Mark: I found that when the best recordings come out…well when we re-record songs like three times in a row we start getting agitated that we aren’t getting the right sounds because we already think we’ve got the sound of the track. The best thing is when you write something new that night and just go for it. You know you haven’t got any expectations, it’s the first time you record it, so that’s how it is. If you re-recorded something from the first album it would just be confusing, whether it’s better or worse you wouldn’t know. The new stuff, that’s what’s great.

So, it was last year you released your debut album Annabel Dream Reader, Do you have another album on the way?

Daniel: We have, we’ve recorded like ten songs already. We went in with the intention of doing the album and finishing it, but since we’ve had everything back it’s kind of like we want to do more. There’s a couple of tracks that we weren’t happy with so we’re going to go back in and do some more in December, just so we put something out that we’re really happy with not just half happy with.

Kristian: It’s quite a lot different, because I was only like nineteen when we did the first one (album) and for some reason my voice was…well I don’t think it dropped properly (Laughs). So my voice is a bit lower now, it seems to get lower and lower all the time.

Daniel: We did a lot of experimenting with sounds and pedals and stuff.

Kristian: We used a lot of ring modulation (effects pedal).

Mark: Recently I’ve had a piano in my house, well like for the last four or five years, so I’ve been picking up that. My main instrument is guitar really, but the organs fun I bought the one I’m playing now for about seven hundred squids and yeah I’ve just been picking that up really. I mean I really haven’t sat myself down and properly taught myself that instrument yet, I still look at it every night and think this is really confusing. But yeah The Wytches don’t need two guitars right now, we’ve done it in the past and it does work but for this tour, it seemed like the right thing to do. We’ve got a new organ we might as well play around with it. 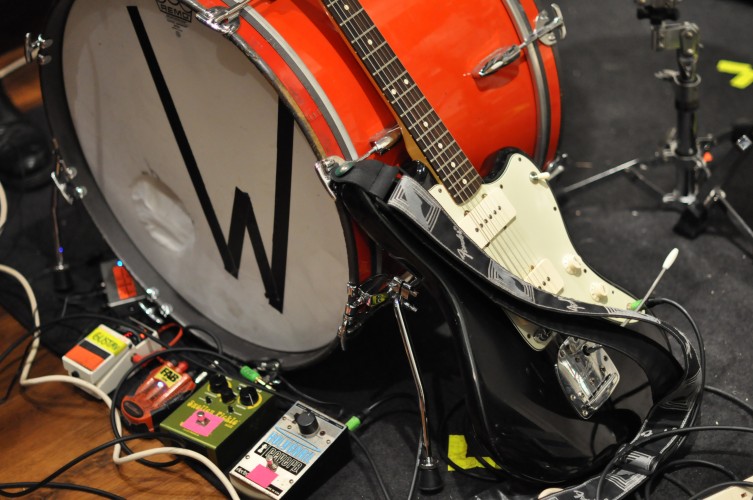 And how about lyrically, what’s this album about?

Kristian: This is sort of less ambitious, more understandable.

(Drummer Gianni walks in and grabs a bottle of whisky. “He’s taking the whisky. For fucks sake.”)

I guess as it stands, because we’re still going to finish more, this is more straight forward. I feel like you maybe alienate some people with weird lyrics, so this album is kind of just more standard. It’s not like the main thing I do now is writing lyrics or anything, at that time it was just because I was new to it. With the first album they were all set and they all meant something  to me, I knew exactly what was going on. But this time, honestly, it was a bit like oh shit I’ve got to write this down now. I’ve got to do that now. It was less thought out. Well no, before it was less thought out. Whilst the songs were there and the structure and everything, when we were practicing and mumbling off half of the lyrics there were only some I wanted to use. I spent like a week before recording them making them into proper lyrics, but overall its less like dreamy or whatever.

Kristian: Yeah that’s it, less fancy. I feel like I was just trying to be a bit fancy before.

Mark: It’s like Harry Nilsson and The Beatles they always try keep it simple, and It’s always the best lyrics. Obviously there are like great lyricists like Morrissey if you want to throw that out there, but the straight forward lyrics are always great. The Beatles have never been faulted for it so.

Kristian: They have a lot of crazy ones as well.

Kristian: What’s that one? ‘Happiness is a Warm Gun’, all the lyrics on that are like mad time. And not just the chorus either, but the verses and stuff  all have like crazy lyrics in them. It just shows that with stuff like that, sometimes people really don’t have to have a clue what your sometimes on abut to make it interesting, but I just kind of lost that at the moment.

Have there been any memorable moments for you since the release of Annabel Dream Reader?

Krisitan: Yeah really recently without sounding lame or anything but when we had Mark for the first time, which was at the Leeds show. I mean Marks played live with us loads of times but normally with just silly songs that we both know on guitar, or anything that we can pull out with mark being there for the sake of just…

Mark: Getting me on tour…

Kristian: So the Leeds show we had rehearsed for like a week previously, just me and Mark on our own. The show was great because Mark played six songs out of the set, so that was like a really memorable time. We haven’t properly toured in ages and ages, not properly since last year where it’s not just support shows.

And what’s it been like making that step up from supporting slots?

Kristian: It’s different, you have to kind of like put on a show rather than just play some tunes and get off before the main band.

Daniel: When you’re a support act you can sort of hide from that responsibility, it’s nice that you can just do it and go. But with this you have to step it up.

Kristian: If the music is good, that means that we’re happy and our hearts are in the right places at least.