“What kind of creature bore you
Was is some kind of bat
They can’t find a good word for you,
but I can…
TWAT.”

Rapid-fire delivery and satirical performance poetry uniquely defines John Cooper Clarke like no other punk. The bard of Salford may be 67 and have experienced his fair share of a rock ‘n’ roll lifestyle, but even so, he still continues to hit the road, packing venues and theatres across the country. Now attracting younger audiences, it seems that Clarke’s refined blend of comedy and poetry aren’t the only reason for his resurge in fame.

You’re performing in Lincoln tonight John, what do you make of the city?

Lincoln itself is built up around it’s University, how do you find it connecting with younger audiences?

It’s great, I mean it’s really easy for me now because of all the groundwork that Alex Turner and the boys have done for me around the world you know. In fact getting onto the GCSE syllabus fifteen years ago did me a lot of good, it introduced me to a whole new generation of fans. It’s really fantastic, there is no typical Johnny Clarke fan now, it’s all ages. A lot of entertainers say, ‘oh its people from six to sixty’, I mean I wouldn’t say six, but certainly sixteen to the mid-seventies, that’s my audience.  All kinds of people worldwide, that’s my audience.

You mentioned Alex Turner and the boys. On the Arctic Monkeys latest album AM they covered ‘I Wanna Be Yours’…

They certainly did and a great cover of it, fabulous.  It should have been done like that in the first place. They converted a valentine poem into a heartfelt love ballad by not doing very much, a little bridge there and a chorus there, and then, vuala! Fantastic, great job of it.

Have you ever been tempted by that musical element when performing live?

No, not really I’ve done it a couple of times at some gigs in Europe and various times but really what I’m generally known for, is solo poetry performances. That involves a lot of gags and riffs if you know what I mean, I don’t want to put people off. It’s me and two other poets Mike Gary from Manchester and Luke Wright from Suffolk, we’re all very good in our respective fields. 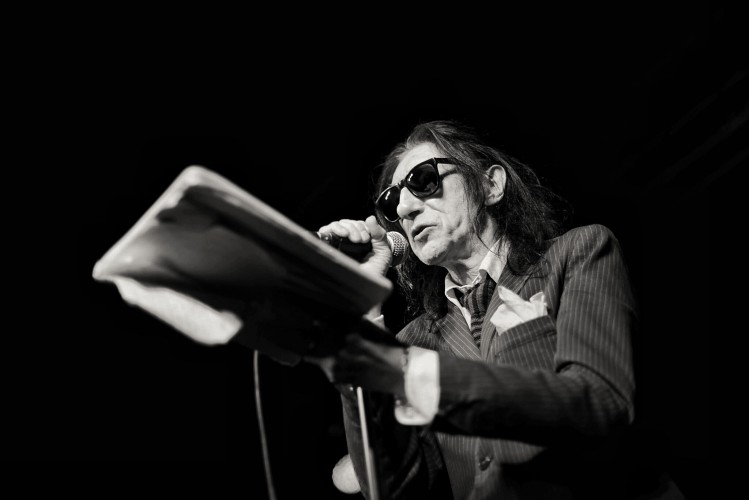 How do you find touring now and how’s it different from when you were perhaps younger?

Well in some ways it’s harder, but in other ways it’s easier. I’ve got a whole firm around me now, I’ve got a driver so its door to door travel and I’ve got people looking after me, so in a lot of ways it’s much easier than it used to be.  And necessarily so, as you so rightly pointed out… I’m much older now.

So whilst you’re out on tour what’s your biggest extravagance?

I guess my biggest expense apart from hotels generally, would be tea time. I only really eat breakfast and tea, so In about three quarters of an hour I’ll be going to some top dollar restaurant. You might say it’s an extravagance but you’ve gotta eat and I ain’t gonna go self-catering at my time of life (laughs).

Nah, no you’ve got to watch it, my body’s a temple (Laughs).

I know you have a very distinct sense of style as well ,so are clothes up there as maybe another extravagance of sorts?

To be honest, I’m very careful with clothes. I would say that I’m a careful dresser generally, so the clothes that I allow myself to wear are not always available. I’ve got clothes that I’ve had for years, I just look after them, get them cleaned regularly and get the buttons sewn on, so it’s not really an extravagance no. To be honest I’ve got a lot of friends in the tailoring, or in the rag trade generally, who are always happy to supply me with certain items, especially if I give them a mention. The more you get the less you need, it’s one of the great injustices of capitalist society I’m afraid.

I mean you go back to The Beatles, I’m sure they struggled for years with crap equipment. But, as soon as they kind of got to number one, Vox were giving them amplifiers and Rickenbacker were giving them guitars. So you get the money and then you don’t even have to spend it. It’s like I say, don’t go looking for justice in the capitalist world (Laughs), saying that though, what other choice is there, what else have we got?

With your sense of style and your appearance you’ve even been compared to the likes of The Rolling Stones, Ron Wood…

That’s very kind of you, I like the way Ron looks…

Have you ever been mistaken for him in the street?

Oh, all the time. Before the recent resurge of my fame overtime, if anyone asked for my autograph on the street I would always say, maybe I’m not who you think I am. To be honest, eight times out of ten they were all fans of mine, but quite often it was, ‘are you Ron Wood?’ I remember one time in Dublin, I was having my tea in the hotel restaurant and there was this Norwegian family on the next table. When I went outside for a cigarette, this guy followed me out and I could see that he really thought that I was Ron Wood. He had this accent and was like, ‘I really love your work’ I’m not sure I can do that accent very well but he was like ‘I’m really a big fan of your work’, and I couldn’t face the disappointment on his face if I told him who I really was. So, that was kind of the one time I went along with it. I kind of became Ron Wood for ten minutes. I said ‘Thanks man’ and all that. 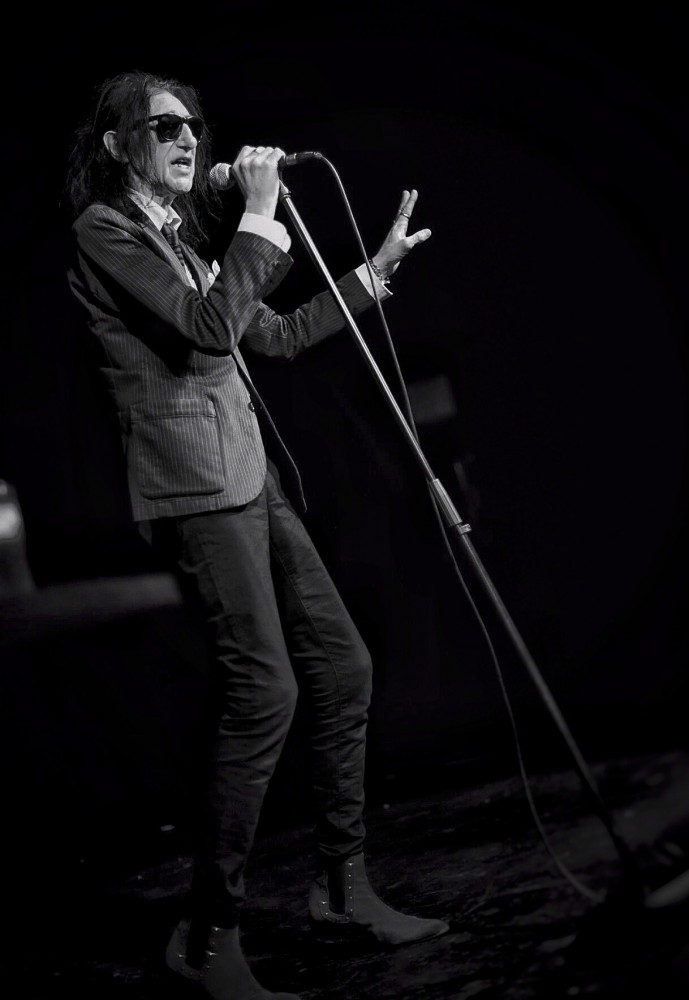 Do you reckon the guy was convinced?

Yeah totally, he went back there with a real smile on his face. So he’s gonna go back to Norway and tell them he’s had the crack with The Rolling Stones. I can’t destroy somebody’s happiness to that degree just on the strength of my ego, that would be cruel.

Have you and Ron ever crossed paths?

I finally met Ron actually eighteen months ago at the NME awards, we were both given trophies for you know, being swell guys. Services to rock ‘n’ roll and society in general, something like that. When we finally ran into each other we got a picture taken, he says ‘here we are. The book ends’. So somebody must have pointed it out to Ron that, well, you know. He was really sensational Ron, a terrific guy. I says to him, ‘listen I’ve got the missus out front, do us a favour would you stand on the opposite side of the missus, I wanna get a picture of me and you with the missus in the middle giving it the old shrug, like you know which is which.’

(Laughs) I doubt that, somehow I doubt it. In an ideal universe maybe… but we’ve got the picture me and the missus and we’re ideally gonna frame it some time. Ron was really obliging, he says ‘oh yeah you’ve got to keep the little women happy’. He says ‘if we get separated we’re on table three, me and Sally’ that’s his new wife, who is gorgeous by the way. What a lovely couple, Ron and Sally, they were totally obliging about it.

Now, when you’re writing poetry where do you gain your inspiration from?

Oh crikey, I dunno. I just check into the office at ten in the morning and leave it at five o’clock and hopefully I’ve got some stuff to show for it at the end of the day. I don’t really rely on inspiration, I think inspirations for amateurs. When you’re making a living out of poetry you’ve just got to put the hours in, I don’t really know how to tell you what the process is, it’s different all the time. Sometimes you struggle with things all day and then you write something that’s really easy, and it couldn’t be better. Sometimes the best stuff is the stuff that’s easiest to write, but you can’t rely on that any more than you would rely on inspiration.

Do you ever find that ideas just come to you during a live performance? On the spot.

Oh yeah plenty of times. In fact, no two shows are entirely identical, I’m tellin ya. There’s always stuff at every show that’s peculiar to that night, it makes it worth doing really. Well, it’s worth doing anyway on account that that’s how I earn my living, let’s not get sentimental. But every night is different…sometimes not in a good way.

Have you had any recent, not so good nights?

Well I had one a few months ago. I did a show in Bath which is my kind of jinxed town for some reason, I think they’ve got too much money or something. But anyway some old broad asked for her money back, I don’t know what was a matter with me. I was just getting over pneumonia, so I was on medication that kind of impinged on my thought process shall I say. Prescription stuff, It impinged on my though processes and I really had no recollection of that night at all. I know it wasn’t like any other gig, but one women, or old broad as I said, accused me of being on Cocaine. I heard all about it. She went to the cash desk and asked for her ticket money to be returned because, ‘that mans on Cocaine’ (Laughs). Anyway she was the only one who complained and she got her money back, so no quibble.

So what sort of material can people expect to hear on this tour?

I’ve got loads of new stuff, I’ve got one at the moment called ‘PC Gone Mad’

Could you give us a quick preview?

yeah, it’s not what you think it’s about and to give you an idea here’s one of the verses.

“He was a regular third galahad

To the orphan kids he was a stand in dad

He ain’t so bad

So as you can hear it’s about a copper that’s gone off the rails.

I like the sound of it already. Anyway you’re on tonight so I don’t want to strain your vocals too much…

As we say in show business, don’t leave the fight in the gym… I’ll leave you with that one Jacob

Thanks John, enjoy it tonight.

Ey Jacob, if I wanted to enjoy it, I’d buy a ticket. I’m going to work (laughs).