If you have visited on line forums and social media site since the advent of the internet you would have no doubt seen a plethora of pictures shared by fans, many capturing your favourite musician on stage, throwing shapes whilst eager fans can be seen forever young, spritely lapping up the showpiece, all capturing different visual dynamics than a professional photographers best efforts. Since Paul Weller split from The Style Council in 1989, the Paul Weller Movement being his first solo vehicle before venturing into the rock antics of the past 30 odd years as a definite solo artist, many of his fans have been there all along the way, taking still shots from all quarters of the venues he has played.

Whilst it has been nice to see these pictures on line a physical document has been crying out to be created to cement many of these images like they have never been presented before. That is until now, with the attentive eye of Jon Abnett being the driving force behind a creatively brilliant new book entitled From The Floorboards Up published by This Day In Music books. There is a straightforward book priced at a very respectable £39.99 a special edition of the book priced £75 has a bevy of mouthwatering extra’s including; 2 replica concert tickets, VIP lanyard pass, 2 Paul Weller setlists, Paul Weller poster, 4 exclusive postcard photos, PWM Ltd edition enamel key fob and a numbered certificate of authenticity.

The book has been painstakingly researched, at the start of each chunky chapter a detailed account of the Modfathers decades as a solo artist has been thoroughly examined. From playing small clubs and releasing at the time panned original material, we see Weller trying to find his mojo again after years of playing bigger venues and have adoring audiences lap up his material he found himself seeing the whites of his audiences eyes and the music press shouting down his name, thankfully we see his fire really didn’t go out as the story goes on to tell through his constant never say die vision to create forever evolving material for his audience, the Woking Wonder went on to pack out echoing arenas and stadiums once again with widely acclaimed material the signal for journalist and fans to fall over themselves trying to get a piece of the action. 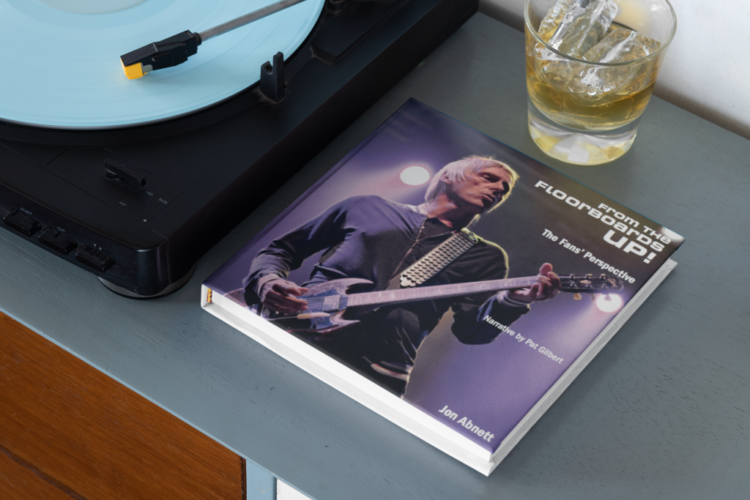 Also included are scanned in ticket stubs, rarely seen posters, set lists and tour lanyards from all over the globe helping to illuminate the way, however the pictures are the main delight here. One stand out trait of Weller is the clothes and hair. Whether it the early 90’s with his short mod feathered haircut, Duffer of St George being the name every cool cat was wearing. Mid 90’ saw his well known longer mod Steve Marriott influenced cut make a welcome return with either a shirt or t shirt making an appearance at the start of the set by the end of the set the top half of the Modfather was drenched in sweat, topless, whilst he no doubt was enjoying the grind and groove of his band.

Late 90’s and going through the 00’s there are less topless shots but a lot more changing appearances. His brown locks gradually disappear for a more mature grey look no doubt inherited from his Father’s silver streaks. Various significant venues pop up recalling different poignant moments of Wellers career. Kilburn National Ballroom 91 with that distinctive solo album white floral shirt look, Cambridge Corn Exchange 93 with a fab mid page psychedelic pic, some great shots from Milton Keynes 95 show Weller in what might be a lush Ben Sherman shirt. There’s some mint shots from his appearance at The Brits when he ripped up for the place with his version of From The Flootboards Up; Irving Plaza, New York 2007 was another significant gig with a 3 night stint at the venue playing The Jam, The Style Council and Solo material in each set on individual nights.

Yet more visual delights included in the final chapter covering 10’s up to 2019 includes a fleeting glimpse of The Jam bass player Bruce Foxton on stage at a homecoming charity gig in Woking, Steve Brookes also makes a welcome appearance, the well-worn but loved 100 Club gets a look in from his appearance in 2012 and 2013 the latter appearance from an impromptu support slot with The Moons, foreword transcriber Roger Daltrey takes centre stage from one of the forestry gigs in Tunbridge Wells 2016 before some stunning shots from the Royal Festival Hall appearance which turned out as the basis for the scintillating live album Other Aspects from 2019, Weller dazzles in a fresh lemon jumper, smart loafers and love beads.

With some parting words from support bands including Stone Foundation, a great shot of Weller at the front of the barrier gleefully lapping up their music is here, The Rifles, The Dogs, The Strypes, plus front of house sound engineer Mr Jones and long time guitar technician Roger Nowell, the man who has the inevitable task of tuning Weller’s guitars before each show, not something for the faint hearted, these final words are a surefire final treat amongst all the great content in the mammoth 420 pages. A splendid photographic feast for all followers of Paul Weller.

This Feeling Track of the Day: Supersoakerr ‘Afterlife’