Ronnie tonight hinted to Gigslutz that he could be set to play an intimate show back in familiar territory over the next few weeks.

The Ronnie Wood Band (not that band) have been confirmed to close the 2013 BluesFest on 1st November with a tribute to Jimmy Reed at The Royal Albert Hall.

It now appears Ronnie is lining up a warm up show on his West London home turf. At a private event in Barcelona this evening Gigslutz’ own David Ham got chatting to the legend himself.

Whilst chewing the fat over their favourite London small venues Mr Ham brought up The Half Moon in Putney. Ronnie’s response to this was

So there you have it. Keep your eyes peeled for that one. For more information about BluesFest please click here and to get tickets click here

Ronnie said about the BlesFest show “Jimmy Reed was one of the premier influences on the Rolling Stones and all the bands that love American blues from that era until the present day. It is my honour to have the opportunity to celebrate his life and legacy with this tribute.” 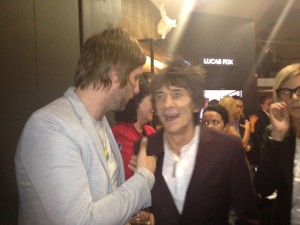