Having never been to a gig at Delamere Forest, I wasn’t too sure what to expect. I’ve been to the forest before, it being quite close to my hometown of Sandbach, but after an incident with a parking ticket (touchy subject) I hadn’t been back.

On a Sunday in rare British 25 degree heat the first thing I noticed was the huge variety of people; rowdy groups of lads, older people with deckchairs and enough camping equipment for a whole weekend at a festival and families with kids in tiny Stone Roses t-shirts.

The venue itself was impressive. The stage was set up at the bottom of a hill creating an amphitheatre effect. The hillstretching upwards was perfect for sitting on with a section at the bottom for the more energetic of us, meaning nearlywherever you are in the venue, you get a good view.

First on was John Ainsworth, an acoustic singer songwriter based in Manchester. His opening set was perfect for the weather; dreamy, folk inspired tunes played on a 12 string guitar and sounding like a huskier Jeff Buckley with guitar riffs akin to folk legend John Martyn.

Next support was Velveteen Saints, a change of tempo from Ainsworth. With catchy melodic tunes, this Glaswegian band could be compared with the Vaccines. The band was also joined on stage by special guest Jonny Brown (of Twisted Wheel) after playing with them on Friday at ABC in Glasgow. After recently quickly building up a fan base on Twitter and securing festival dates over the summer, the Velveteen Saints’ party songs really drew in a crowd.

Scotland’s second offering of the night sent a surge of energy through the crowd. As frontman of The View, Kyle Falconer pointed out (in his amazingly thick Scottish accent); a lot of the front of the crowd were Glasgow based fans, understandably proud of the Scottish contribution to tonight’s gig. Dropping in a couple of classics from their debut album, including ‘Same Jeans’, and chucking in plenty of newer album tracks, they created a proper sing along atmosphere, even amongst the people sipping wine from plastic glasses at the back.

Between The View and The Charlatans I ventured to the toilets and noticed people desperate to get in over the back fence, climbing up trees and trying to outsmart security who lined the fences. To no avail. There were crowds sitting on thehills behind the fences, all credit to the loyal fan base The Charlatans have built up over the years.

As I was listening an argument behind me about the queue for the toilets driving people to wee up the fence, the beginning of ‘Forever’ was echoing through the field; the queue seemed to forget about their bladder issue and break in to a very northern pose, arms in the air, leaning back, singing along to the intro.

Back on the grass the sun was setting and The Charlatans settled into a fairly uninterrupted set. Burgess is still captivating as a front man, occasionally sitting down in frontof the drums, handing the limelight over to the rest of the band (or checking Twitter!). Although there are thousands of people still paying to see them, and more risking a run in with security to try to, there is still a sense of humility and modesty among the band.

The band mixed in a few early classics from ‘Up To Our Hips’ (1994), including ‘Jesus Hairdo’ and ‘Can’t Get Out Of Bed’, all still sounding fresh and current, 19 years on from their release. 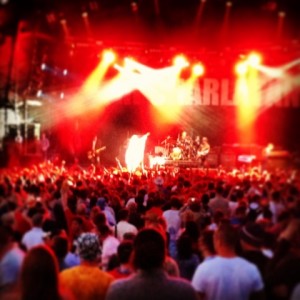 The crowd went mad for trademark track ‘The Only One I Know’, and ‘North Country Boy’ sparked a mass sing-along. ‘One To Another’ from 1997 album ‘Tellin’ Stories’, which is also the name of Tim’s autobiography released last year, was an exercise in nostalgia; you can tell on the faces of the older people in the crowd that this was their youth and on the faces of younger people that this is their youth.

They ploughed through their hour and a half long set, the atmosphere in the crowd one of genuine appreciation. Some who had been going all day were face down on the grass but still managing a foot tap, everyone else dancing and singing.

There were very few words spoken throughout the set , but theunbelievable encore of ‘Sproston Green’ brought a dedicationfrom Tim to drummer John Brookes, thanking Pete Salisbury for stepping in and sending quite a poignant message to hospitalised Brookes to get well.

So lack of toilets, dad dancing and car park queues aside, the diverse crowd and the atmosphere they created are testament to The Charlatans’ timeless classics, and Tim’s endless dedication to his fans

T IN THE PARK – Saturday Review