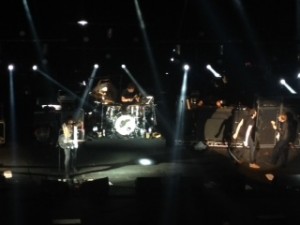 Another surprising warm up for their debut Reading and Leeds headline shows; Kasabian played a semi intimate one off show at Brixton Academy. Talk of Kasabian recently had centred around failures to conquer America and disappointing sales of their latest album Velociraptor. However this show proved that they are still arguably the best major live act around today and worthy of headlining the big festivals.

Friend of Gigslutz and fellow Leicester lad Kav (check out his Gigslutz interview further down the page) opened up the night’s festivities with his band ‘The Blaggers’. For those who have not discovered Kav’s stuff yet, get on it. They are a proper rock n roll outfit, no messing about. Check out their gig at Notting Hill Arts Centre 19th September if you can…

Band of Skulls then warmed the place up further before the main act appeared. Walking on to the Beatles’ ‘Sometimes’, they start with ‘Days are Forgotten’ then straight into ‘Shoot the Runner’. Tom was on fine form whipping the crowd up into a frenzy. Even mic problems during Underdog didn’t put him off as he nabbed Serge’s without missing a beat.

The end of ‘Where Did All The Love Go’ then morphed into a psychedelic jam of ‘Swarfiga’ whilst Tom disappeared from the stage for a few minutes, only to return and blast out the theme from E.T. I wasn’t expecting that.

After rattling through ‘I.D’, Serge then took centre stage for ‘Take Aim’ and a surprising cover of the Korgis’ moody classic ‘Everybody’s Got To Learn Sometimes’. I wasn’t really into it, but on the form they were in they could’ve done a cover of ‘Bob The Builder’ and it would’ve sounded epic.

Another  surprising cover was belted out in the form of ‘Praise You’ by Fat Boy Slim which morphed into ‘LSF’ as the pre encore set closer. Instead of the usual “more” chants; the crowd kept singing the loop from ‘LSF’ until they returned on stage. Which sounded quality it has to be said.

The encore consisted of stormers ‘Switchblade Smiles’, ‘Vlad the Impaler’, which saw Tom doing some monkey impressions, bizarrely, and set closer ‘Fire’ ending with Tom serenading us to the Beatles’ ‘She Loves You’.

Overall it was a superb gig, they were in great form, full of energy. They were ‘Empire’, some might say.

Those off to Reading & Leeds are in for a treat.