Gary Numan took to Manchester’s Stoller Hall for the first of his In Conversation gigs: ‘A Night of Talk, Questions and Answers’ on January 15, 2019. 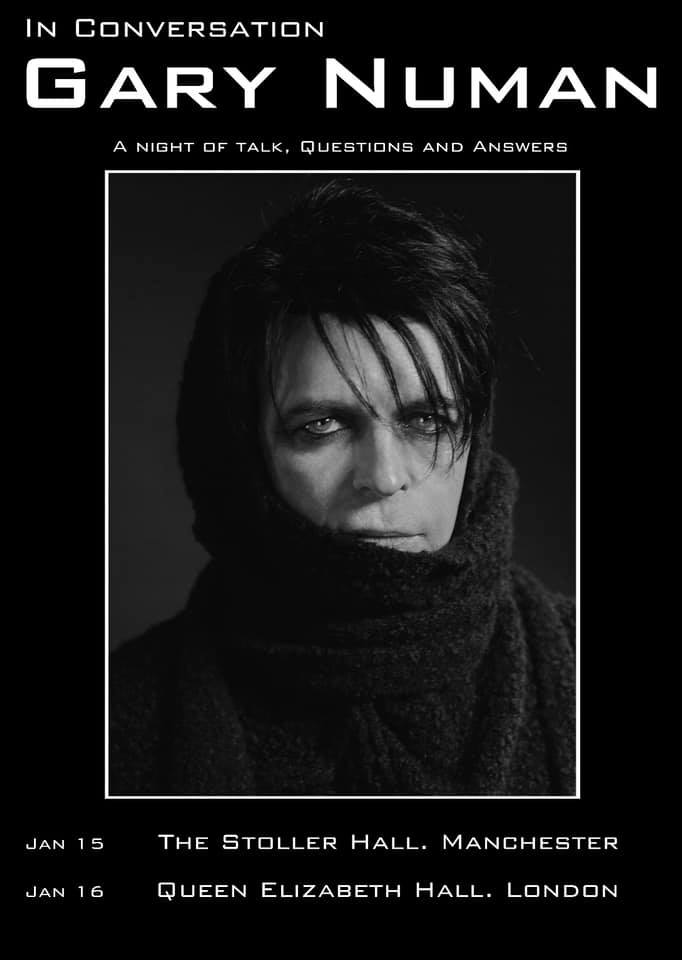 With revenue becoming increasingly elusive, artists are finding themselves turning to unorthodox means of earning their living. If an artist predates the internet, then navigating the music industry’s new business model can be tricky – or, if they are business smart – lucrative.

One prevalent method of compensating from dwindling record sales is the ‘chat show’ format. It is low-maintenance and cheap to tour, making it in a no-brainer for any artist with enough star status to attract a crowd. Tonight, it is Gary Numan – a bonafide pioneer in his field – who sits in the interviewee’s chair.

Billed ‘In Conversation with Gary Newman’, the interview was held at Stoller Hall in Manchester.  The venue itself was small but stately, befitting of the upmarket impression the entire event was attempting to create.

Yet séance nor sermon this was not. When Numan appeared on stage, the crowd erupted into chants of “Numan! Numan!”.  The Numanoids were out in full voice.

The interview began by addressing the few curios which sparsely adorned the stage. A metallic blue jumpsuit, worn by Newman during his infamous Wembley “retirement” gig; a worn-out Gibson bass which the icon wrote ‘Cars’ on; a ragged Mad Max-style bodysuit, the outfit in the ‘I am Ruin’ music video; and more.  From the cursory manner in which these iconic relics were addressed, it was apparent that they were exclusively ornamental.

With occasional, curt replies and swift fact corrections, Numan seemed tense and uneasy when talking about his musical past.  However, when topics unrelated to his career cropped up, only then did Newman truly seem comfortable.

With authority, Numan talked how his Aspergers allowed him to compartmentalise the ugly sides of fame, helping him to cope with the ensuing pressures.  He detailed how he had cried when he discovered his latest album, Savage, had reached number two in the charts.

His naked honesty made it a distinctly authentic and human story. The album was his highest charting since the 80s (when he was at the peak of his powers).  To him, the tears were of relief; vindication and validation. Music had been his entire life and for decades, he had watched it slip away. He had gone from pioneer to the peripheries.

In magical moments like these, Numan exuded subtle yet magnetic charisma. That said, it was unfortunate that these moments were scant throughout the course of the night. Numan had the tendency to indulge on nervy, rambling tangents.

During what should have been a death-defying anecdote regarding an aeroplane crash, Newman instead embarked on a ten-minute maunder about the finer details of aerobatics. Oftentimes, the ‘Conversation’ felt unfocused.  This messy edge to the evening was mirrored by the interviewer himself, who seen himself becoming a spectator to the evening, instead of the circus master.

Yet, the audience hung upon every word. From the laughter at the mildest of Numan’s jokes, to the genuine, heart-wrenching sympathetic groans when Numan became visibly distressed discussing his wife’s miscarriage; it was evident that the crowd were diehard fans.  Even when the man was discussing which kitchen appliance has the best instruction manual, the Numanoids were rapt.

It did not matter to them that they have not learned anything about the music itself.  To be in the presence of its creator, discussing the prosaic and esoteric, was enough for the price of admission itself.

View all posts by Sam Morrison →