M.I.A rocks Glastonbury with awesome power in a way only she can. The real Queen of Glastonbury.
Rating:

Glastonbury has come and gone for another year. As ever it’s proved untouchable as the greatest music festival in the world. So many special people, so many brilliant performers – all in one massive field, covered in mud and smiling. From dance tents at 8am to heavy metal headliners, the whole festival was once again a wonderful experience. There will no doubt be 170,000 festival goers around the country now nursing post festival comedowns and reflecting on the many highlights and performances of the weekend.

For me, the one performance that stood head and shoulders above any other was that of the head twistingly good M.I.A. This woman is something else. She’s on a different planet to any other artist around today and – on Friday night – she delivered something breathtaking. Something as good as I’ve ever seen live before. 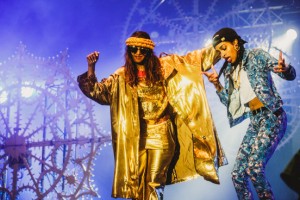 Looking back through musical history there are many amazing performers and musicians who cannot be copied. Off the top of my head I’m thinking Prince, The Stone Roses, New Order, The Clash… Bands and artistes who have a sound and presence that only they can do,  that can’t ever be replicated. Yes, they all have influences, but they have turned them into something completely new and something other wannabes will never be able to replicate. Add M.I.A. to that list.

She may never sell as many records as them, but she deserves to be acknowledged in the same breath when considering the genius of a unique songwriter and musician. And, on Friday night at 10.30pm on The West Holts stage at Glastonbury, this was confirmed for me.

Walking on stage in a gold cape to the Rocky theme tune, her and her entourage –  ‘The Party Squad’ –  throw a load of foam glow sticks into the crowd, creating a great visual impression and adding to the vibes. Then launching straight into ‘Bucky Done Gun’, the tone was set for the night with relentless energy.

Following the high energy of ‘Bird Flu’, M.I.A. spoke to the crowd for the first and last time by lambasting the BBC for banning her set due to the political messages supporting Tamil immigrants on her dancers’ t-shirts. She said: “This is a political announcement, the BBC have banned M.I.A. at Glastonbury. It’s because of these t-shirts that say ‘Stop Tamil Deportation’. But we don’t give a fuck and you know why? We are going to do the best fucking show tonight and it ain’t gonna be on TV. I’m here, you’re here and that’s all we fucking care about. Hashtag freedom, motherfucker.” Whoever gave our Mathangi Arulpragasam that information actually got it wrong, as the set was indeed being streamed live. Regardless, it demonstrated her punk “do not give a fuck” attitude that has landed her in hot water on more than a few occasions.

Her attitude can border on tipping over the edge, but she can pull it off and becomes endearing because of it. She’s got that special something which only few can get away with. Many can try, many can fail. Look at the legion of Liam Gallagher imposters at your next night out in town; they all try to copy the attitude but ultimately just look like a bunch of dicks. M.I.A‘s attitude isn’t something she has construed or gimmicked – her anger and her passion about what she believes in is apparent in her music, which is taken to another level because of it. It’s real, she means it and she’s all the better for it.

The set continues at a chaotic, frantic pace as she rattles through tracks from all four albums. Every track in itself is a highlight and all are performed without a band on stage, just a DJ and a selection of dancers and backing singers/rappers who seem to come on and off stage at will. The fact that there is no band further illustrates her ability to mesmerise the crowd with her presence; watching a hip hop band perform to backing tracks can often be underwhelming, but this cannot be levelled at M.I.A who holds the crowd captivated throughout.

The set fused together ragga, punk, hip hop, EDM and pop with ‘Paper Planes’ predictably getting the biggest reaction. It was great to hear some of the earlier stuff get an airing too, with songs such as ‘Sunflowers’ and ‘Galang’, whilst ‘Double Bubble Trouble’, ‘YALA’ and set closer ‘Bad Girls’ (all from her latest record), fitted in perfectly alongside.

This was the best live show I’ve seen in many years. Something unique that you will only get at an M.I.A. show. An unbelievable experience. Sorry Dolly, M.I.A. was the real Queen of Glastonbury.